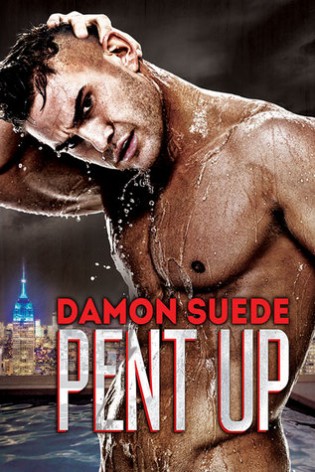 I’ve been dying for a new Damon Suede book for a while.  His voice is unique and different than other LGBT authors I’ve read in that he has a very “raw” and “real” narrative.  In this romantic suspense story about a billionaire stock trader hiring a bodyguard after some of his transactions might be putting him in danger, he still brings that raw and intense feel.  However, at times it felt a bit choppy for me to follow.

I must confess I have a big soft spot for gay-for-you stories, and this is sort of a double gay-for-you.  Both Ruben and Andy haven’t been with men before, nor had the desire, until they meet each other.  The character development in this is my favorite thing about the story.

Two alpha males who can be jerks struggling with their desires and impulses, not just physically but emotionally.  I have a thing for that.  I immediately fell for Ruben because he is just a mess.  He comes with quite a bit of baggage.  He’s recently divorced from his high school sweethear, without a lot of money, working security for his brothers company, living on his couch and a recovering alcoholic.  Not a pretty picture.  His attraction to Andy causes an added turmoil inside of him that he can’t fight for long.  There is so much he has to overcome to give in.  The fact that they are from a different race, different class, and even the fact that Ruben is older.  Oh yeah, and that he’s a man.  What would his family think?  Another fuck up to add to his list?

Andy on the other hand was a puzzle that we slowly had to put together.  We see this story from Ruben’s POV, and as we slowly peel back the truth about what’s happening, we get to see glimpses of what Andy’s life must’ve been like.  Small glimpses and definitely not as many answers about him as I wanted.  And the one thing that kept bugging me about him?  The drinking.  Because once he knew Ruben was a recovering alcoholic it just felt wrong for him to continue drinking.  Everything else about Andy?  I was all for it.

Then there’s the sex.  Raw, and a little dirty.  Seeing these two explore their sexual desires was explosive!  Not many can write hot sex like Mr. Suede can, and this book didn’t disappoint. 😉  It’s not apologetic.  It’s real and it can get messy.  So be prepared for that. 😉

I had a bit of a hard time with the suspense aspect of this story, which is probably the main reason I couldn’t dive in as much as I waned.  I couldn’t wrap my head around the danger looming and why it was happening at times and when I thought I had it figured out after one scene when things are explained better, I was anticipating a big confrontation … but then it was all solved rather quickly.  I feel like maybe I didn’t get it.  I didn’t see how that solution was able to make it all go away, and why didn’t that just happen sooner without all the suspense?

As always, I’m ready for what Mr. Suede has in store for us next.

He cared so much that there was no room to care about what anyone else thought.

“I got any say in this?”
“No.” Andy grinned.
“This is strictly between me and your cock.”