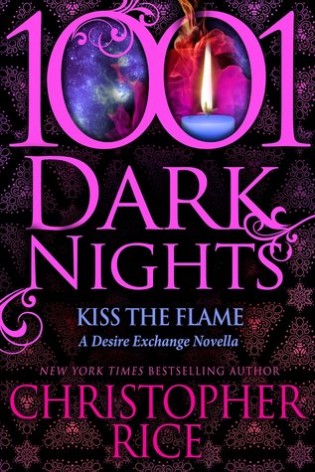 Kiss the Flame
by Christopher Rice

Christopher Rice continues his Desire Exchange series with Kiss the Flame, a novella that can stand alone, but builds on the world explored in the first two installments, The Flame and The Surrender Gate.  No longer a newcomer to Rice’s erotic voice, I had high expectations for a captivating and sexy read and I was not disappointed.  Laney Foley is an art history student from a disadvantaged background.  She’s been known to have a bit of a chip on her shoulder and is just starting to settle down and realize that she’s been unapproachable.  The biggest distraction?  Her sexy as sin teaching assistant, Michael Brouchard.  The feeling is mutual and it’s only a matter of time before they’re looking at violating the teacher/student boundary.  After a first date in the French Quarter that proves to Laney that Michael is as wonderful as she could have imagined, she spots a candle shop that draws her with a magnetic pull.  There’s something about the candle offered to her and the shop owner that raise the hairs on the back of her neck.  It’s more than it appears.  Will she give in to its pull or will she resist, heading the warning of the mysterious and beautiful Lilliane?

Christopher Rice knows how to write an atmospheric erotic story like no other.  I’ve said it before, but New Orleans comes alive in his writing.  You can feel every nuance of the city pulsing within the pages.  Laney is a character that made my heart ache.  She’s strong and accomplished, all without her family’s support.  She has a lot to lose and I didn’t blame her for being cautious about embarking on a relationship with her teacher.  Michael is beautiful and witty and most importantly, genuinely all in.  He fills a void in Laney’s life from the first date.  That sweet exterior covers up how hot and open Michael is when it comes to sex.   Their scenes together have that perfect combination of emotion and passion with a hint of dirtiness.  Laney turns the tables on Michael in one scene that had me catching my breath.  I loved that this novella answered some questions I’d had about the Desire Exchange while leaving me with a lot to ponder and for showing that a love that’s meant to be doesn’t always need a supernatural intervention.  There’s just something about a man writing erotic romance that draws me in like a moth to flame and Christopher Rice delivers  on it in a big way every time.  This world is unique and captivating and has so much potential for further development.

The cold metal of one of the fence posts presses up against her back, and that’s when she realizes he’s taken her into his embrace. His hands, his powerful, kneading hands, grip her waist, making the loose fabric of her dress feel as insubstantial as a blush of humidity. He brings their mouths and bodies together with the hunger of a hundred class sessions, a hundred long looks, a hundred fevered daydreams. As soon as she tastes him for the first time, she realizes the real question isn’t whether or not the passion between them is wrong or right, but how long would they be able to resist it?

She grips the back of his head, slides her fingers to the back of his thick, powerful neck. There’s that smell, his smell. Maybe it’s his cologne, or maybe it’s some intermingling of scents that are more purely, naturally him. Vanilla, campfires, and something musky. Only when she feels his palm grip the underside of her thigh does she realize she’s about to wrap her right leg around his waist, that her dress is sliding up her leg and if she doesn’t lower it soon she’ll be exposing herself right in the middle of Jackson Square.

Their lips part. He cups her face in his hands. She slides her leg back to the ground, slowly so as not to send the false message that his touch is repulsive; she just can’t risk exposing herself to passersby.

“You have two more questions,” he growls.

“One word answers only. Remember?”

“Yeah, and no yes-or-no questions either, remember? You still want to play this game?”

“It was your game, professor.”

“And you were being a very good bad little student.”

“Will you wait, Michael?”

“I already said I would.”

“Michael…” Her hands find his face, and somehow this touch feels more forbidden and electrifying than their passionate kiss, just allowing her fingers to gently rest against the hard angles of his face she’s studied day after day in class. To feel the heat of him in this gentle and unhurried way.

“Laney,” he says, in a gentle imitation of her own breathless voice.

“Even if I make you wait forever?”

By the age of 30, Christopher Rice had published four New York Times bestselling thrillers, received a Lambda Literary Award and been declared one of People Magazine’s Sexiest Men Alive. His latest novel is THE HEAVENS RISE, a supernatural thriller about a young woman who is exposed to a mysterious parasite in the Louisiana swamp that gives her the power to control minds and unleash living nightmares. THE HEAVENS RISE is currently a finalist for the Bram Stoker Award for Superior Achievement in a Novel. Together with his best friend, bestselling novelist Eric Shaw Quinn, Christopher recently launched his own Internet radio show. An outrageous and irreverent comedy variety program, THE DINNER PARTY SHOW WITH CHRISTOPHER RICE & ERIC SHAW QUINN streams 24 hours a day, 7 days a week at TheDinnerPartyShow.com, with new live episodes premiering Sunday evenings at 8 PM Eastern, 5 PM Pacific.

Christopher’s first novel, A DENSITY OF SOULS, was published when he was just 22. The controversial bestseller was greeted with a landslide of media attention, much of it due the fact that Rice’s mother is a legendary vampire chronicler who shares his last name. He served as a contributing columnist to The Advocate for many years and his additional criticisms and witticisms have been featured in The Washington Post, the Los Angeles Review of Books, Salon.com and his own Facebook page, which currently hails over 100,000 subscribers. The members of the InsightOut Book Club selected his novel BLIND FALL as one of the best novels of 2008, and his noir thriller LIGHT BEFORE DAY was hailed as a “book of the year” by mega-best selling thriller novelist (and Jack Reacher creator), Lee Child. His short fiction has been featured in the anthologies Thriller and Los Angeles Noir. He recently served on the board of directors of the West Hollywood Library Fund, which was instrumental in securing private funds to build a brand new state-of-the-art library in the heart of the city he now calls home.

Thanks for the review – I’m really behind on this series

Thanks for the review, it sounds good.

Are these available in print?