“From the beginning, I was sucked into the world that Galenorn created in Whisper Hollow”
~ Under the Covers

Diving into a new paranormal series is something I haven’t done in forever.   Yasmine Galenorn is a brand new author for me, which is hard to believe, I know! Autumn Thorns is book one in Whisper Hollow. Kerris Fellwater is a spirit shaman by birthright, helping to shuttle the dead to their final resting places. She left the town of Whisper Hollow fifteen years ago, but the unexpected death of her grandmother leaves a spirit shaman vacancy that demands to be filled. Kerris knows that she must take up the reins, but the job won’t be an easy one.  A darkness has come over the town, with an enemy working behind the scenes to destroy her line. The disappearance of her mother when Kerris was little is beginning to look like a murder. After moving into her grandparent’s home, a mysterious and intriguing neighbor named Bryan offers to help make sense of a place that seems to have more questions than answers.

From the beginning, I was sucked into the world that Galenorn created in Whisper Hollow. It felt unique, with a mythology that was complex enough to be challenging, but not so much that I was lost. This is actually quite a lengthy book, and I attribute that to both the world building as well as the descriptiveness. Each scene is set up with care and while I worried that it might become long-winded, I actually never reached the point where I felt it was extraneous and unnecessary. Kerris is smart and strong and THANK GOODNESS doesn’t run away from her destiny, either as a spirit shaman or in love. She and Bryan have explosive chemistry and surprisingly down and dirty sex. He has enough dominance in him to make this reader of erotica turn her head and notice. While the romance has a definite presence, it takes backstage to the main story which is the mystery of Kerris’ mother’s disappearance. Therefore, I would characterize this more as urban fantasy or paranormal suspense with romantic elements.  The mystery is well done and I was genuinely surprised at some of the twists and turns that are thrown our way. I haven’t read anything from the author on the direction of the series, but it’s clear that Kerris’ story is far from over, and I expect her to have an overlying story arc over multiple books. 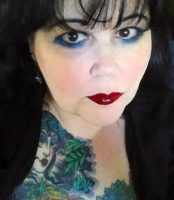 Sounds good…thanks for the review Jennifer

Sounds good, another one for my wishlist.