Join our newsletter to be the first to hear our latest news! Learn More
Home / Reviews / ARC Review: Dead by Midnight by Pamela Clare 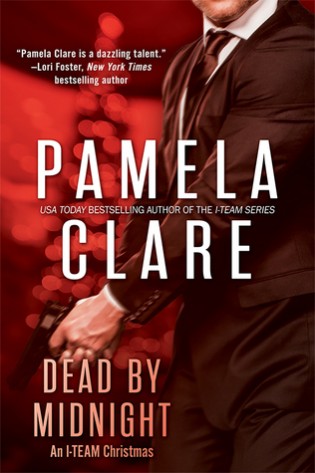 Dead by Midnight
by Pamela Clare

“If you’re a hardcore I-Team fan like I am, you definitely do not want to miss out on this story.”
~ Under the Covers

I’m such a sucker for Holiday stories but this one really intrigued me because it involved all of my favorite characters from Pamela Clare’s I-Team series. The gang is all here and it’s a furious ride until the end when some of our beloved characters are trapped and being held hostage by a number of gun-toting, angry men. Pepe, the leader of the hostage situation, wants his cousin out of prison. Until he is flown over and given a few million dollars as well, he still start killing people every five minutes until they are all dead.

On the outside, several people are working together to get everyone out safely. This includes an interesting twist that involves Clare putting another author’s character inside her story as well. I have read Callie Croix, Kaylea’s other pen name before but not her FBI Hostage Rescue series. I loved this aspect of the story and I think it really added a unique twist. I definitely will be checking out Cross’s series after this.

As I mentioned earlier, the gang is all here. I loved returning to some of my all-time favorite Romantic Suspense heroes. As of late, I felt as if some of the books have lost its magic but this novella really brought it back and got me excited about these characters all over again. My favorites are still Marc, Gabe and Dorkangelo (haha).

For the heroines, it was nice to see how they are doing now. I was especially excited about Kat, who I think readers will have the most connection to. Gabe and Kat in this story are really fantastic.

All in all, if you’re a hardcore I-Team fan like I am, you definitely do not want to miss out on this story.

Have you read any good ones this year? Surprisingly I haven’t read many this season. Usually I’ve read like 15-20 already.