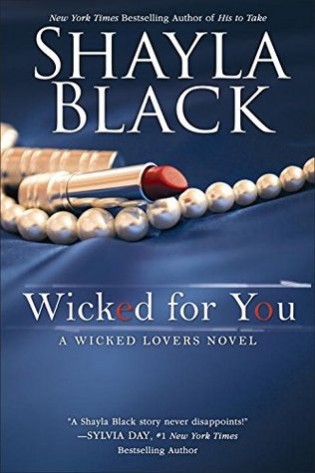 Wicked for You
by Shayla Black

“I wasn’t 100% sold on her motivations but I understand that to make a story like this work, Mystery had to be the one to take initiative. It just wasn’t my favorite in the series.”
~ Under the Covers

Mystery Mullins yearns for the man who once saved her from her dangerous kidnappers. Now, years later, she still isn’t able to forget Axel Dillon. Despite the flourishing career she has for herself in, she disguises herself and looks for Axel in a bar, propositioning him like she has always dreamed of.

Axel doesn’t remember her but after a night of unforgettable passion, he’s starting to wonder where he may know her from. The whole premise of this story is a little far fetched for my liking. The fact that Axel doesn’t even remember her, even with a disguise, makes me wonder how they can have such a connection on Mystery’s part that lasts years and years when he doesn’t even know who she is. It takes away some of the romance although I will say that I enjoyed Axel’s character for the most part.

Axel stays true to Shayla Black’s style. He’s intense, protective and hella sexy. He was definitely my favorite part of this book. Mystery, on the other hand, I was a little hot and cold over. She has some very admiring qualities about her but then sometimes I felt that her actions seemed to come out of nowhere sometimes and that really took me out of the story. I wasn’t 100% sold on her motivations but I understand that to make a story like this work, Mystery had to be the one to take initiative. It just wasn’t my favorite in the series.

I’ve only read two from the series including this one. I both liked and disliked the story. My thing with the story was Mystery. She drove me nuts. The suspense, passion, and Axel on the other hand worked for me.

I remember really enjoying the first few books in the series. All the heroes have been very hot. I think the trick is incorporating the mystery and suspense into the story where it fits better rather than being another entity.

Try the first few in the series. I remember really enjoying those ones.

Thanks for the review, I’ve only read the first few books in this series.