THE HOOK UP
Game On # 1
by Kristen Callihan

The rules: no kissing on the mouth, no staying the night, no telling anyone, and above all… No falling in love.

Anna Jones just wants to finish college and figure out her life. Falling for star quarterback Drew Baylor is certainly not on her to do list. Confident and charming, he lives in the limelight and is way too gorgeous for his own good. If only she could ignore his heated stares and stop thinking about doing hot and dirty things with him. Easy right?

Too bad he’s committed to making her break every rule…

Football has been good to Drew. It’s given him recognition, two National Championships, and the Heisman. But what he really craves is sexy yet prickly Anna Jones. Her cutting humor and blatant disregard for his fame turns him on like nothing else. But there’s one problem: she’s shut him down. Completely.

That is until a chance encounter leads to the hottest sex of their lives, along with the possibility of something great. Unfortunately, Anna wants it to remain a hook up. Now it’s up to Drew to tempt her with more: more sex, more satisfaction, more time with him. Until she’s truly hooked. It’s a good thing Drew knows all about winning.

All’s fair in love and football…Game on.

New Adult/Contemporary Romance with a HEA – Recommended for readers 17 and older.

She thinks he’s an arrogant playboy.
He thinks she’s an uptight prude.
But he’s about to make her an offer she can’t refuse.

Nicola Price used to have it all – a great career, the perfect boyfriend, an excessive shoe collection and an apartment in one of San Francisco’s best neighborhoods. But when she gets knocked up and her asshat boyfriend leaves her high and dry, Nicola’s perfectly crafted world comes tumbling down. And stays that way.

Now, Nicola is the proud single mom to a five-year old daughter and living a giant lie. She can barely afford their ghetto apartment and all the men she dates run when they hear she comes with a child. She’s struggling and scared – and nowhere near where she thought she’d be at age thirty-one.

Her saving grace comes in the form of a tall, handsome and wealthy Scotsman Bram McGregor, the older brother of her friend Linden. Bram understands a thing or two about pride, so when tragic circumstances place Nicola at rock bottom, he offers them a place to live in the apartment complex he owns. It’s pretty much the perfect deal, so as long as she doesn’t mind living beside Bram, a man that, despite his generosity, seems to antagonize her at every turn.

But nothing in life is free and as Nicola gets her feet back on the ground, she discovers that the enigmatic playboy may end up costing her more than she thought.

Those McGregor brothers are nothing but trouble…

HIS LADY BRIDE
Brothers in Arms # 1
by Shayla Black

Return to an age of danger and chivalry, when three daring knights—fostered together since boyhood in the warrior tradition—face their greatest challenge: winning the hearts of the women they love.

A passionate battle of wills…

He was a legend on the battlefield, but Aric Neville, known throughout England as the White Lion, had had his fill of intrigue and bloodshed. So he threw down his sword and walked away, to live a solitary life, cultivating a reputation as a sorcerer. But his prized tranquility was shattered when the villagers brought him a bride.

Gwenyth de Auburd was a raven-haired beauty too impudent to ignore and too tempting to resist. When the war raging around them sucked Aric into his past again, he also fought a losing battle against his undeniable desire for the luscious, willful maiden… only to learn that he had come to cherish as his wife. 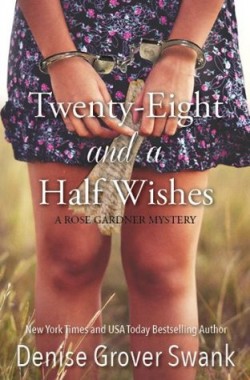 For Rose Gardner, working at the DMV on a Friday afternoon is bad even before she sees a vision of herself dead. She’s had plenty of visions, usually boring ones like someone’s toilet’s overflowed, but she’s never seen one of herself before. When her overbearing momma winds up murdered on her sofa instead, two things are certain: There isn’t enough hydrogen peroxide in the state of Arkansas to get that stain out, and Rose is the prime suspect.

Rose realizes she’s wasted twenty-four years of living and makes a list on the back of a Wal-Mart receipt: twenty-eight things she wants to accomplish before her vision comes true. She’s well on her way with the help of her next door neighbor Joe, who has no trouble teaching Rose the rules of drinking, but won’t help with number fifteen– do more with a man. Joe’s new to town, but it doesn’t take a vision for Rose to realize he’s got plenty secrets of his own.

Somebody thinks Rose has something they want and they’ll do anything to get it. Her house is broken into, someone else she knows is murdered, and suddenly, dying a virgin in the Fenton County jail isn’t her biggest worry after all.

Beneath # 1
by Meghan March

He loves me, and he doesn’t even know my real name.

The limelight that follows him could expose everything I’m hiding. But even knowing the risks, I can’t force myself to stay away.

I’m going to break his heart, but mine will shatter right along with it.

Will we lose it all when I reveal what’s beneath this mask?

Did someone say 99 cents? Yay. Thanks for the heads up!

I loved the Hook Up what an excellent deal.

Thanks for the deals & freebies news!