“…like a cop show with a bit of flare for the dramatic.”
~ Under the Covers

My level of enjoyment of POWER PLAY is a case of expectations.  The setup of this series is not something I tend to read a lot because it can get on my nerves, and I guess I didn’t realize this wouldn’t be an HEA book for the couple, but one of those love triangles that drags on throughout the series.  I’ve made those commitments before with some books, but believe me they’re not my thing.  And I wasn’t expecting that from this.  I think because of that I didn’t enjoy this as much as I probably could’ve otherwise.

Our heroine Sage is a bit of a workaholic.  She thinks very highly of her successful boss, Parker.  So much so that she hasn’t realized that all that admiration is actually something deeper.  When Parker becomes involved in a business transaction with the Russian mob, his old friend Ryker comes around snooping his involvement and immediately becomes quite taken with Parker’s assistant, Sage.  Detective Ryker that is.  And Sage finds herself in the middle of a bad situation not only between the two old friends and now sort of enemies, but in the middle of a very bad deal with the bad guys.

As far as the suspense element goes, this is actually really good!  Not that it’s suspenseful per se but it’s a good story, kind of like a cop show with a bit of flare for the dramatic.  Sage is just naive enough to want to do the right thing and ends up in situations that are a bit precarious.  She’s also in between two men that are polar opposites in many ways.  One the epitome of refined and successful, and the other the leather wearing, bike riding bad boy.  Reminded me a bit of Stephanie Plum in some ways, and the love triangle definitely goes in line with that as well.

I was hoping for a romantic resolution in the end, and we don’t get that like I mentioned before.  I’m not sure if I’ll continue and read the next book, maybe if I’m in the right mood for it this time.  The story in itself was good so I may pick it up when I’m ready for a good detective book. 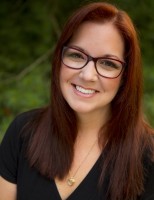 Tiffany attended the University of Missouri – Columbia, attaining two degrees in History and Social Studies Education. After working many years as an instructor and consultant in the Information Technology field, Tiffany now writes full-time.

Tiffany loves to read and has been reading romance novels since she was way too young to read such things. She has an unhealthy obsession for all things Doctor Who, prefers Pepsi to Coke and Absolut to both, thinks men who drink girly cocktails are wusses, has learned to never stop believing in her beloved St. Louis Cardinals, and can recite the entire scripts of When Harry Met Sally and Apollo 13. George Washington is cool, Bon Jovi still rocks the house, and Bruce Willis is the ultimate alpha-male hero.

Married with two wonderful daughters, Tiffany and her family make their home in Kansas City, Missouri, not far from where she was born and raised in St. Louis, Missouri.