Thank you for joining Riptide on our 4th Anniversary blog tour! We are excited to bring you new guest posts from our authors and a behind the scenes insights from Riptide. The full tour schedule can be found at http://riptidepublishing.com/events/tours/riptides-4th-anniversary-celebration. Don’t miss the limited time discounts and Free Books for a Year giveaway at the end of this post!

A retrospective—
By Amy Lane

So, this summer, my third child got to go on a trip to Europe.  It was called the “Tale of Two Cities” tour, and he saw London and France and I was emerald with envy.

I have been across the United States several times—three times by bus, car, or RV.  I’ve been to Canada a handful of times as well—but that’s it. Finis. No world traveling for Amy—at least not physically.

But mentally, I can visit with my son, and enjoy his pictures and stories—and, of course, there was always writing Country Mouse.

Aleksandr Voinov and I met online—we’re both M/M writers and we’re in the same circles—it was bound to happen. One day, we were both… well… bemoaning the loss of our separate mojos.  You know—having one of those days where kite flying or taking fencing lessons or learning a dead language all seem preferable to doing what you’re supposed to be doing?

Now, I’d read Aleks’s work before—and it was some sizzling stuff. Bisexual rakes who liked a little blood sport? Why the hell not!  So when Aleks told me to let him know if I spotted his mojo, I responded, “Hey, if your mojo ever met MY mojo, yours would leave mine face down on the couch covered in come.”

Yeah. Well.  I can make an impression.

Aleks contacted me offline and said, “Hey—you want to write a book together?”

So, uh, world traveling Aleks Voinov contacted me—someone who has lived in Nor Cal my entire life and asked me if I wanted to write a book.

Three guesses as to who the “country mouse” is in the title—but you probably only need one.

And given how mismatched we were, Aleks and I sort of embraced that while we were working.  He said, “Where do you want to set your book?”

I said, “Anywhere but here.”

England it was, and our protagonists were the slick, world-weary banker and the wide-eyed, ready-for-anything traveler—and we were ready to roll!

We had fun with that—he would send me pictures and links of where Owen and Malcolm would visit, where they would eat, where they would tour.  I’d let him do the travelogues, and I’d give my—er, “Owen’s” – honest reaction to the places we’d go. It was, in a way, like traveling without leaving my front door.

I did feel bad though—I had nothing to share. At one point, the family and I were returning to Sacramento from San Diego—Aleks sent me an email with pictures of some of London’s most interesting historical attractions—Big Ben, Trafalgar Square, The Tower—and all I had to send him was the ruined alien desert of I-5.  He said it looked terrifyingly desolate.  I told him I was really glad we’d decided to set our story in London!

I will never forget writing the end of Country Mouse—mostly because my kids were all still young enough that they had no patience. It was seven o’clock California time, and very early in the morning in England, and we were…

We were rolling. We knew where this was going, and the cursor on Google Docs was moving practically independently. We just… just grooved. This story was rushing to it’s conclusion and who needed to stop and get milk, to stop and make dinner, to stop and do anything—this story was cruising at maximum velocity and who in the hell were we to stop it?

We finished in that rush, that high, and I know I stared at the screen for a moment and went, “Wow. That’s amazing. I can see why people co-write now!”  And then I went and bought milk.  *shrugs * What can I say? Real life doesn’t go away because magic happens, right?

But that rush was enough to push us to the second one, and I enjoyed that very much as well, even though it was much more craft and a little less “lightning rod of the gods”.  We both could see a place for the third and the fourth etc, but we were also both really busy, and pretty committed. I think not being able to write Country Mouse Three was maybe my first real lesson in the fact that just because I’m a writer that doesn’t mean I can write all the things.

I’d still like to write Country Mouse Three someday—and I’d love to work with Aleksandr Voinov again.  But sometimes I think it’s my penance for that glorious rush of finishing the first novella.  For the two hours of real life I put off to make magic scroll across my screen, I think I might have to wait a couple more years to plow through real life before Aleks and I can see that happen again. 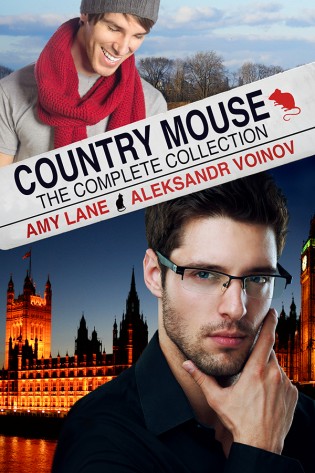 Owen may be a bit of a country mouse, but he loves his vacation in London, even more so when he meets the sexy and arrogant Malcolm Kavanagh. But eighty-hour weeks at a trading desk don’t leave Malcolm much time for meaningful relationships. In his world, everything’s a competition—even sex.

Their vacation romance turns serious, but that’s just the first chapter in their story. Anyone who’s ever been in love knows that happy endings take a lot more work than declaring your feelings.

Malcolm has never been in love, or even in a relationship. Everything is a struggle, from accepting Owen’s low-status job to putting his boyfriend above his personal trainer. Luckily, Owen knows a little more about these things. From the art galleries of Cambridge to the tawdry majesty of the Dominion theatre, Owen adapts to England while Malcolm adapts to the whole human race. Maybe, if Owen is patient enough and Malcolm learns to give, the two of them can make it past Relationship Armageddon to a real happy ending.

The Country Mouse collection is being sold in a special discounted bundle by Riptide this week only.  Click here.
Check out the sale on this series and other bundles shopping the Anniversary Sale at Riptide Publishing.

To celebrate our anniversary, Riptide Publishing is giving away free books for a year! Your first comment at each blog stop on the Anniversary Tour will count as an entry and give you a chance to win this great prize. Giveaway ends at midnight, October 31, 2015, and is not restricted to US entries.

What a great giveaway! I’m a big fan of so many authors represented by this publisher.

Thanks for the post, I’ve read Amy Lane before and have enjoyed her work but have yet to read anything from Aleksandr Voinov. I’ve enjoyed numerous Riptide Publishing books and I am getting ready to pre-order another.

Happy Anniversary! Incredible give away! Would love to win!

That’s the great thing about reading: I can go to way more places than my budget will allow. Plus, I get to “revisit” places I have been to many, many years ago (like London).

Happy Anniversary! What an amazing giveaway. Thank you :).

I’ve ‘visited’ some great places with my reading – I do like it when I have to google things!

This is such a fun thing to follow. Thanks for taking the time to do this. <3

Sounds like a fun co-write! I hope you get to continue

Great post Amy you and Aleks wrote amazing books and I hope you will be able to write another in the future.

Happy Anniversary! That is quite a generous giveaway in celebration. Thank you so much! I look forward to reading these two authors.

Love, love, love Amy Lane!! Thanks for the chance with this amazing giveaway! Happy Anniversary!

Happy Blogiversary. Thanks for the giveaway.

Happy anniversary, Riptide! I wish you nothing but a good luck for the future and of course happiness too. Thank you so much for the chance of winning! 🙂

I’m in such awe of people like Amy and Aleks who can be so creative and bring me such enjoyment. I love you all. Thank you Riptide.

This is just awesome, thank you!

This looks like a great read! Thank you for sharing.

Happy Anniversary!!! Awesome giveaway!! Thanks for the chance

So, excited about this contest. Love Riptide and finding new authors!

I have found so many new authors and books during this Anniversary celebration. Thanks for the giveaway and Happy Anniversary!

Happy Anniversary and thanks for this awesome giveaway — would love getting new books by some of your awesome authors !

This is an amazing giveaway! I’d never run out of books to read!

Country Mouse was a great collaboration. I really enjoyed both stories. 🙂

Ooo, offered in a bundle you say? *steeples fingers and grins*