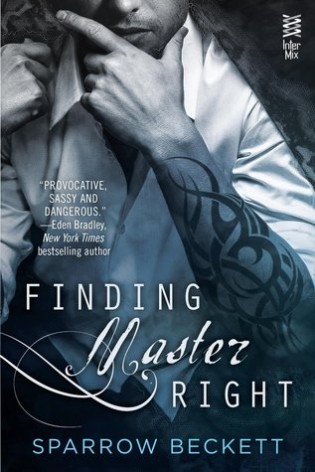 Sparrow Beckett is a writing team of two kinky authors who have come together to bring us the new Masters Unleashed series.  Finding Master Right is book one of this endeavor.  Kate is intrigued and turned on by the thought of being controlled by a dominant man.  When her friend invites her to a D/s matchmaking party, she finds herself unsure and doubting what she wants.  Her friends think Banner would be the perfect Dominant to help her discover what kind of Dom she wants, no strings attached.  Banner is looking for a slave, not a submissive, so it should be easy for him to show her the ropes and then let her loose to submit to the perfect Dom.  Things seem to never go as planned, as both Banner and Kate find it almost impossible to resist the pull between them.  If they’re able to find a common ground remains to be seen.

As you might be able to tell from my usual reads, I often gravitate towards the darker side of BDSM.  In that sense, Finding Master Right is a bit out of my norm.  I wasn’t sure from the blurb that I would be able to enjoy an “introduction to BDSM” themed book.  It’s a pleasure to be proven wrong here, because I really did love this one.  At first glance, Kate might seem to be that friend that wants to try something new and wild for reasons that are hard to comprehend.  She really doesn’t know what or who she wants at the onset, but that’s certainly a realistic position for someone to find themselves in.  She’s also a bonafide brat:  snarky, funny and really very cute.   Banner might want a slave, but he’s approachable and good-natured, up for the challenge that Kate proves to be.  What made the book for me was the realistic dialog and the genuine chemistry between the characters.  Kate challenges Banner mercilessly and he doesn’t back down, but he accommodates her needs and adjusts his own expectations.  The negotiations they go through, the give and take, really is a great look at a successful and healthy start to a D/s relationship.  The chemistry between them made the sex scenes smoldering hot.  I couldn’t get enough of seeing these two banter back and forth.   You could feel Kate’s need, her desire to be topped, bleed through her protective outer core.   I wanted to slap Banner for thinking he knew what was best for Kate at one point, but he came around in the end.  I know this was written by a writing team, but it was so seamless that I wasn’t able to tell, even with viewpoints switching here and there.  I was absolutely hooked from the beginning and it was a truly fun read.  In the end, it’s refreshing to see characters that aren’t plugged into the cookie-cutter images that we expect.  “Fun” BDSM books that don’t lack substance are also hard to come by.  I think Finding Master Right is a perfect intro for someone to the genre, but also very satisfying for the more experienced reader. 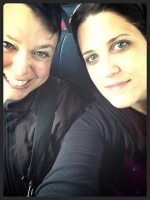 Thanks for the review and the cover is gorgeous.