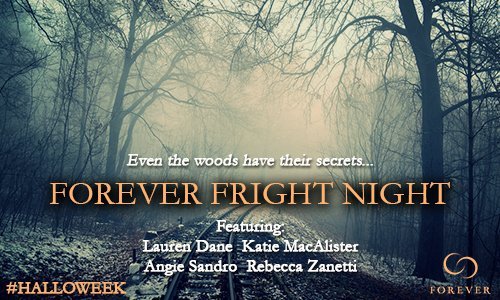 “Name’s Dane.” Hot neighbor stuck out his hand. “Dane Allen. You are the woman who lives next to me, right? The one with the sick dog?”

“I’m Everly, and Napoleon isn’t sick. He has a voice situation,” Everly said, bristling slightly on behalf of her beloved pug. “The vet thinks it’s a deformity that makes him…well…”

A low sound came from the back seat of the Mini, kind of a cross between a roar and a cough.

Dane jumped in his seat and turned around to look, his grey eyes wide with concern.

Everly loved grey eyes on a man. Even one who cast slurs at Napoleon.

“Go back to sleep, Napoleon,” Everly told her dog, who luckily, spent a good twenty-three hours a day doing just that. “We’ll be home soon.”

He wheezed asthmatically at her guest, then curled up and went back to his nap.

“Sorry if I was rude,” Dane said, flashing her another one of those smiles that made her heart shift into high gear. “I like dogs. A lot.”

“Uh huh.” Everly decided to let that point go. “What exactly are you doing out here in the middle of nowhere? Not that I don’t appreciate you checking on me—as it happens, my engine chose this spot to give up the ghost.”

“We’re filming,” Dane said, nodding toward the woods on the side of the road. “At the old Nightingale place.”

“The asylum?” A little parade of chills marched up and down Everly’s back. “Are you insane?”

Dane groaned at the inadvertent pun.

“Sorry, that was totally unintentional,” she apologized. “But seriously, are you crazy? Why are you filming at an old, haunted, abandoned, haunted, mildewy and falling down, and did I mention haunted insane asylum?”

“Because it’s my job for the next three weeks. I’m doing some freelance film work for Abandoned America. Do you watch the show?”

“No. Well, yes, but only a couple of times,” Everly admitted. “The shows I saw were in Arizona, though, not anywhere near here.”

“That’s because they film all around the country, hiring local teams to film whatever weird places that are the focus of area folklore. And the Nightingale Asylum is their choice for our neck of the woods.” He looked out the window when a rumble of thunder warned the storm was not yet over. “Literally our woods.”

Everly gripped the steering wheel tightly. “I can count on one finger things I would rather do less than be at the asylum in the middle of the night.”

“It’s only a little after seven,” he pointed out.

Everly shook her head. Handsome as sin he may be, what with those grey eyes and long black lashes and a little dip in his chin that made her palms a bit damp, but the man clearly had a few bats lose in his belfry. “It could be high noon and it would still be too creepy.”

“Would it make you feel any better to know that I wasn’t there alone? I handle the Steadicam, while another freelancer, Pablo, has the handheld camera. You know, the one that makes it look like you’re tagging along with the ghost guys as they investigate the buildings. In fact…” He glanced at his watch. “I’d better get back up to collect Pablo. You want a ride into town once we pack up our equipment?”

“That would be wonderful,” Everly said, deciding that perhaps her car dying out in the boonies, in the middle of the storm, right next to an old haunted asylum might not be the worst thing to ever happen to her.

She collected a sleepily protesting Napoleon, putting him into his carrier, and with her purse, her signal-less phone, and dog, followed Dane down the road a few yards before turning up an overgrown dirt drive.

“You didn’t see anything weird inside, did you?” she asked a bit nervously as they plodded up the drive. Either side originally had been lined with elms, but after decades of neglect, willows, oaks, and cedars had sprouted up, choking out the once stately elms.

“Are you afraid of ghosts?” he asked, a teasing smile lighting up his eyes.

“No,” she said slowly, her heart thumping suddenly when they rounded a curve and the hulking monstrosity that was the Alfred P. Nightingale Asylum for the Mentally Unhinged blotted out the already dark sky.

The asylum was every bit as horrible as she remembered.

“It’s just that…well, to be honest, I have a bit of a history with the place.” Her fingers tightened on Napoleon’s carrier. “Not a pleasant history.”

“Really?” Dane did an adorable head tip that was almost enough to make her forget where she was. “Want to tell me about it? It might be something we could use on the show.”

“I’ll pass, thanks. So, change of subject time! How are you liking living in the neighborhood?”

“It’s great. I have a gorgeous neighbor on one side, and nice old lady who makes me cookies on the other.” His teeth flashed white in the darkness. “Couldn’t ask for more.”

“Maybe you’d like to come over for dinner one night,” Everly said with studied nonchalance, her nerves taking a break from being frightened of the asylum to being on edge over asking out a near-stranger. A handsome near-stranger. Who lived conveniently next door. Hoobah!

“I don’t know how to hmm, but I’m willing to give it a shot,” she said in a bright, perky, ‘I want to flirt with you, but I’m not sure how you’ll take it’ sort of voice.

“No, that hmm wasn’t for you.” They’d reached the front entrance of the asylum by that point. Cracked masonry dotted the ground, while tall, almost waist-high tufts of wild grasses fought with ferns and misshapen arbor vitae shrubs where once there must have been a pleasant lawn. The steps were cracked, with bulbous mounds of moss forcing the cement apart. And beyond the steps… Everly did her best to ignore the massive building that loomed over her, menace dripping down on her like rain.

“Pablo should be here,” Dane said, looking around. “He was filming the entrance hall while I got some exterior shots—that’s what I was doing when I found you. But I don’t see him. You stay here and I’ll go in and see if he’s fallen through a floor or something.”

A massive wave of panic washed over Everly at the sight of Dane—large, strong, extremely comforting Dane—opening one of the double doors and disappearing inside.

Thunder rumbled ominously, and a strange wind picked up out of nowhere, ruffling her coat and hair and making Napoleon grumble an objection.

“Wait!” a voice squeaked. She was horrified to find it belonged to her. Worse, her feet were taking her up the four steps to the door. “Don’t leave me out here alone.”

The doorway turned into a gaping black maw, taunting her with memories of the past, mocking her cowardice, and reminding her that although she was a strong, confident woman now, there was a time when she was something else.

“Come along then,” Dane’s voice called out from inside the maw. A light fluttered into life as he turned on a camping lamp, and held it up high to look around the entrance hall.

It was empty of all but footprints trailing across the dust-caked marble floor, fading away into a dense, inky blackness.

With her stomach turned to lead, Everly glanced around outside, shivered at the choking sense of foreboding that seemed to leech up from the ground. Drawn to the safety of Dane and his light, she stepped inside the building, Napoleon’s carrier clutched tight to her chest.

She just hoped she’d come out again in one piece.

Continue reading at: Smexy Books | Ever After

TURN ON THE CHARM

According to some (including himself), Constantine is one of the greatest heroes of dragonkin who ever lived. Too bad he's now lonelier than ever and his biggest adventure involves a blow-up sheep—until he has an opportunity to save his kind once again. All Constantine has to do is break into a demon's dungeon, steal an ancient artifact, and reverse a deadly curse. The plan certainly does not involve rescuing a woman...

TURN UP THE HEAT

Bee isn't sure whether to be infuriated or relieved when Constantine pops up in her prison. The broody, brawny shifter lights her fire in a way no one ever has before, yet how far can she really trust him? Their chemistry may be off the charts, but when push comes to shove, Constantine will have to make a crucial choice: to save the dragons or the woman he's grown to love with fierce intensity.

For as long as she can remember, Katie MacAlister has loved reading. Growing up in a family where a weekly visit to the library was a given, Katie spent much of her time with her nose buried in a book. Despite her love for novels, she didn’t think of writing them until she was contracted to write a non-fiction book about software. Since her editor refused to allow her to include either witty dialogue or love scenes in the software book, Katie swiftly resolved to switch to fiction, where she could indulge in world building, tormenting characters, and falling madly in love with all her heroes.

Two years after she started writing novels, Katie sold her first romance, Noble Intentions. More than thirty books later, her novels have been translated into numerous languages, been recorded as audiobooks, received several awards, and are regulars on the New York Times, USA Today, and Publishers Weekly bestseller lists. She also writes for the young adult audience as Katie Maxwell.

Katie lives in the Pacific Northwest with her husband and dogs, and can often be found lurking around online. 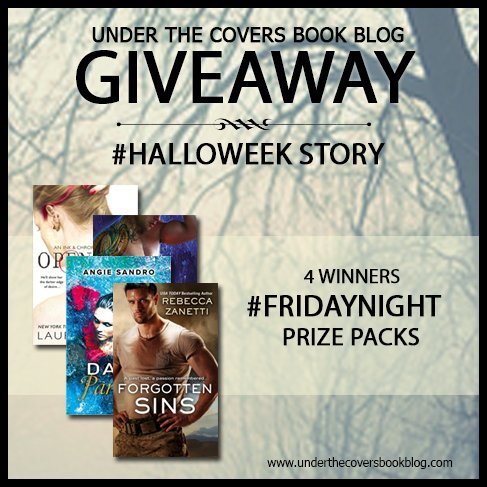 4 winners will receive a #FridayNight pack including these four books!

[…] One by Lauren Dane is over at Dear Author, while Part Two by Katie McAlister is at Under the Covers, and Part Three by Angie Sandro is at Smexy […]

My favorite Scary Story is actually Riptide by Douglas Preston and Lincoln Child.

I’m not a big fan of scary stories, but one that stayed with me is The Lottery.

my fav of all time is pet cematary!! still creeps the f##k out of me!!

Thanks so much for the opportunity! I love Halloween!!

Wow! Not my ususal flavor to read but now I’m hooked on “Forever Fright Night”…have to find out what happens!
Thanks, pal 😉

A child’s book of short stories named in a dark, dark room!

I don’t normally read horror, but The Witching Hour by Anne Rice really creeped me out. Happy Halloween!

It or The Shining by Stephen King

I try to avoid reading stuff that is too scary, by and large, but The Telltale Heart was assigned as school reading, and well, still scary! LOL!

No scary stuff for me.