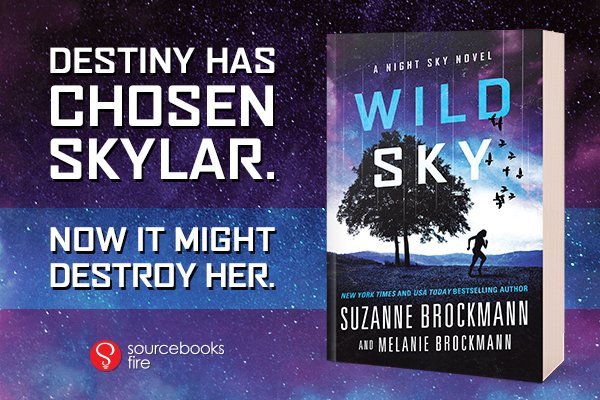 Message From The Authors Suzanne and Melanie Brockmann

Mel:  Wild Sky is a paranormal story, set in Florida, approximately fifty years in the future. In this world, a small percentage of people, mostly girls and young women, are born with a chemical in their blood that gives them superpowers like telekinesis or extraordinary strength.

Suz: Nicknamed “Greater-Thans” or “G-Ts,” these girls have been targeted for kidnapping by bad guys who harvest their blood and use it to manufacture a drug called “Destiny.” Destiny is extremely expensive, highly addictive, and ultimately fatal, but before the user dies from it, the drug reverses the aging process, heals illness and injury, and gives the addict super powers, too.

Mel:  It’s pretty scary stuff!  Oh, and just an FYI: Although Wild Sky is the sequel to Night Sky, you don’t have to readNight Sky for Wild Sky to make sense!

Suz:  All you really need to know is that in Night Sky sixteen-year-old Skylar Reid discovers that she’s a Greater-Than with some serious superpowers.

Mel: And that Sky and her best friend Calvin–a really upbeat kid who’s spent most of his life in a wheelchair–have some dangerous adventures with another tough-girl G-T named Dana, and Dana’s extremely (ahem) attractive sidekick Milo.

Suz: Sky and Milo really hit it off, so in Wild Sky, they’re a bit of an item.

Mel:  A bit! In Wild Sky, Sky and her friends get into more trouble as they search for Dana’s sister, Lacey, who disappeared years ago and has been presumed dead.

Suz: But now Sky’s got reason to believe Lacey’s being held captive in a Destiny “farm.”  And of course, high jinks ensue, and our beloved character Calvin is put into extreme danger–although throughout most of it, he holds onto his crazy sense of humor!

Mel: We both love Calvin very much!

Suz: And Sky does, too!  When we developed the Night Sky series, we wanted to center it around a main character we could easily relate to. And even though we grew up in very different circumstances –

Mel: Mom has an older sister, I have a younger brother. My dad was a lawyer, my mom a writer. My mom’s parents were both teachers.

Suz: I grew up listening to the Beatles –

Suz: But despite all of those superficial differences, Mel and I shared experiences far too common to teenage girls. Waves of self-doubt, with occasionally soul-crushing periods of insecurity.

Mel: Yet even at our lowest moments, we knew that there were things we were really good at.

Suz: And that’s where Sky came from. A young woman whose primary goal is to fit in with her peers, but whose G-T status makes that virtually impossible. Or so she believes.

Mel: Of course, her friends recognize Sky for who she really is – a funny, loyal young woman with a huge heart — whose superpowers only add to her awesomeness.  But for Skylar, nothing comes easy. Everything seems to be on shaky ground – her budding romantic relationship with Milo, her ability to help Dana find Lacey, even her friendship with Calvin.

Suz: It’s that very human mix of vulnerabilities and strengths that make Skylar so special.

Mel: We hope readers see Wild Sky as not just a really exciting, action-packed adventure, but a story about Skylar’s quest – and really every teenage girl’s quest — to own her awesome.

Suz: Because we truly believe that everyone is born with abilities that – no matter how seemingly small or insignificant — should be recognized and celebrated! It is our differences that make us Greater-Than. 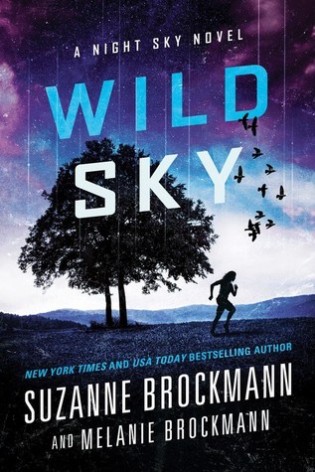 Skylar Reid is slowly adjusting to the powers that make her a Greater-Than; it's the rest of her ''normal'' life that's too hard to handle. Her boyfriend is distant, and her mentor is obsessed with rescuing her sister from the producers of the Destiny drug. Then a secret Destiny lab pops up in Skylar's town, and her best friend Calvin is accidentally injected. After spending years in a wheelchair, the drug gives Calvin the ability to walk-- but could cause him to lose his mind. Can Skylar master her abilities to protect her friends before the danger she attracts destroys them?

I wish I could say I’d never witnessed a windshield shatter before, but I’d been in a terrible car accident a few years back, so Iknew exactly what it looked and sounded like.

There’s a weird silence that happens immediately after something like that, in which everything seemed to occur in slo-mo. Iforced my mouth to move.

“Gunshot!” I shouted, because I could see both Cal and Garrett looking wildly around, trying to process exactly what that noisewas and what had just happened. “Bullet to car window! Over to the right.”

The broken windshield belonged to a beat-up sedan parked two slots down from us in the Sav’A’Buck lot. Someone had fired a gun,just once, probably from somewhere near the grocery store’s front doors, judging from that broken front window. Shards of glassmade tinkling sounds as they careened off the front of the car and onto the pavement.

“Gunman at the store door, get down get down get down!” Calvin shouted, and I stupidly turned to look instead of diving onto thefloor of his car, and he grabbed me by the shirt and yanked me down just as the shooter must’ve flipped the switch from one shotto massacre, and the gun began going off, popping bullets through the air.

I braced for them to hit Cal’s car, covering my head as I prepared for a rain of glass, but the man with the giant gun must’ve beenpointing it in a different direction, because I heard the ping of punctured metal and breaking glass, but it wasn’t from our car.

I could hear someone screaming—high-pitched and frantic—even as Garrett yelled, “Calvin, drive!”

“Don’t,” I told Cal as I closed my eyes and focused on that glimpse I’d seen before he’d pulled me to relative safety.

A big gun. And something else…?

I focused on calling up the image, and yes, he was carrying some- thing under his left arm, some kind of brightly colored sack,with his assault rifle tucked into his right elbow—this tall, broad man, maybe twenty years old, buzz cut, scar above his eyebrow.

That screaming—it had been a child’s voice. She was silent now, but I realized with a flash that I hadn’t seen a colorful bag butinstead the cheerfully patterned clothing of a little girl. That man with the gun was abducting a little girl. And I bet I knew why.

“Gimme!” I said and reached back to grab one of the water guns from beside Garrett.

I didn’t wait to hear what he thought I shouldn’t do. I’d yanked my hood up over my head, hiding my red hair and as much of myface as I could, and I was already out of the car and on the asphalt, heading toward the man who was still firing that gun. He wasusing it not to kill, thank goodness, but to keep the little girl’s family from following him. I could see with just one glance that she wasunconscious, as he tossed her none too carefully into the passenger seat of his shiny black Bimmer. He had a nice car. And I was prettysure I knew how he’d paid for it—by kidnapping little girls like this one, like Sasha, too, and selling them to the Destiny makers.

“Hey! ” I belted out. But my voice was buried beneath the cacophony of his weapon. I had to move fast, or he was going to getinto his snazzy car and that little girl would be gone.

I took a deep breath and concentrated. Water versus bullets? Not normally much of a contest there.

But I could do this. Couldn’t I?

Suddenly, I heard Dana’s voice in my head, shouting Fail! Fail! What are you doing, Bubble Gum? You have no backup, you have noplan!

What was I doing? This was insane.

Still thoughts. I closed my eyes and pictured Milo. I breathed him, I felt him, I heard him. Still thoughts, Sky. Just let it go…

And in that moment in which I was specifically not thinking about what I was about to do or what the consequences would be if Ifailed, I felt and then saw my enormous pile of plastic water pistols—there were sixteen of them total—shoot out from thebackseat of Calvin’s car and through the passenger side window that I’d left open. They streamed toward me like metal particles toward a magnet.

Then, just as quickly, all but one—a little green one—swooped in front of me before lining up and hovering in midair.

The little green plastic water gun zoomed over to the man with the real gun and smacked him in the face.

“What the hell…?” He fumbled his weapon as he turned to see me standing there—me and that collection of water guns—and his eyes widened.

“Holy shit, Sky!” With the noise from the assault weapon silenced, I could hear Garrett shouting, and I winced inwardly becausehe’d used my name.

But whatever he said next was muffled, and Cal’s voice rang out instead. “Hoshitski, look out!”

It was an intentional misdirect, and I tried to stand like a Hoshitski might, no doubt surly from years of being teased. I pitched myvoice lower and ordered, “Drop it! Now!”

The gunman’s wide eyes narrowed, and we both knew he wasn’t going to drop his weapon, so before he could turn and killme, I let loose my TK and blasted him. All of those plastic guns shot water from their barrels with the intensity of sixteennarrow but powerful fire hoses, and it sent the man down onto the ground so hard that I heard his head as it smacked against the pavement.

The gun he’d been holding clattered to the ground.

All of my weapons ceased water-fire and dropped onto the pavement in front of the unconscious shooter.

The silence that followed was eerie. I felt a little dazed, standing there with a single, silly-looking pink water gun still in myhand, staring at the downed man and his big real gun, and then over at the bullet-riddled storefront of the Sav’A’Buck. 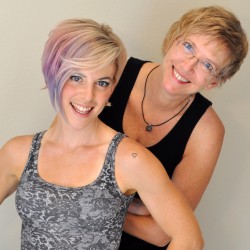 Suzanne Brockman, a New York Times and USA Today bestselling romance author, has won 2 RITA awards, numerous RT Reviewers’ Choice, and RWA’s #1 Favorite Book of the Year three years running. She has written over 50 books, and is widely recognized as a “superstar of romantic suspense” (USA Today). Suzanne and her daughter, Melanie Brockmann, have been creative partners, on and off, for many years. Their first project was an impromptu musical duet, when then-six-month-old Melanie surprised and delighted Suz by matching her pitch and singing back to her. Suzanne splits her time between Florida and Massachusetts while Mel lives in Sarasota, Florida. NIGHT SKY is Mel’s debut and Suzanne’s 55th book. Visit Suzanne at www.SuzanneBrockmann.com. 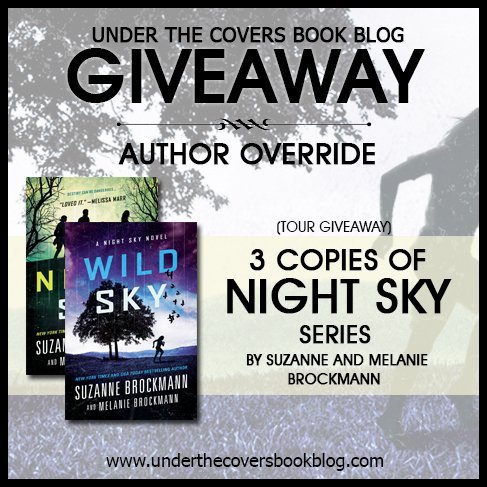 I just have to say how much I love and adore Mel and Suz. They are awesome as people and writers. I had the pleasure to meet and chat with them at RT a couple of years ago. Cannot wait to read this mother/daughter series 🙂

Thanks for the interview and excerpt.