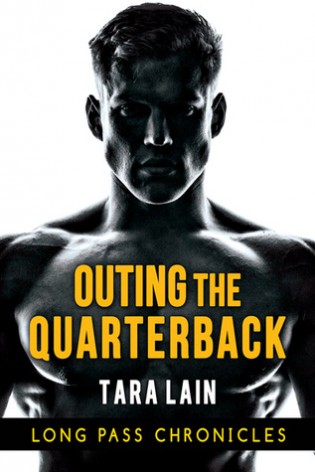 Outing the Quarterback
by Tara Lain

“I liked Noah and Will as a couple…I just wish Will would’ve been a stronger character.”
~ Under the Covers

This is the first book in a new sports themed new adult series by Tara Lain.  I’ve enjoyed her work in the past so I was definitely excited to see how she fit in this niche theme.  There were things I enjoyed about this book, and things that didn’t quite hit the mark.

Will Ashford is a college quarterback.  He’s followed in that path mostly due to his rich father, who has a passion for the game and is living through his son’s accomplishments.  Will is also very much gay but definitely in the closet, while trying to keep appearances and have a girlfriend that his father approves but he can’t stand.

What Will wants is to paint.  So he enters a class that will hopefully give him a chance at an art scholarship.  And in that class he meets a man he can’t help but be drawn to.  Noah is out and proud.  He’s struggling to make ends meet, keeping several jobs so he can pursue his passion for art.  He doesn’t need the complication of a closeted jock in his life but he also can’t seem to stay away.

I liked Noah and Will as a couple.  I think their interactions were sweet and hit the mark on starting with a friendship and ease to moving forward somewhat quickly to a physical connection.  I just wish Will would’ve been a stronger character.  His decisions and the lack of strength to stand up to his father because of money and what will I do with my future took away from me really connecting with him as a character.  I just couldn’t feel bad for him when a simple take charge decision would’ve solved his problems.

I did enjoy the group of characters though and I’m excited to read the next book in the series!

Thanks for the explanation of will..

Thanks for the review, I agree I dislike weak characters they annoy me.