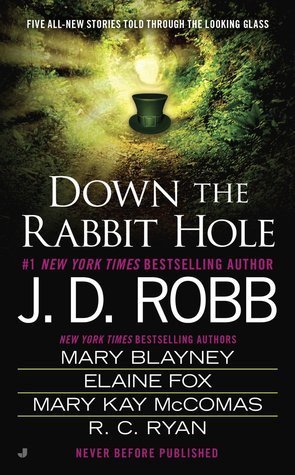 “While each theme is different whenever a new book is released, the stories are always entertaining as the authors do their take on the classic fairy tale.” ~ Under the Covers

All these stories are loosely inspired by Alice and Wonderland so as a fan of Carroll’s original work, I was excited to read these collection of short stories.

This anthology has stories from several different genres. I’ve been on a Romantic Suspense kick so Robb’s story was the perfect read to fit my mood. I love these collections between these authors because while each theme is different whenever a new book is released, the stories are always entertaining as the authors do their take on the classic fairy tale.

When a murder/suicide occurs between a close brother and sister, Eve is on the case, trying to figure out who really is behind this mysterious occurrence. Naturally, this was my favorite of the collection because reading about Eve and Roarke just make me very happy. I don’t know why but I feel like I can read about them doing absolutely nothing and still find it enjoyable. Robb takes on a more sinister approach to this story, but I think it matches the theme very well.

Next to Robb’s story, I really enjoyed Mary Blayney’s contribution. I don’t normally go out and read her books so it’s nice to have a chance to discover her writing through this anthology. I thought the way she incorporated the Alice and Wonderland theme made for a very unique read.

I don’t read anthologies unless it’s a compilation of one author’s works….but I do enjoy hearing about the stories…

Thanks for the review, I doubt I’ll ever read this series since it’s already at book 41.

The books stand alone perfectly fine as its a different mystery/case each book. But of course, the character development won’t be there for you if don’t start at the beginning. They are still amazing reads though! One of my all-time faves.

“I can read about them doing absolutely nothing and still find it enjoyable. ”

This is spot on! After Devoted, I can’t wait to get into Wonderment for one last Dallas investigation before the end of the year.

Under the Covers Book Blog
Admin
Reply to  Troi