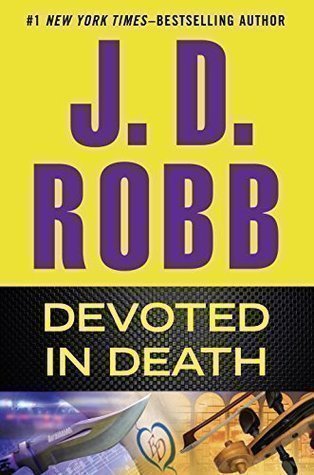 Devoted in Death
by J.D. Robb

” It’s like coming back to old friends. Over the course of these forty-one books, Robb never fails to enchant her readers.”
~ Under the Covers

Once separated, Ella-Loo and Darryl vow never to be parted again. As they go off to follow their dreams, they are stalled when their car breaks down. Ella-Loo plays up the act and hails down a good Samaritan who offers to help except instead of just knocking him out, Darryl and Ella-Loo actually kill him. This sparks a desire to kill and now these two lovers don’t just feel great desire for each other, they desire to hurt, kill, maim others too.

Eve Dallas and her crew are on it, trying to stop the murders from happening. What I liked about this book is that the readers who know the killers are, but Eve doesn’t. Sometimes Robb changes this up and I think that’s why the series has been able to go on for as long as it has. Every case is different and not only that, but Robb has approach her differently, revealing clues here while holding back information until it’s the right time. In doing this, it keeps things fresh even when the cases may not be especially unique.

Ella-Loo and Darryl were not my favorite villains but their presence does add a little bit of drama and even some romance to the series that isn’t solely focused on Eve and Roarke. Although sometimes twisted, it’s a nice refresher since we’ve followed a lot of the same characters over the course of the same series.

That being said, Roarke is still present in this book but he doesn’t step in until a little later on. I was a teeny bit disappointed in that because while I enjoy reading about the cases and love Eve Dallas to death, I’m going to be completely honest with everyone and say that I read these books because of Roarke. He just makes everything better and he’s a fantastic sidekick for Eve (although I do still adore Peabody, don’t get me wrong!).

There’s just something so very comforting about reading these books. I know that may be strange to say about books that center around murders but returning to this world, to these characters, it’s like coming back to old friends. Over the course of these forty-one books, Robb never fails to enchant her readers.

You have to read at least one, Timitra. Just so you can say you’ve “met” Roarke.

Thanks for the review, I doubt I’ll ever read this series since it’s at 41 books.

This series is cool because while they follow the same characters throughout, each book is a new case and therefore, there’s a resolution in each other. The only thing that goes over the course of the series is the romance and the personal journeys that each character has. This adds just that extra layer to these multidimensional characters.

I’d read almost all the Nora Roberts books over the last 15 years, but didn’t start the In Death books til last year – I consumed them, then got caught up … so now I have to wait for every new installment. I think I’ll probably start over from the beginning again next year. I love visiting with the core group of characters!

Yes! They are so amazing!!!! Rourke and Eve are definite one of my favourite couples of all time.

I adore this series ! Roark and Eve are my favorite book couple ever ! Cant wait to read this new adventure 🙂

Aren’t they fab? I can never get tired of these two <3