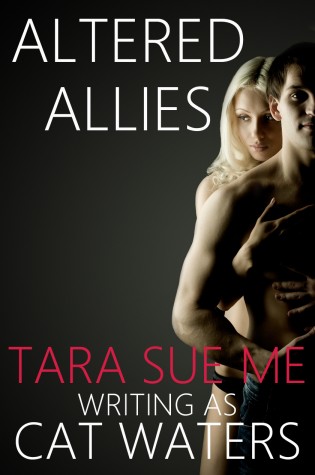 “This one left me drooling for more.”
~ Under the Covers

Tara Sue Me is writing under Cat Waters in this new short story, Altered Allies.  At around 40 pages long, it’s good to read as a taste of what she will be offering.  I devoured this in 30 minutes.  William Richardson is a wealthy IT geek looking for a live in nurse to care for his dying grandmother.  Emma Olson applies for the job after after her termination from a local hospital has her embroiled in legal troubles.  Her research shows that William has a poor track record with nurses…they only seem to be able to handle a few days before they bolt out the door.  She thinks she’s up for the challenge, but she has no idea what she’s getting in to.

Let’s just say that I believe this could have had the potential to be fleshed out into at least a novella length work.  There is instant attraction between these two, and William comes on strong.  Emma is the one who holds back and tries to keep things professional between them.  I found him really intriguing as the clean cut, but handsome geek who has a kinky side.  My favorite type of character.  In the end, the attraction proves too much and they give in.  It’s scorching hot with a bit of kink.  There’s great chemistry between the characters and the dialog is sexy.  This one left me drooling for more.  I want to see William and Emma again!

Thanks for the review, I like the geek aspect.

Hopefully she writes more about them

Thanks for review Jennifer