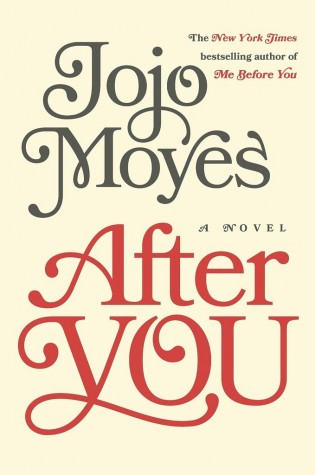 After You
by Jojo Moyes

“I will say that in a nutshell, though I enjoyed it, After You didn’t quite live up to my expectations.”
~ Under the Covers

I didn’t review Me Before You formally, but it was one of my top 2014 reads.  JoJo Moyes has a unique voice and while it was my first read of hers, I had pledged it wouldn’t be my last.  I will assume that if you’re reading this review of After You, you’ve read the first and are interested in the second.  I think I should preface this by saying that Me Before You was going to be a very hard act to follow.  It was beautifully realistic in its portrayal of Will and Louisa’s complicated relationship as paraplegic and caregiver.  I believe Moyes was beyond brave to turn that into a romance that didn’t end in an HEA.  I did believe, however, that it ended perfectly, or as perfectly open ended as I could have imagined it.  Hence my surprise when this sequel was announced.  Louisa seemed optimistic in her sorrow at the conclusion of the last installment, but when After You begins, we get the distinct sense that things didn’t work out as she had planned.  Louisa is living in London, working as an airport bartender, no further along in her academic or professional life.  She’s going through the motions while attending a support group for those grieving the loss of loved ones.  Suddenly, she has an unexpected accident that results in a chance meeting with handsome paramedic, Sam.  To further complicate things, someone from Will’s past shows up on her doorstep and turns her life upside down.

I will say that in a nutshell, though I enjoyed it, After You didn’t quite live up to my expectations.  Perhaps because I was fully satisfied with open ended-ness of Me Before You? I didn’t recognize Louisa in all her quirkiness that we saw before.  She was a shell of herself and I was struck as so disappointed that a character I had such high hopes for didn’t rise to the occasion and live out the dream that Will wanted for her.  I felt a bit cheated that I can never go back and read book one again and feel the sense of optimism I felt after reading the last line.  I don’t want to spoil the story by elaborating on the person that shows up from Will’s past, but it’s a SHOCKER.  Louisa is such a good person, so caring and giving, that she takes on the challenge almost as if it were meant to be.  Throw into this a love interest (Sam), who I really was rooting for, and you have a story full of angst.  There is also a bit of violence and exploitation of teens by some truly vile characters.  It’s balanced by some real, heartwarming moments where I can feel the tone of the first book shining through.  In the end, I was honestly disappointed by Louisa’s choice for the future.  I could not understand (based on the description offered), why the opportunity she takes was worth it.  It seemed too much of a sacrifice for not enough advancement.  You could argue that After You is just a more realistic look at what was likely to happen to Louisa after Me Before You.  I’m always up for a challenging read and can deal with the unexpected, but this was one story that I wish had ended in the place that I had hoped, rather than another open ended question mark that begs for another book to round out a trilogy.  That being said, I want to keep reading.   I will need to read book three if there is one, since I have to know where things end up, especially with Sam.  They both deserve their happily ever after.

Jojo Moyes is a British novelist.

Moyes studied at Royal Holloway, University of London. She won a bursary financed by The Independent newspaper to study journalism at City University and subsequently worked for The Independent for 10 years. In 2001 she became a full time novelist.

She is married to journalist Charles Arthur and has three children.

I may wait for book three before reading then… thanks

That is if she plans on doing a third. She may plan on leaving it open ended as it is.

I think I will pass on this one. I read Me Before You for a book club, but it isn’t something I would normally pick up. I am not a fan of open ended stories & HEA is a requirement for my romances. Thanks for the honest review!