To Read or Not to Read? Taboo Subjects in Romance – Rape Fantasy

With the release of Liliah Pace’s ASKING FOR IT, I really wanted to touch base on the sensitive topic of rape fantasy in romance books. For some, this can be a red hot fantasy and to others, this is the most terrible, horrendous and shameful thought that a woman could ever have. This great divide is the reason why this is such a hot button for so many people.

While it’s not a personal fantasy of mine, I am definitely not against reading about it in my books if that is what the heroine enjoys. I was on Twitter one day and someone had called Pace’s book “controversial” so of course that intrigued me and made me go check out what the book was about.

Graduate student Vivienne Charles has a deep desire for rough sex. Sex so rough that it borders on being taken by force. When she doesn’t find anyone who can fulfill those needs for her, she turns to Jonah Marks whose offer rings inside her head since the moment he uttered those words.

Pace’s book is not my first that I’ve read of this kind. Cara McKenna does a wicked version in her book WILLING VICTIM and it still remains as one of my favorites that do it right. I think McKenna captures just enough hesitation on Laurel’s part but also makes her desire stronger than that.

He grunted in time with his hard thrusts, his free hand running up and down Pam’s thigh. He brought it down on her ass with harsh slap and she cried out just as Laurel gasped.

…No one was really being violated, but she felt that same hot guilt she had her whole life, finding the visual powerful and horrifying but undeniably arousing.

Pace, on the other hand, has a heroine who has a past that makes this much more sensitive. I felt like in the first half of the book Vivienne didn’t really know what she wanted and she was less sure than Laurel. It isn’t until the second half of the book that I think it really begins to come together with her romance with Jonah. And as you can probably tell, Jonah is a man who definitely tells it straight.

With a boyfriend, you can pretend— but it’s a joke, really. A game. Not the fantasy you really want. Me? I’m nearly a stranger. I can do more than fuck you. I can scare you a little. Just a little. Enough to make it what you really want.

So while one worked better for me than the other, this is still something that isn’t heavily explored despite the fact that it can be a recurrent daydream for others. I’m curious to know what you guys think about this and learn whether or not you’re drawn to these type of stories. Where do you drawn the line when it comes to rough sex? 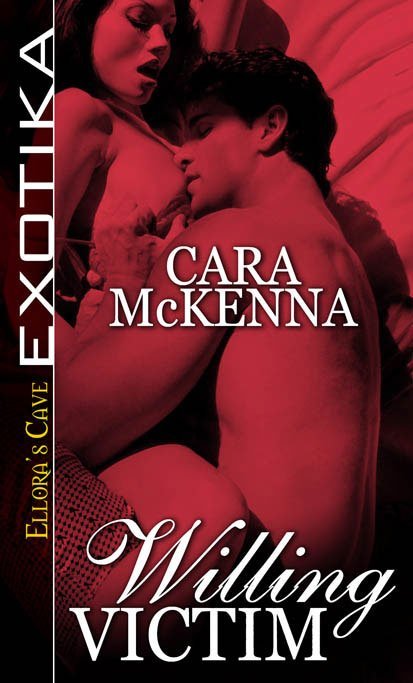 For the past couple years Laurel’s been coasting, hiding in the backseat while her life drifts off course. Then one summer afternoon a tall, built bruiser named Flynn strides in and steers her straight into an infatuation she never saw coming.

Flynn introduces Laurel to things she’s never imagined—to the violent but exciting realm of the underground boxing circuit, to rough sex and even rougher role-playing, and to an attraction she craves even as it intimidates her. As Flynn invites her deeper into his world and his life, Laurel has to make a choice—let fear keep her holed up where it’s safe, or take a chance and fight for the man who makes her feel more alive than she’d dreamed possible.

Reader Advisory: Although all sex acts are 100-percent consensual, Willing Victim contains role-playing scenarios that may upset some readers who are sensitive about rape, even in a simulated capacity.

Cara McKenna writes smart erotica—sexy stories with depth. A little dark, a little funny, always emotional. She also writes red-hot romance under the name Meg Maguire. Her wonderful publishers are Ellora's Cave, Harlequin Blaze, Loose-Id, Penguin / Intermix, Samhain, and Signet Eclipse. She loves writing sexy, character-driven stories about strong-willed men and women who keep each other on their toes, and bring one another to their knees.

“This is who I am. This is what I want. Now I need a man dangerous enough to give it to me.”

Graduate student Vivienne Charles is afraid of her own desires—ashamed to admit that she fantasizes about being taken by force, by a man who will claim her completely and without mercy. When the magnetic, mysterious Jonah Marks learns her secret, he makes an offer that stuns her: they will remain near-strangers to each other, and meet in secret so that he can fulfill her fantasy.

Their arrangement is twisted. The sex is incredible. And—despite their attempts to stay apart—soon their emotions are bound together as tightly as the rope around Vivienne’s wrists. But the secrets in their pasts threaten to turn their affair even darker…

Let’s hear your thoughts on reading about this subject!

I haven’t read either of these as yet but Asking For It is on my tbr pile and I’m gonna look into getting Willing Victim. I enjoy these types of stories and I’m definitely looking forward to reading both of these…thanks for sharing your thoughts Annie.

You really need to try them, Timitra!

This is a touchy subject for me…however, if an author writes it well enough I can read it…I have read scenes that caused me some struggle

Yes, I totally agree! You really need to strike the perfect balance otherwise it can end up one big mess.

I HATE the term rape fantasy. I don’t think it’s the right term at all. I don’t believe anyone really has a “rape” fantasy. I think they have a rough sex fantasy or a fantasy of being completely taken over by sex. Or even a fantasy of having sex with a stranger that is rough.

They whole “head down, ass up” take what I give can be very hot if written well but when the term rape enters into it, it’s just not sexy anymore IMO.

Rape is against your will. If it’s a fantasy then it’s totally your will.

You bring up some very good points, Jennifer. I have to agree. The term is enough to deter a whole lot of people from reading it. I wonder if it was called something different if more people would be more willing to read or not

I agree with what Jennifer said about not liking the term rape fantasy, I’ve read both Willing Victim and Asking for It and I didn’t feel that either of the women in those stories were fantasising about being raped. They were into rough sex, they wanted it to be raw and feeling a little scared turned them on even more but really they wanted the guy to take control and give it to them hard. I definitely don’t have a rape fantasy but I could sure as hell get on board with a night of hot sex with a domineering… Read more »

For me, it’s really the heroine who make or break these books when dealing with this subject matter. I think once the heroine is unsure about ANYTHING at all, it pulls me out of the experience because you have to be damn sure about what you want and communicate that effectively to do something like this. The hero, is a bit easier.