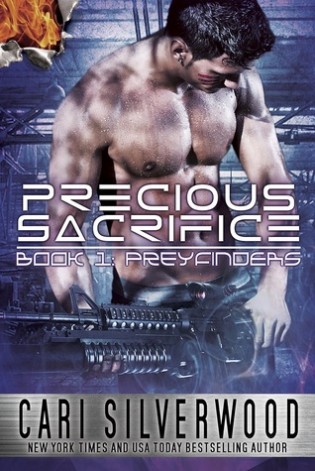 “Cari Silverwood can indeed write in any genre and make it ride well worth the time. ” ~ Under the Covers

As you might be able to tell from my reviews, I LOVE Cari Silverwood’s dark BDSM-themed stories.  Her Pierced Hearts series is a desert island keeper for me.  I’ll admit I’ve not been a huge consumer of sci-fi in my lifetime, despite being a bit of a nerd.  There was that time I read L. Ron Hubbard’s Mission Earth series in high school due to encouragement from an ex-boyfriend.  It even had a soundtrack.  There ends my sci-fi reading experience. To say I was unsure I could get into alien sex is an understatement.   But she’s proven to me with Precious Sacrifice that she can make any genre unbearably hot, even sci-fi!  Jadd is an Igrakk Warrior, a sexy, humanoid alien fighter for his kind.  In their race to conquer worlds, Jadd injures one of his fellow warriors.  He’s lucky his life isn’t forfeit.  Instead, he is demoted to Preyfinder and given the task of testing out a “pet”-making drug on a human female Prey who is fated to die at the hands of a serial killer.  This drug will create strong bonds of Master and slave, painful to sever for either party, but Jadd’s punishment is in knowing that he must leave her fate in the end to the killer, despite the bond they have formed.

As a novella length introduction to the Preyfinder series, Precious Sacrifice hit all the right notes for me.  There is some brief world building to set up the background, but not enough to drown the story out or confuse me as a reader.  Jadd is anything but warm and fuzzy.  He approaches his prey Brittany with a matter of fact focus on his goal: to make her his sexual slave through the introduction of a series of drugs.  Some of the fish out of water dialog between these two made me giggle.  Jadd is trying to blend in as best he can, but he slips up sometimes and Brittany is brighter than she’s given credit for.  She knows something fishy is going on since she feels like a cat I heat and something about Jadd just doesn’t seem human.  Jadd isn’t prepared for how protective he becomes, and I loved seeing his inner turmoil and realization that he wants Brittany as his pet forever.  I also appreciated that Brittany doesn’t become a zombie-like robotic follower of Jadd’s sexual pull.  She has a choice and though she’s influenced, her free will isn’t removed entirely.  The sex is hot and rough, with a D/s edge.  I always find Cari’s scenes unique and captivating and this was no exception.  I wanted this to be a full length novel, as I think I could read about Jadd and Brittany’s exploration of their new relationship forever.  I hope we see them again in the next two installments in the series.  Cari Silverwood can indeed write in any genre and make it ride well worth the time.

Just got this….not sure how I’ll feel about the drug as that was an issue for other reviewers but I’ll try it

These books ( there are 3 in the series) all feature dubious consent , Elizabeth. The drug (nanochem) also ends up affecting the men in ways they didn’t expect it to, which made it more fun to write.
Thanks for the great review, Jennifer.

This first book is now free at all retailers.