Opening Up
by Lauren Dane

“One thing is for certain, you need to pick up this series because it’s full of soul and heart just as much as heat.  Great scorching series starter, Ms. Dane!  I’m hooked!” ~ Under the Covers

I haven’t been this excited about a new Lauren Dane book in a while, and this just makes me happy.  OPENING UP is the beginning of a new series with Dane’s brand of friendship that introduces you to a whole set of characters that work so well together and that you can’t help but get immediately invested in.

We kick things off in the Ink and Chrome series with PJ, a girl in her twenties that comes from a family that has long been one of the leaders in the tire industry in her town.  She’s always wanted to find her own place in the workplace as well as in her family, but sadly hasn’t had much luck with that.  Her passion to expand the family business into custom paint isn’t well received by her family, just as her purple hair isn’t.

I loved so many things about her!  She’s got a tough skin from dealing with her father and uncle, who are major asses.  She goes after what she loves and wants, whether it’s her business or her love interest.  She’s independent, determined, and has a great head on her shoulders at her age.  Without needing to be angsty or overtly dramatic like we often see with heroines dealing with as much as she is.  She’s just mature, comfortable in her own skin and totally kicks ass!

Which worked great with the fact she ends up with an older hero.  Asa Barrons owns a custom motorcycle shop and ends up giving PJ custom paint jobs.  His attraction to the young spit fire is instant, but he knows his passions run on the kinky side and she’s way too young for it to appropriate.  But let me clarify, we are talking he’s in his late thirties so the age difference is not as big as I originally thought.  I absolutely loved him.  He’s a little rough around the edges, ex military, totally alpha.  Knows what he wants and doesn’t feel too bad about showing it and taking it.  And did I mention there’s tats and piercings galore? Yum!

As I said, instant attraction burns into explosive chemistry.  Asa and PJ are so perfect together in and out of the bedroom.  And their bedroom kinks?  Well, you won’t be disappointed.  I know some people may complain at times about the talk during sex scenes, but I found them so endearing that they would be comfortable enough to crack a joke or just be normal, even when they were getting their sexy on.

This is also the first audiobook I listen to narrated by Sasha Dunbrooke and I was impressed by how much I enjoyed her narration.  Will look forward to listening to more from her!

One thing is for certain, you need to pick up this series because it’s full of soul and heart just as much as heat.  Great scorching series starter, Ms. Dane!  I’m hooked! 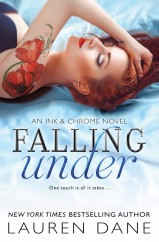 PJ turned in a slow circle as she stood in the middle of their showroom. Just to her left, a 1970 Chevelle. Candy-​apple red.

Big windows fronted the space, but they managed to still give it a sort of intentionally gritty feel inside with black leather couches placed in a way to look at the cars and bikes on display like art.

She loved it so very much. Bold and clever. It took itself very seriously when it came to the product but also had a little bit of tongue-in-cheek self-​deprecation. Delicious design choices all over the place, including a custom Harley Softail in black matte that gave her a little shiver.

She’d thought it impossible for Asa to be any hotter, until she saw this place.

“If you’re done getting all wet over cars can we get your makeup done?” Audra called out.

“Do you see this?” PJ pointed at the Softail’s back tire. “It’s so fat and delicious. I might actually be maybe a little wet, yes. But I’m just telling you that because we’re so close.”

PJ plopped down in front of a makeshift makeup station mirror.

“Go look at your outfits with Stella so she can get you styled for each.” Audra had taken on the task of organizing the shoot. She pointed at a rolling rack of clothes that had PJ’s name on it.

“I see a theme here.” Stella, who was acting as their makeup person for the day, took in each outfit.

Tom bounded into their space, amped up on coffee. “What? She’s like a ridiculously sexed-up girl next door. Guys love that. We all know it. So work it and sell my decks!”

“You can’t be here now. I have it handled.” Audra shoved him out and closed the door to the small conference room where they’d set up.

“The cutest hamster ever, though. Here.” Audra shoved an outfit PJ’s way.

The first dress turned out to be a pale blue-​and-​white gingham.

She wore it with red glitter pumps, and Stella teased PJ’s hair up in the back and curled her bangs before dividing at the nape of her neck into two braids.

Thick liner, red lips, and a beauty mark and she found herself shoved back out.

“PJ, come over and meet Frank, he’s the photographer.” Tom introduced them. “We’re set up in the shop so come on with me.”

She tried not to trip and fall as she kept stopping to gape at things. Where the showroom had been all about the art of the completed project—a perfect experience for a potential client—the shop, with its bays and workstations, was clearly the heart of the operation.

High windows sent shafts of light down onto the shop floor and to the offices that ringed it. It was orderly and tidy without being compulsively so.

She skidded to a halt when she saw the car she’d be posing with.

“Sweet mother of Bob Dylan,” she breathed out at the sight of the deep blue 1950 Cadillac roadster convertible before her.

“I take it that means you approve?” Frank asked her.

“I might need some alone time with this car later.”

She turned to catch sight of Asa walking over. Walking! Ha. Prowling was a far better word. The air seemed to hum around him, and she found it a little harder to breathe. Especially when he came to a halt just inches from where she stood.

“This is yours?” She might have an orgasm just looking at the car. And now she knew it was his.

He nodded, the corner of his mouth hitching up slightly.

“Morning, Asa. I’m going to have a moment with your car, but I won’t do anything she doesn’t want.”

Man, was she in over her head. Just flirting with him was taking all her effort. What would he be like in bed? What would he kiss like?

The smile on his mouth made her tingly.

“I might try that one. Just the tip has mixed results.”

Oh, well. That one made her a little dizzy. And by the look he wore, he knew the effect he was having.

“Mixed results. You strike me as an overachiever.” PJ lowered her lashes a little as she took in the heft of all that steel. Of course he had a Caddy. Big, strong, bold. Totally in charge.  Just like him.

PJ rather felt as if she was having an out-of-body experience. There was no other explanation for the words she’d just spoken. Out loud.

Asa opened his mouth and everything inside her seemed to still, just waiting to hear what he’d say.

And then Tom called out to get to work and they reluctantly parted.

Lauren Dane has been writing stories since she was able to use a pencil, and before that she used to tell them to people. Of course, she still talks nonstop, and through wonderful fate and good fortune, she’s now able to share what she writes with others. It’s a wonderful life!

The basics: Lauren is a mom, a partner, a best friend and a daughter. Living in the rainy but beautiful Pacific Northwest, she spends her late evenings writing like a fiend when she finally wrestles all of her kids to bed.

I’ve liked everything I’ve read by her that was contemporary romance (especially the Brown family books) so I’m looking forward to this series.

I’m so excited to begin a new series by Lauren Dane! Thanks for the giveaway

this looks and sounds awesome!!! Been reading such positive reviews for it! Definitely on the top of my wantlist 🙂

Thanks for the review and giveaway.

OMG! I love how PJ reacted to those vehicles. What a scream. The 1970 Chevelle does it for me…in blue. Can’t wait to read this.

I love the sound of this book. Definitely on my must read list.

I am going to enjoy reading the new series. I would love to have the car PJ is looking at. A 1970 Chevelle candy-apple red. Boy does that bring back memories..

I so love the rough around the edges heroes!! They are just the best right? Great review. This is a new to me author, so I am going to add this to my list.

What a hott excerpt!

[…] ARC Review + Giveaway: OPENING UP by Lauren Dane (Multiple chances to enter to win OPENING UP) […]

I have loved everything Lauren Dane has written. I’m glad to see this got you excited about her books again – I can’t wait to read this!

I can’t wait to read this book and series.