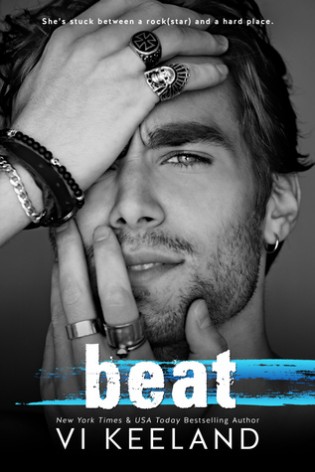 “I loved the behind the scenes rock star vibe this book gives us.”
~ Under the Covers

This is my second read by Vi Keeland and I have to admit I really enjoy her writing style.  The first book in this series caught me with its unique storyline and great chemistry.  I got a bit more of that in BEAT, but although I still enjoyed the book, I had some issues with the story.

We meet our hero Flynn Beckham in book 1 while he’s playing most eligible bachelor in a reality TV dating show.  In the end, he doesn’t get the girl.  But his sweet attitude made me swoon and only want to see him get an HEA.  In BEAT again he falls hard and fast, almost at first sight, with the heroine, Lucky.  Flynn is in an up and coming band and they’ve just gotten a gig to open for a hugely successful band.  He’s at Lucky’s bar to meet with the lead singer of that band when he gets stood up and quickly develops a connection with Lucky.  But as luck will have it, she’s that lead singer’s girlfriend, and going on tour with them wanting to take Lucky away from him only complicates things.

I loved the behind the scenes rock star vibe this book gives us.  And I was extremely happy to see Flynn keeps a level head.  He’s not into the “sex, drugs and rock and roll” mantra, he’s smart, he’s focused, he’s talented.  He’s just an all around good guy, extremely sweet, dedicated to his family (especially his niece!).  Flynn is the type of hero I really love to swoon over.  He has the appearance of a bad boy on the outside, with his long hair, tattoos, rings, leather bracelets.  But that’s all superficial.  He’s a big marshmallow, and one to be treasured.  You’re definitely going to want to keep him as your book boyfriend because he’s that perfect.

The heroine, on the other hand, is where I had some issues with.  She has issues from her past she’s trying to deal with.  She has stage fright, even though she’s a wonderful singer and comes from a music royalty family.  She’s dating her childhood celebrity crush, even though she’s not sure he’s exactly what she wants for herself or if she’s just following in her childhood dreams.  And she’s slowly making progress at changing things and moving on in the right path in her life.  For all I saw, though she’s very likeable, I found her a bit weak when her problems weren’t monumental.

When things heat up between her and Flynn, she’s strong enough to cheat on her boyfriend, but not strong enough to make the decision that what she really wants is Flynn.  I guess when it comes to cheating, I feel like this wasn’t a situation where the pull was so strong that I felt it necessary to cheat instead of ending the relationship and found something else to create tension between the new couple.  Thank God it doesn’t drag on for as long as it could’ve!

I’m excited to see where this series goes next, I have my sights set on a story for Lucky’s best friend because she’s such a spit fire I know she’ll make for a fun read!

PS: On a side note…. HOLY HELL the covers for this series are awesome!

Getting through Flynn singing is incredibly hard.  The way his throat moves, the way his mouth caresses each syllable of the low, raspy sound that falls from his lips.  I should be watching his posture, his breathing, the way his larynx forces out the words—but instead I’m focused on the beauty of his mouth and how the sound of his voice glides over my body, making it feel both warm and tingly at the same time.  I’m lost when the song finishes, yet I haven’t really observed him yet.

<i>Ummm…absolutely nothing from what I can see.  Everything was perfect.  Don’t change a thing.</i>  Shit.  “Could you do it again?  Maybe a different song, one you haven’t sung in a while.  So the sounds are less familiar to your body.  Sometimes that can give me a different view.”  At least I make it sound like a real thing when the words come out.

He sings again, and this time I force myself to observe.  “Hmm…your posture is great.  Most people have a tendency to favor one side of their neck, which makes them tilt a bit when they speak, and it becomes magnified when they sing, which puts strain on the muscles around the vocal cords.  Your alignment is perfect.”

“Thank you, it goes with the rest of my perfectness,” he says with a teasing arrogance that, from the little I know about him, I know isn’t real.

“You didn’t let me finish.”

“You can’t now tell me I’m not perfect.  I was already basking in the glow.”

“Actually, it was perfect…but almost a little too perfect.  Which makes me think you don’t usually stand this way when you sing.”

“It isn’t the way I normally sing.  On stage, I usually have a guitar over my shoulder.  Even if I’m not playing it, it’s there.”

“Well, I need to see you holding your instrument to assess you fully, then.”

Flynn’s eyebrows quirk up and the dirty grin on his face is unmistakable.

“That’s a shame.”  He shrugs, the playful smile still on his face.  “But okay.  It’s your call.  Whatever instrument you want to see me hold is fine with me.”

“So now we’re talking about the other instrument again?”

I roll my eyes, although this conversation is having more of an effect on me than I let on.

I love your reviews. Thank so much for sharing.
PS: I love these covers, too. Who’d have thought something so simple could be so VERY HOT!!!
A++ to whoever had the idea.

Under the Covers Book Blog
Admin
Reply to  Jennifer Schaber