Beneath This Mask
by Meghan March

“Beneath this Mask charmed me from the start and kept me invested and intrigued until the end.” ~ Under the Covers

Beneath This Mask, book 1 in the Beneath series, marks my first read by author Meghan March and a new adult book to boot. I am usually not a fan of NA, yet I really enjoyed this read. I may now be a fan of NA as long as it is written by Meghan March, something I never thought possible after many failed attempts with the sub-genre. Beneath this Mask charmed me from the start and kept me invested and intrigued until the end. Charlotte aka Charlie is the 23 year old once pampered daughter of a man who stole billions from many and the subject of speculation as to her involvement/knowledge in her father’s activities. Simon is a 31 year old navy veteran son of a retired congressman who is expected to follow in the footsteps of his father.

Charlotte flees from New York, the black cloud shrouding her through her father’s sins, and the limelight, to start a new life in New Orleans. Simon meets Charlie at a tattoo parlor a year later where she works and is persistent in his desire to make her his, and not just for a night.  The chemistry between them is spot on and becomes too much for even Charlie who is determined to hide beneath the mask she has created for herself to keep Simon at arm’s length for long.

Between hiding her true identity,  protecting her heart and Simon’s as she believes they can never have a future, and lastly her ongoing hidden attempts to solve the mystery of where the billions her father stole are in order to clear her name once and for all, she has her hands full.  Simon has the perfect combination of alpha male, southern gentleman, possessiveness, protectiveness, dominance, and sexy going on to make him a 100 percent satisfying hero.  Simon suffers from PTSD and finally decides to seek help; he is motivated to do this so he can be whole for Charlie and shares this with her. His vulnerability is endearing and warms the heart.

The level of maturity, genuineness, and honesty within these characters allowed me to truly enjoy this read and make them relatable. The story line basics may not be completely unique but the way it was written allowed me to enjoy it like it was the first time. I will not get into all the other characters in this story as it is something you should discover on your own, but March’s writing even had me falling in love with Huck, Charlie’s dog!

I am so ecstatic I have Beneath This Ink loaded and ready to go, I just know I will love me some bad boy Constantine and I think you will too…. 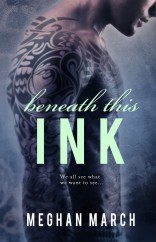 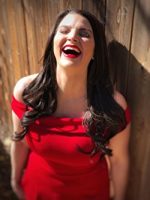 A New York Times, Wall Street Journal, and USA Today bestselling author of more than twenty titles, Meghan March has been known to wear camo face paint and tromp around in woods wearing mud-covered boots, all while sporting a perfect manicure. She’s also impulsive, easily entertained, and absolutely unapologetic about the fact that she loves to read and write smut. Her past lives include slinging auto parts, selling lingerie, making custom jewelry, and practicing corporate law. Writing books about dirty talking alpha males and the strong, sassy women who bring them to their knees is by far the most fabulous job she’s ever had. She loves hearing from her readers at meghanmarchbooks@gmail.com.

Great review. I read this book before going to a signing that Meghan March was attending, and Huck was my favorite character of the story. I am looking forward to reading the 2nd book.

I’ve had this book on my TBR pile for a while and I’m moving it up, thanks for your review.

This is a new to me author/series. After reading your review I added this series to my Goodreads & Amazon wishlist. I am purchasing this series on my next ebook shopping spree.