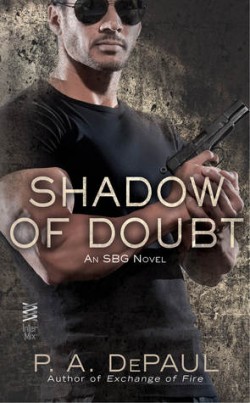 Shadow of Doubt
by P.A. Depaul

“SBG is turning out to be a good series to follow. I thoroughly enjoyed the first installment, Exchange of Fire, and I found Shadow of Doubt even more enjoyable.” ~ Under the Covers

Hero worship or rescue complex? Oh no, their relationship so much more than that. Cappy and Michelle had an instant connection from the first time they met. It wasn’t the best of circumstance, but it was obvious that the connection was strong. To prove, even after six years had passed, their feelings are still there. It was palpable, mutual and cannot be denied.

After Captain Jeremy Malone aka Cappy and his team rescued Michelle Alger from a Cartels, they had gone their separate ways trying to survive the tragedy they experienced. But not a day passed that they didn’t think of the other. Their paths will cross again when Michelle is caught up in the murder of the Senator’s son. As fate would have it, Cappy leads the Delta Squad, who will help the Senator find the murderer and help find her freedom and maybe love. Unfortunately, so much has happened, so much is at stake, and there’s so much more they will need to deal with before they can ever be together.

SBG is turning out to be a good series to follow. I thoroughly enjoyed the first installment, Exchange of Fire, and I found Shadow of Doubt even more enjoyable. It was a good blend of suspense, action, and romance. The twists and turns of the story kept me intrigued and reading on. I enjoyed Cappy and Michelle’s story; they’re sexual tension was off the hook. I also loved the camaraderie, banters and the fights this group has. But what I love most about this book is the secondary character build up which lacked from the previous installment. I feel like I got a good view of who the members of the team are, and it made me want to read more about them. Which brings me to the point of who the next book will be about. Looks like Romeo and Magician will be a couple. From what I can see there will be some angst and a lot of hurt in that story. But I’m hoping it will be Talon’s story. He’s been hurt bad, and he deserves his HEA. That’s definitely an anticipated read for me and I cannot wait! 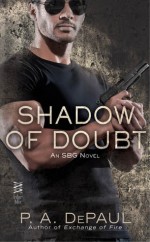 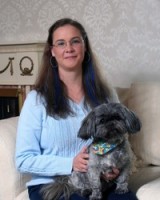 P.A. DePaul is a multi-genre romance author including paranormal fantasy and romantic suspense. She originally hails from Carroll County and Baltimore County, Maryland, but also lived in Macon and Warner Robins, Georgia. She currently resides in a beautiful community just outside Philadelphia. Shadow of Doubt, is the second novel in the SBG series. You can find the first: Exchange of Fire, at all major E-Retailers.

Thank you so much for this awesome review! I’m so glad you really enjoyed this book and getting to know Delta Squad on a deeper level! I definitely have a ball writing about these men and women! 😀

Thanks for passing by PA DePaul!!!

I haven’t read a good romantic suspense in a while .. thanks for the review