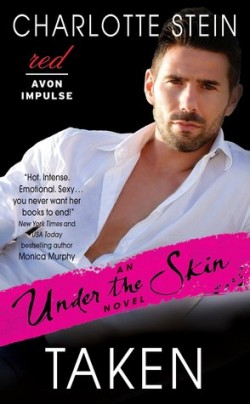 “Since the book is just under a 100 pages, it’s one that I think will be good as a refresher. It’s different, silly but still very sexy. Stein writes some intriguing heroes that are worth reading about and TAKEN works well as a standalone too.” ~ Under the Covers

Charlotte Stein has such a unique voice. In the Under the Skin series alone, she takes on darker tones effortlessly but she also does the angst quite well too. In TAKEN, she takes on another route and makes this one a little silly and awkward.

The heroine, Rosie and her friend have been annoying the crap out of this rare-book store owner, even going as far as vandalizing his store when Johann catches Rosie and drags her to the basement and chains her to his bed. It sounds a little bit silly but to be honest, Stein makes it that way. She refers to the hero as a werewolf which is hilarious because he is big and hairy and more than a little awkward. When he panics and realizes what he has done to Rosie, he tries to uncuff her and this starts a little tirade between the two. They speak about totally random things, things that normally make me roll my eyes and ask what is the point of all this, but Stein somehow makes it all work and the awakwardness between the two soon turns into something a whole lot like sexual tension. It’s brilliant actually what Stein is able to do here. I don’t think anyone else could have pulled it off as effortlessly as Stein can.

Since the book is just under a 100 pages, it’s one that I think will be good as a refresher. It’s different, silly but still very sexy. Stein writes some intriguing heroes that are worth reading about and TAKEN works well as a standalone too. 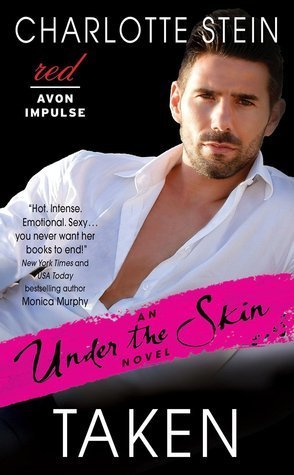 “What are you doing?” I hiss, because seriously this was not what we discussed. She just said she was going to come in here and do a bit of mischief, not burn the goddamn place down. I thought she meant creasing the corner on page seven of War and Peace, and to be honest even that was too far for me. The books in here are absolutely gorgeous. The owner might be a maniac. It all seemed like the very worst thing in the world.

And then she starts in on actual arson.

“I told you: teaching him a lesson,” she says, and I can see it in her hand.

A can of lighter fluid, that she’s getting ready to spray.

“This is not a lesson Marnie. This is suicide.”

“The door is past where he is right now.”

“I don’t think he’s slow Marnie,” I say, but even I have no real idea how right I am about that. I picture him lumbering after us as we dash down the street. I think of him sort of catching me as I round the shoe place on the corner. I do not expect him to be so quick that he comes up on us before we even know he has moved. That is not just fast. That is pretty much super human and insanely stealthy. For a second I think something mad like did he take off his shoes to do it?

And then all my thoughts are cut off at the knees.

They have to be, because oh my god he just grabbed me. I swear to god he grabs me. His enormous arms go right around my middle, and not in a simple and straightforward restraining sort of way. He actually lifts me clean off the ground. I see both of my feet kick up in an arc, those cute purple Converse suddenly so small and silly seeming. I should have chosen something more adult, I know, and now I am going to be murdered while wearing them. “

Thanks for letting me know that it works as a standalone…

Yes, it works as standalone.