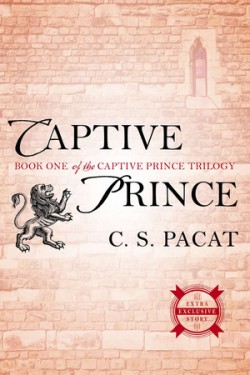 “Rich descriptions bring this world to life and page by page, Pacat makes a fictional fantasy world feel real for readers. If you’re not reading for its characters, then read it for its worldbuilding. This is truly an extraordinary book! ~ Under the Covers” ~ Under the Covers

Pacat takes something that I love – M/M Romance and puts her spin on it so that it becomes this living, breathing thing. The first thing you notice when you start reading Volume One is the rich details. Pacat does not skim anything. A story that is not for the faint of heart, CAPTIVE PRINCE takes on the notion of slavery and puts it front and center. Let me warn you now, it’s graphic and sometimes unpleasant, but nevertheless you become so attuned to Damen’s character that you cannot bare to look away.

Damen is a warrior of his own kind. As the rightful heir to his kingdom, he has been stripped of his identity when his half brother gains control and is sent to their enemies’ territory to become his slave. A chilling thought, that but once again, the writing hook you in. I also think the big reason why readers become so entranced by this book is because it’s told through the eyes of Damen. We see some vulnerability, yet Damen never really backs down through it all. Strength and power are all relative when it comes to this fantasy world. I think if this story were told from a different perspective, it wouldn’t hold the same appeal and it definitely wouldn’t be so entertaining.

Prince Laurent is desperate to break Damen. Seeking revenge for his brother’s death, Laurent doesn’t simply want an eye for an eye. He wants Damen to suffer. Now I know you’re wondering if there could be a HEA. That has yet to be determined in this volume. But I can tell you that there are traces of a romance blooming. It’s not clear at first. In fact, you may think the opposite when they first meet, but Pacat lays details that are there if you look closely enough. For this alone, I’m willing to read on to find out.

It’s been awhile since I’ve read a good fantasy book and this is what it is. Pacat weaves an intricate world filled with politics and unknown lands yet to be discovered. Rich descriptions bring this world to life and page by page, Pacat makes a fictional fantasy world feel real for readers. If you’re not reading for its characters, then read it for its worldbuilding. This is truly an extraordinary book!

“A golden prince was easy to love if you did not have to watch him picking wings off flies.” 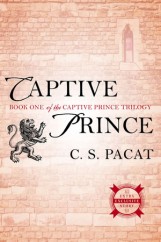 I just read this a few days ago and it still is swirling in my mind. I can’t wait to find out what happens next for Damen and Laurent.

It’s going to interesting for sure!! I can’t wait!

I read books 1 and 2 last year, and really enjoyed it. A lot of m/m books completely fail on the plot, but this one was dark, fantastical and well-written.

I agree on the writing and the dark elements of the book. I cannot wait to see what the author has planned next!

I had my library get this book after a lot of people I followed on Twitter raved about it but I haven’t read it yet.

This book was incredible, my review can be found on my blog, http://fortheloveofbooksreviews.blogspot.ca