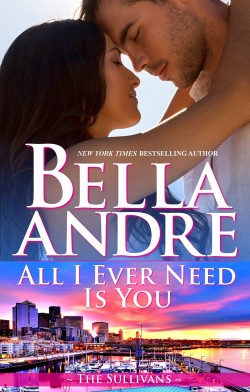 All I Ever Need Is You
by Bella Andre

“Andre does such a great job of giving each character their own personality and epic love story, but also manages to maintain the lovely familial aspects of the series that make this series a must-read!~ Under the Covers

WARNING: This review will probably list all the things I love about Adam Sullivan. So be prepared…

Adam Sullivan is an accomplished Seattle architect. As the last of the Seattle Sullivans to not fall prey to love yet, he is also the most determined to stay single. However when he meets his brother’s wedding planner, Kerry Dromoland Adam throws his plans of bachelorhood out of window and jumps straight into bed with Kerry.

As someone who believes in the idea of forever and true love, Kerry is the last person someone like Adam should get involved with. However it is IMPOSSIBLE not to fall for someone like Adam. I say this all the time with Bella Andre books but I will risk sounding like a broken record because it’s the truth – she writes some of the best Contemporary heroes you will find. There’s something so very dreamy about each of them, but Adam has this bad boy thing going on that makes him utterly irresistible.

First of all, he’s persistent and determined and even though Kerry declines him the first time they meet each other, he’s right there the next morning, charming her with his gifts and the way he listens. Where can I find a man like him? He’s also very considerate as well, never judging when Kerry runs off in the middle of the night to take care of her drunk sister who gets herself into trouble a lot. Furthermore, there’s this one scene that in the scale of the entire book probably doesn’t mean a lot but it was a scene that resonated with me because it was so simple yet so effective in showing how Adam respects Kerry.

In the scene, Kerry is working at a wedding, doing her thing until she bumps into Adam. Neither of them knew that they would be seeing each other but before they can really get into a conversation, Kerry is pulled away by work, answering all the calls for help while Adam awkwardly stands there waiting for her to finish. So absorbed in her work, Kerry forgets Adam is there and she apologizes for being so rude and all Adam says is a simple, “No need to apologize for doing your job.” I don’t know why but when I read those words on my Kindle, I just took a moment to pause and say, wow. What a fabulous guy. It proves that he is comfortable standing by her while she does what she needs to do and also that he respects and understands how important her job is to her. To me that is more romantic than flowers, midnight excursions or even smoking hot sex (which by the way, this book has by the bucketload!). And it once again proves why Bella Andre is an excellent storyteller because she writes those intimate, romantic scenes that show their love.

Bella has announced that the series will continue with the New York Sullivans. I mean, there is literally nothing I can complain about because I feel like I can read this series forever. Andre does such a great job of giving each character their own personality and epic love story, but also manages to maintain the lovely familial aspects of the series that make this series a must-read!

Thanks for the review, I haven’t started this series yet.