We’ve asked author Avery Flynn what book kept her up all night reading under the covers lately, and here’s what she had to say!

How many times, at the end of a chapter, have I looked over at the clock, seen 3 a.m., and told myself just a few more pages. Too many to count. Considering the blog you’re visiting, I’m going to guess I’m in good company with that confession. 🙂

It took me a while to narrow own those up-all-night books to one, but I finally did it. My choice? Fatal Shadows by Josh Lanyon. It’s a little piece of romance noir candy that sucked me right in and had me buying the entire series en mass as soon as I finished Fatal Shadows. What’s it about? So glad you asked. It’s a fabulous M/M story with characters that you’ll just fall in love with. Here’s the blurb.

One sunny morning Los Angeles bookseller and aspiring mystery author Adrien English opens his front door to murder. His old high school buddy (and employee) has been found stabbed to death in a back alley following a loud and very public argument with Adrien the previous evening.

Naturally the cops want to ask Adrien a few questions; they are none too impressed with his answers, and when a few hours later someone breaks into Adrien’s shop and ransacks it, the law is inclined to think Adrien is trying to divert suspicion from himself.

Trust me on this: IT’S AWESOME! Yep, it totally deserves all caps. 🙂

Panty dropper, knee knocker and all-around-good time Cam Hardy leaves a trail of broken hearts wherever he goes. His lady killer reputation never bothered the private investigator until he met Drea Sanford. Getting the tough as nails make up artist in his bed proved to be the easy part. It’s keeping her there that’s harder than any of the special ops missions he’s run in South America.

Falling into Harbor City’s modern day Casanova’s bed was never on Drea’s list of smart things to do—but hotness happens, especially in the form of the six-foot-five-inch motorcycle riding Cam. Then he takes their secret affair public and she swears to never let him crinkle her sheets again. But when one of Drea’s clients is murdered and the police zero in on her, the only person she can count on is the one man she never thought she could trust.

Drea got out of the seat and turned around to face him, but she was lost for words when she realized standing up had just given him a better view. Cam’s green-eyed gaze took in her entire body. Then he grinned, pissing her off and drenching her panties at the same damn time.

If anyone could carry off absolutely wicked and totally charismatic at the same time, it was Cam. She itched to run her fingers through his thick mass of tousled honey blond hair. His murky green eyes were full of dark promise, the kind she knew he could deliver.

And then there was his body. She could eat Jell-O off of his tanned washboard abs and the gelatin wouldn’t have the courage to jiggle. Being near him was like standing at the edge of the subway platform as the train whooshed by—exhilarating, dangerous, and addicting on a completely visceral level.

But he’d broken her rule. The one thing she’d asked him not to do—and he’d gone and done it anyway. She wasn’t sure whether knowing he’d done it without thinking made the situation worse or just sad. But she couldn’t keep seeing him if she couldn’t trust him to keep this a secret. Hell, after that kiss, there was no secret. Cover blown. Everyone knew.

Time to cut her losses. Breaking it off now was the smart plan.

“I know what it is.” He stood up and closed the distance between them. “You’re embarrassed because you think someone saw your tongue push its way into my mouth—accidentally, I’m sure. And heard that sweet, soft moan of pleasure—”

She pushed her hand against his chest and forced him back. “Get over yourself, pretty boy.”

He didn’t even blink at the insult. “You want me. I want you. The sex is amazing. Why are you fighting so damn hard against letting people know we’re together?”

“Because we’re not.” She had no plans to trod down the well-worn path to Cam Hardy’s bed again. “You knew the rules when this thing started.”

“No going public.” His gaze pinned her to the spot, and he looked at her like she was the only woman in the world. “Look, babe, give me another chance.”

It made her mouth go dry and other places get wet. They’d had one hell of a wham-bam-thank-you-ma’am twisting of the sheets, but they’d known from the start this was temporary. She’d known it. He’d known it. They’d agreed to keep it secret.

“It’s over.” Drea took a single step away from him.

He moved lightning fast to get in front of her, his bulk blocking her view of the rest of the group. “Don’t go away mad, babe. Let me make it up to you. Tonight. My place. No one has to know.”

She tossed her cup and plate into the trashcan. “Charming.”

He threw up his hands in frustration. “Around most people, I am.”

“And I’m not most people.” Pushing her point home, she traced a finger across his broad, sinewy shoulders and used the softest hint of pressure to nudge him out of her way so she could march across the grass to say goodbye to her best friends. “You should remember that.”

“As if I could ever forget.” 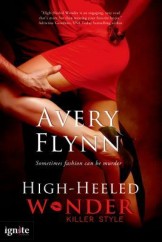 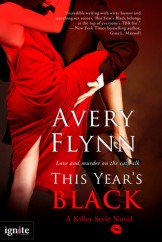 Smartass. Chocaholic. Writer of romance with smartass alpha heroes who are as good with a quip as they are with their *ahem* other God-given talents.
Biography
Avery Flynn has three slightly-wild children, loves a hockey-addicted husband and is desperately hoping someone invents the coffee IV drip.

She fell in love with romance while reading Johanna Lindsey’s Mallory books. It wasn’t long before Avery had read through all the romance offerings at her local library. Needing a romance fix, she turned to Harlequin’s four books a month home delivery service to ease the withdrawal symptoms. That worked for a short time, but it wasn’t long before the local book stores’ staffs knew her by name.

Avery was a reader before she was a writer and hopes to always be both. She loves to write about smartass alpha heroes who are as good with a quip as they are with their *ahem* other God-given talents. Her heroines are feisty, fierce and fantastic. Brainy and brave, these ladies know how to stand on their own two feet and knock the bad guys off theirs.

Join her street team, The Flynnbots, and receive special sneak peeks, prizes and early access to her latest releases!

Also, if you figure out how to send Oreos through the Internet, she’ll be your best friend for life.

Note from Avery on Prize Pack:

When you’re a makeup artist, you have to look good–even when you’re on the run from the cops and a crime boss. Of course, it doesn’t hurt that the person standing between you and the bad guys is a sexy, motorcycle-riding former special ops hottie who just happens to be your ex-lover. Yeah, those kind of days require Sexy Mother Pucker lipstick, Most Wanted eyeliner, Making Headlines nail polish, Gun Ammo eye shadow and Sweet Verbena scents. Lucky you, you don’t have to be on the run like Drea and Cam in Make Me Up to get all of these goodies. Just enter the giveaway for your chance to win the Make Me Up Makeover Basket from author Avery Flynn & Entangled Publishing!

Hmmm thanks for the recommendation