Join our newsletter to be the first to hear our latest news! Learn More
Home / Reviews / ARC Review: The Virgin by Tiffany Reisz

THE VIRGIN is the seventh book of the Original Sinners series and is book three in the prequel White Years. Again, Reisz employs the frame narrative technique that works so well in the previous books where she tells a story within a story. This time readers get the details behind what happens that year Elle ran away from Soren.

Even though Soren, Kingsley and Nora are separated for most of the book, some very interesting things occur. Soren is off working on his dissertation while Elle finds sanctuary at her mother’s covenant. There she meets a nun named Kyrie who I ended up falling in love with. You never think you’ll enjoy the strange situations Reisz puts her characters in, but somehow it always seems to work itself out. And not only that, it’s also memorable as well.

While that is happening, Kingsley is off in Haiti. Readers who have followed the series so far will know that this is where he meets Juliette. Her story is another interesting one that gives readers the insight to their relationship now. I’m quite amazed by how Reisz is able to connect every single detail together in the end; her execution is flawless and proves once again that she’s a talented, polished writer. 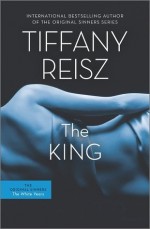 Tiffany Reisz is one of the best erotica writers on the planet. I can’t wait to start this book. I do wish this series had better narration on audiobooks. I know that the author usually had little to no control over that, but it can make all the difference in the world for us audio junkies. I haven’t even seen this one on audio. 🙁

Thanks for the review, I need to catch up on this series.