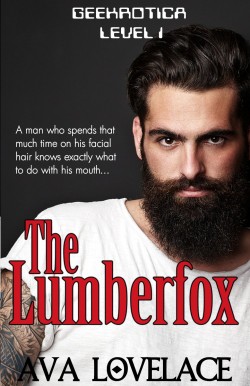 The Lumberfox
by Ava Lovelace

“THE LUMBERFOX is too short, yes, but I enjoyed the hell out of every page, every second and every joke!” ~ Under the Covers

You may have noticed if you follow my reviews that I’m a huge Delilah S. Dawson fan and absolutely LOVE her steampunk series Blud.  Well imagine my surprise when I see her post a new cover image on Facebook including the cover for THE LUMBERFOX.  I mean you can’t scroll past that hottie.  And that’s when I realized she had an alter ego and this was a series of short sexy stories.  Immediate one click.

Instead of getting stuck on the highway, Ryon suggests that they both walk to his apartment just at the next highway exit and wait out the worst of the storm.  What follows is just HOT!  Ryon knows his way around a womans body, and he’s not afraid to show her what she wants no matter where they are 😉

THE LUMBERFOX is smart and geeky sexiness.  It was hot and funny!  I wish there were at least 10 of these for me to read back to back because I definitely would.  It was too short but only by my greedy standards where I would’ve read more about them.  It still wrapped up Tara and Ryon’s story nicely.  So if there’s a little bit of geek in you, then you will want to pick this one up!

Now I can only wonder when the third book is coming out.  I will have to go stalking!

“Let me get this straight. You want me to put on all your dirty clothes, step out into a snowstorm, and follow a complete stranger to his American Psycho apartment?” 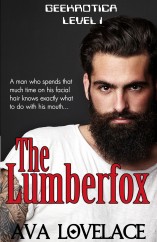 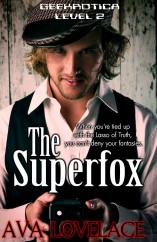 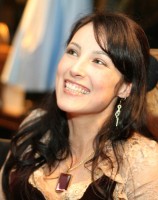 Delilah S. Dawson writes whimsical and dark Fantasy for adults and teens. Her Blud series for Pocket includes Wicked as They Come, Wicked After Midnight, and Wicked as She Wants, winner of the RT Book Reviews Steampunk Book of the Year and May Seal of Excellence for 2013. Her YA debut, Servants of the Storm, is a Southern Gothic Horror set in Savannah, GA, with another YA from Simon Pulse in April 2015, a pre-dystopian called HIT. Her Geekrotica series under pseudonym Ava Lovelace includes The Lumberfox and The Superfox with The Dapperfox on the way.

Delilah teaches writing classes at LitReactor and wrote the Island of Mesmer world for Storium.

Delilah lives with her husband, two small children, a horse, a dog, and two cats in Atlanta.

It’s so short Timitra, you can finish it quickly. Get to it!

After reading your review, I just one-clicked.

I liked the older cover better. I grabbed it based on that cover dang it. I completely agree, it was too short. I wanted more too.

Under the Covers Book Blog
Admin
Reply to  Judy

I think the older cover is a better visual for what the hero looks like, but I find this one very appealing as well. 🙂