Welcome back to UTC, Courtney! Congratulations on your new Contemporary Romance series. Can you tell us a bit about the Cyclone series?

The Cyclone series (I changed the name of the series) centers around a handful of people who are affiliated, loosely, with Cyclone Systems, a massive corporation that produces various computer products.

Cyclone Systems is run by CEO Adam Reynolds (48 years old; started Cyclone when he was 19 after being kicked out of Yale), who grew a garage-size enterprise into a Fortune 500 company with a $413 billion market capitalization. Adam’s son, Blake, has been involved in the company since, basically, his birth. The company makes cool gadgets, and there is a bit of a cult of personality involved.

How many books can we expect in the series?

Either three or five. I’m committing to three; it might be five. The exact answer will depend on whether I continue to enjoy writing them and whether readers seem to want to read them.

TRADE ME is the first book in the series. I’m interested to know about Tina Chen. What do you hope readers will enjoy about her character?

Tina is strong and resilient. She has a plan for her future, and if she can just make everything work out okay in the next few years, it’s going to be great. But–unfortunately–getting to the point where she has a stable job & can help her parents out is going to take some time.

Tina is stubborn, smart, and doesn’t take crap from anyone.

Blake Reynolds is to inherit Cyclone Systems. This will undoubtedly make the sexy man more desirable for readers. As a reader, what appeals to you about billionaires and as a writer, how did you try to accomplish that in this book?

For those who have read my other books, you may know that I have a habit of…not romanticizing things that are romantic tropes. Quite possibly I have read too much about real billionaire CEOs, but there is nothing sexy about billionaires. Nothing. I always said I could never write a book about a billionaire. And then I did.

Blake’s father is the CEO of Cyclone Systems, a company that produces servers, cloud computing and storage, and various consumer electronics. This is Blake’s description of his father:

“Not on top of your game?” I joke instead. “Shit. What do you need? A vacation?”
He doesn’t laugh at this. He folds his arms. “Maybe. Maybe something like that.”
I roll my eyes. I know exactly what it’s like when Dad takes a vacation: He doesn’t. For the last thirty years, he’s worked and worked and worked without stopping, waking up in the middle of the night to leave messages for his chief engineer about every last improvement he’s dreamed up. Going to some beach somewhere doesn’t change his habits; it just means that his key staff have to change time zones to match his schedule.

And this is Blake’s description of watching the funeral of the former Cyclone CFO:

I remember staring at Peter’s casket, seeing Cyclone employees, industry contacts—a crowd, really—surrounding him… There were hundreds of people there, and he knew all of them, every single one, from work.

I always said I could never write a billionaire romance because there is absolutely nothing romantic about being a billionaire.

This is a book about there being nothing romantic about being a billionaire.

What would you say is the greatest challenge in writing Contemporary Romances?

Honestly? There’s so much more research to be done. Seriously, don’t look at me like that. For a historical, I can pick a basic street and put things on it that I need, and boom, I’m done because nobody will know whether there really was a chop shop there during the time.

I do not understand how contemporary writers stop doing research.

I realize that this is the point where I’m supposed to say things that make me sound like a regular, rational individual. Unfortunately, I don’t have typical days. In an ideal day, I would write in the mornings and then take care of business things in the afternoon. My days are rarely ideal. They contain far more panic and far more procrastination. I have weeks where I can’t seem to manage to do anything except watch reruns of Hell’s Kitchen. I have weeks where I somehow manage to do ten thousand things.

If you could only keep one book from your personal bookshelf and part with the rest, which book would it be and why?

You know, this is a really hard question. First, I need someone to write a book about how to get the rest of my bookshelf back. Second…

Okay, just kidding. I don’t know. Honestly. I’m not sure how to face a world where I only have one book. That would definitely force me to spend several weeks watching Hell’s Kitchen reruns, and…just, no. Let’s not go there.

If we were unforgivably rude and looked through your purse right now, what would we find?

You would find that I don’t have a purse. I actually just have a wallet, which holds credit cards and receipts. I’m pretty minimalist. I normally don’t even take my phone with me when I go out. I only ever carry purses at romance conferences, and then I stuff them full of bookmarks and promo stuff that I never remember to give to anyone.

What’s your favorite book to reread?

It depends on my mood! Right now, I have this huge hankering to read Sarah Rees Brennan’s Lynburn Legacy series again. But it changes. Lots. 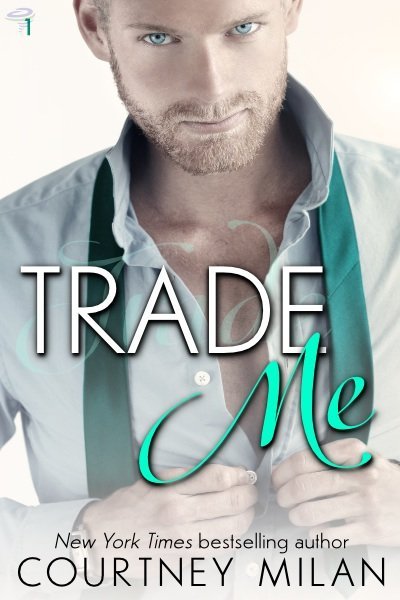 Tina Chen just wants a degree and a job, so her parents never have to worry about making rent again. She has no time for Blake Reynolds, the sexy billionaire who stands to inherit Cyclone Technology. But when he makes an off-hand comment about what it means to be poor, she loses her cool and tells him he couldn’t last a month living her life.

To her shock, Blake offers her a trade: She’ll get his income, his house, his car. In exchange, he’ll work her hours and send money home to her family. No expectations; no future obligations.

But before long, they’re trading not just lives, but secrets, kisses, and heated nights together. No expectations might break Tina’s heart…but Blake’s secrets could ruin her life.

We are giving away a copy of TRADE ME (ebook) to one lucky maiden!

Love the sound of Trade Me…great interview too

Haha I don’t carry a purse either

Great interview. It will be interesting to see how you do a contemporary. Love you historicals! Thank you for sharing. aka Becky

I haven’t read any of Courtney’s books yet but this one sounds good. Enjoyed reading the interview.

I can’t wait to read Trade Me! I always hold out for the paperbacks of Courtney’s books, because I love them so much and prefer having my faves in physical format. (This said, I did crumble and buy The Countess Conspiracy in e-book AND paperback, because I got impatient.

I’m pretty intrigued by a romance about there being “nothing romantic about being a billionaire.” Can’t wait to see how that works out.

Me too. I love the way Ms. Milan does not stereotype her characters. Her books are so much more interesting to read.

i can’t wait to read this one!

Great interview! It was interesting to know that Courtney’s contemporary romance required more research than her historical romances. Thanks for sharing.

can’t wait to read this book

I didn’t know Courtney was writing a contemporary. I love her historicals and this sounds great. Definitely going on the wish list.

I’m looking forward to your spin on contemporary. And meeting Maria, whom I’ve heard so much excitement about.

A great interview thank you. I like the sound of the Cyclone series.

Interesting interview, especially the part about the research. As a reader I had no idea that contemporaries took so much more work in that arena. Very excited to read this book.

Thanks for the interview & giveaway.

First, let me be shallow. I love the cover model. Just plain wow! Great photo. Second, I have always wondered about the fascination with being a billionaire. It seems like a lot of work to me and someone would always be trying to get at you and your money. I think this book sounds like a great concept.

That was a fun interview. Courtney’s response about the only one book… Exactly my reaction. How would you even pick? Why would you even want to live in a world like that?

Trade Me sounds like a must read to me!

How amazing to realize that contemporaries require more research!!

I love Courtney Milan’s historical novels and I am excited to read her new contemporary novels. Although, I will miss the Brothers Sinister series.