Jem paced, running his hands through his hair, then stopped right in front of her. “I kidnapped you, because I needed someone to take care of Avery. She was dying and we couldn’t have the complication of the hospital.”

“Did you hurt me when you kidnapped me?”

“Yes, indirectly, goddammit. Your MC people were keeping an eye on you. I made shit worse.”

“That was already bad to begin with.”

“You should be so fucking angry with me. You  will be.” His eyes looked haunted. “You asked me to take you with us, instead of letting you go back to the hospital—you wanted to come with us. You didn’t say why, but I should’ve known there was trouble. And I told you not to do it and you didn’t listen and it’s our fault.”

She gave him a soft smile. “I’m considered an innocent?”

“Don’t be fucking nice with me, Drea—don’t you fucking dare.” He pointed at her.

“Never,” she deadpanned, and then she stopped, tilted her head and stared at him.

“What is it? Are you remembering something?”

“I think so. Yes, this.” She motioned between them. “This was always the way we interacted, right?”

“When we were kissing,” he said, and she had a sudden jolt through her body, a heat as a memory of her, semiwrapped around him, her legs bare, wishing he wouldn’t pull away.

“I’m prepping for a mission,” he said, but no, he was using that as an excuse. For some reason, Jem couldn’t lie to her . . . at least not well, and he knew it, because then he added, “Because I can’t control myself around you.”

“It would be like you were fucking a stranger,” he told her.

WHEN THE RISKS ARE THIS GREAT…

When Dr. Drea Timmons was kidnapped during Section 8’s last mission, Jem did everything in his power to rescue the woman he’d fallen for—a woman unwillingly recruited for one of S8’s most personal and dangerous covert operations. Drea survived, but at a price. The trauma of her capture has rendered her without a single memory of her ordeal—or any recollection of how violently unpredictable her ex-boyfriend, Danny, an Outlaw Angel, had become, or why she had left him.

IS TRUST EVEN AN OPTION?

When Danny threatens to turn Drea over to the feds, she is forced to go on the run and confront a past that is as deadly as her future. As trouble closes in on both ends, Drea has no choice but to trust Jem, the only man who can help her, the only man whose electrifying touch brings back memories—piece by piece—too stirring to forget. 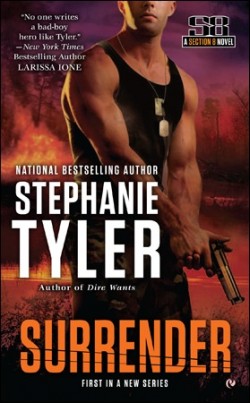 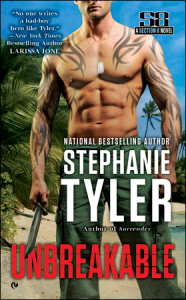 We have a print copy of FRAGMENTED up for grabs for one lucky US maiden!

The whole amnesia angle kinda leaves me lukewarm about this title because I find it’s an overused trope, especially in this genre. That being said, some authors do manage to use it to their advantage, but I’ll most likely start with Stephanie Tyler’s paranormal titles first because that’s more my style.

Sounds like an exciting story, thanks for sharing and for the giveaway!

I’ve read such great reviews for this author. I’m dying to read her books 🙂 Thanks for sharing!

Nice except. ..thank you

It would be a really good book to read and I look forward to reading it.

Stephanie Tyler is always and will always be a genius when it comes to her stories and characters.

Sounds like another great book from Stephanie! Thanks for the excerpt!

Can’t wait to start reading the series. Sounds like they are great books.

I loved the excerpt!!
Thanks for the chance to win!

A very interesting excerpt, going on my TBR! Thanks for the give-away!

I so have to start this series!

Thanks for the review, I enjoyed the excerpt.