You Really Got Me
by Erika Kelly

“But overall, I still enjoyed this take on rock stars.” ~ Under the Covers

I’m torn about this book because for the first half I was really enjoying the story, but after that it sort of lost its spark. The repetitive problems that seemed to be constant just started to get on my nerves.  But overall, I still enjoyed this take on rock stars.  It feels a little more subdued than others I’ve read and that was a nice change of plans.

Emmie Valencia has been working for a record label for years, but never in her dream job.  She’s the boss’s personal assistant and she wants a promotion to A&R.  So she takes a leave of absence and goes to visit her brother in Texas.  Her brother who happens to be in a band trying to get a record contract.  She lives with him and the rest of the band while she’s looking for new talent that she can come back to her boss with and hopefully get that promotion.

But she wasn’t planning on her immediate connection to the manwhore lead singer of her brother’s band, Slater.  Their chemistry is instant and a friendship quickly develops.  Which then leads to more.  I was happy with the pace of Emmie and Slater’s relationship, it set a good foundation and makes it more than believable that they fell in love.

I really liked the hero and the fact that once he falls in love he’s focused and just knows that he wants to be with Emmie.  He’s willing to work through all the problems she throws his way.  He always wants to put her first.  That is delightful to see, especially with the hot lead singer of a band.  That was probably my favorite thing about the story.

I have to honestly say that, although I liked the heroine, her insecurities really were my least favorite thing about this book.  And towards the end they were getting on my nerves.  If I put myself in Slater’s shoes, I would feel as if I’m walking on eggshells because she will always think the worst of any situation before talking things through.  Because she’s not good enough, because he should be with X, Y and Z.  Her insecurities overpowered the story for me, and I just didn’t get to understand the backstory of why she was like that (the thing with her father).

After I read the excerpt for the next book at the end of this one, I’m excited because I liked Derek the best out of all the band members. 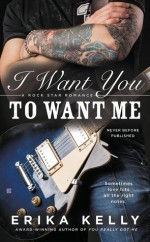 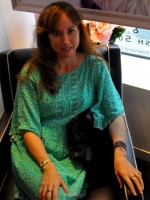 Award-winning author Erika Kelly has been spinning romantic tales all her life—she just didn’t know it. Raised on the classics, she didn’t discover romantic fiction until later in life. From that moment on, she’s been devouring the genre and has found her true voice as an author. Over three decades she’s written poems, screenplays, plays, short stories, and all kinds of women’s fiction novels. Married to the love of her life and raising four children, she’s lived in two countries and seven states, but give her pen and paper, a stack of good books, and a steaming mug of vanilla chai latte and she can make her home anywhere.

You know! I couldn’t figure out how to put it into words, but you articulated well the only thing that really bugged me about this book- her insecurities overwhelmed the story near the end. Yes! That is what I thought too. I was a hair away from saying chuck her then. Can’t wait for the next story.

🙂 Yeah, after that last thing which I understand needed some discussion. The way she handled that and I kept saying Slater forget her! Why go back and try to win her over! Grrrrrr LOL

Thanks for the review, I agree insecure heroines can be endearing at first then they just get annoying.