Cecy arrives at Misha’s estate and takes a seat in the study, directly in front of Misha. “Hi, Misha.”

Misha nods. “So our tormentor appears.”

Cecy frowns. “Be nice or I’ll rip you in half again.”

“You would enjoy that, wouldn’t you?”

Cecy offers an apologetic smile. “You may not believe it, but I suffer along with you. I cried over my keyboard writing A Cursed Bloodline, and it’s not the first time I’ve shed tears for my characters.”

Misha arches a perfect brow. “You are correct. I don’t believe you.” Cecy groans and rubs her tired eyes. “So why do it?” he challenges. “Why permit us to endure all that we have?”

Cecy thinks about it. “It’s not an easy question to answer.”

Misha leans back. “Then take your time. You’ve made it so I have eternity.” He frowns. “Unless you change your mind on a whim and kill me.”

“First off, nothing I do is on a whim. I’ve taken a great deal of time to determine the direction I’d take my series. When I first began writing Weird Girls in 2009, I knew how the series would begin, how it would end, and who wouldn’t survive to see its conclusion.”

“Is that so?” He dismisses the offer for food when a leggy blonde steps in wearing nothing but berry pink pumps and a grin.

Cecy shakes her head as she watches her exit. “Nice, Misha. Real nice.” She straightens and hones in on the blonde’s feet. “Are those my shoes?”

Misha offers one of his more wicked grins. “Forget your choice in footwear. You were saying?”

“Um. Okay. My point is that everything I’ve done and will do is for a reason, no matter how harsh.”

“Says the author who feeds her characters to demons.”

“Only the bad guys. Usually.”

Misha adds a little fang to his smile. “You made me so.”

Misha considers his next question. “What do you hope to achieve with all this suffering you inflict? Character growth?”

“Among other things. I’m also trying to get readers to feel for the character and experience the emotions I bleed onto the page.”

“You know what I mean. Whether it’s anger, heartbreak, humor, or nail-biting suspense, I want the reader to connect with what’s happening.”

“What of the reader who doesn’t want to feel so connected?”

“I imagine if readers are invested in the characters, they are bound to feel something. Even if it’s anger toward what the character was forced to endure. And if they are invested, I’ve done my job as an author.”

“You are known for your angst.”

“I find them memorable.”

“Yet you’re also known for your humor, however dark or inappropriate. Why not indulge us all with more humor?”

Cecy leans back in her chair. “Humor is fun to write. And while I use it to lighten more intense scenes, it’s not always appropriate. A Cursed Bloodline has fewer funny moments because it’s the most emotionally charged novel of the series. But to keep the characters safe would make my books boring. Not to mention that the lack of action and crippling situations wouldn’t have allowed me to stay true to the dangerous world I created.”

“So you’re proud of this torment?”

“I’m proud that my characters are fighters, and strong, and worthy of love.”

For a moment, Misha is quiet then asks, “What should readers ultimately expect from A Cursed Bloodline?”

“That everything will come to a head and that no one will walk away unaffected. No one.”

“Be nice, Misha. What I hope is that readers will trust the direction I’m taking the series and how because of what my characters endure, those who survive will grow from the experience and begin their own journeys.”

Mish scowls. “Those who survive? I may have to kill you.” 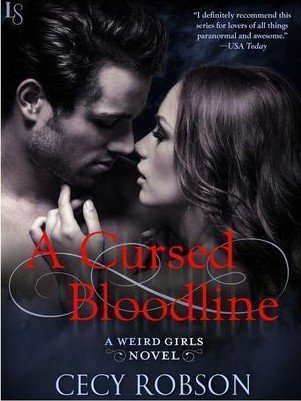 Just when Celia thinks the supernatural world can’t turn deadlier, a new rival emerges, proving just how dangerous a power-hungry were can be.

Since being cursed with unique abilities, Celia Wird and her three sisters have fought the most bloodthirsty preternaturals in the Lake Tahoe region. But Celia’s greatest threat is someone she would have never suspected: Anara, a werewolf Elder who has allowed his hatred for Celia to spiral out of control. In a play for dominance, Anara tortures Celia and gives her an ultimatum: sever her mate bond with pureblood were Aric — or Anara will kill everyone she loves.

From the instant they met, Celia and Aric have shared an attraction that cannot be tamed. So keeping Aric away is impossible, and Aric would sooner die than allow anyone to hurt the woman he loves. Misha, master vampire and Celia’s sworn protector, also finds his way into the chaos, seeking blood from those who have harmed her.

Now Celia and her sisters are caught in the middle of a war driven by lust, fueled by hatred, and destined to end in tragedy. For Anara is a force to be reckoned with, and he will not succumb without robbing Celia of those who hold her heart.

Thank you for the wonderful feature Misha and I had an absolute blast. Wishing you and your followers a happy holiday season!

Thank you for participating!!