National Novel Writing Month (NaNoWriMo) is one of my favorite times of year. My first book published with Samhain Publishing (A Love Worth Biting For) began as one of these crazy NaNo novels. This is my fifth year participating, and my second year participating under my penname.

I was one of those writers who loved to dabble.

Then I decided I wanted to see what I could do. So I signed up for this crazy thing I found online called NaNoWriMo. I had no idea what to expect. There are people like me who love NaNo, and people who detest it to the very essence of their soul. I had no idea if it would work for me, but I really wanted to make it to those two magical words that had eluded me for so long.

I found people who vowed to be my buddies, and I buddied up with everyone who would give me their screen name. Every new name gave me another set of numbers to strive for.

It took me another year before I finally finished the story I wrote. And before you ask…no. You can’t see it. EVER.

That’s when I learned my first NaNo truth.

You have to write crap before you can write the good stuff. You just do. If you haven’t written your crap, get started and get it out of the way. NaNoWriMo is a great place to start. You can’t edit words that aren’t on the page, so give yourself something to start tearing apart.

The second NaNo truth I found through working with my buddies.

Having someone hold you accountable is the best thing ever. If you don’t have someone asking what your word count is on a daily basis there are days where you think you can have “just one day off”. You can’t. You need to write, and having someone remind you when you don’t really want to do it, is a great motivator.

NaNoWriMo is a great time to connect with people. Search for #NaNoWriMo or #NaNoWriMo14 on Twitter and FB. See what people are doing. Are they writing together? Are they doing word sprints? I work best in fifteen minute sprints, but lots of people do 1k1hr, or half hour sprints. Some talk on the NaNoWriMo forums to work out ideas they can’t flesh out on their own, and some just lock themselves in a room with coffee and a stack of takeout menus. Some even do this crazy thing called plotting. Gives this pantser the shivers, but it works for some. Try everything until you find that one magical thing that makes the words fly off your fingers.

Hell, this whole NaNoWriMo thing might not work for you. But just like that strange dinner your momma put in front of you and made you try just one bite, you never know if you like it until you try it.

This year I am dragging folks along with me and posting daily memes and pictures over on my FB page. Feel free to friend me if you want me to harass you too (I won’t do that unless you ask BTW). I’m under Roxy Mews over at NaNoWriMo.org if you want to buddy up with me, and I constantly yak on Twitter too.

If it’s in your heart to put words to the paper, a very wise person once told me there is a reader for every story. Some people read to cry, some to be afraid, and some to laugh. Write what you like to read, write what you can’t keep inside you any longer. Whatever it is…write it. 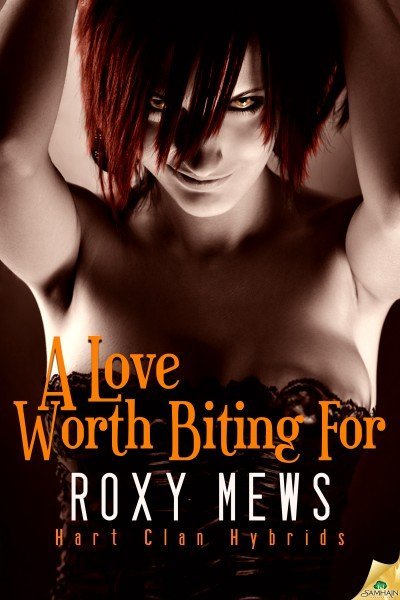 Amber Paulson’s wolf has chosen a mate for her, but Amber is not amused with its pick. Jake Meyers might look amazing in a wet T-shirt and have the cheekbones and strong jaw that artists drool over. Too bad he is missing a pulse.

Jake is a vampire, well, mostly. Then a tall, curvy redhead pops up on his radar and something awakens in him. Even though he tries to stay away, Amber gets under his skin, and his vampire/werewolf heritage starts to become more bark and less bite. For the first time, he feels the call of the moon, and he knows it’s all because of Amber Paulson.

Amber’s trying to stay away, and Jake’s trying to not turn furry. They both fail miserably—and with a lot of sweaty and enjoyable property destruction.

By giving in to her mating call, Amber finds out more than she ever wanted to know about herself, her family, and the rogue wolf who took so much from her so long ago. As her past comes back to bite her, she’ll have to decide what she’s willing to give up for her mate. Her home? Her pack? Her…heartbeat?

This book contains a snarky shifter heroine who could give Sookie a run for her money, a hot hunk of a vampire with a soft (and furry) side, and sex so sizzling that even an inter-species war can’t get in the way.

I’m seeing a lot of new to me authors. Thanks for sharing.