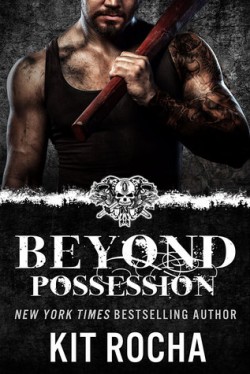 Beyond Possession
by Kit Rocha

“BEYOND POSSESSION is a tremendous leap towards Kit Rocha’s endgame, infusing politics and sizzling romance in an enticing mix.” ~ Under the Covers

After surviving some deadly bullet wounds, Zan is finally back on his feet to try and salvage his relationship with his boss, Dallas O’Kane. He has failed him once and doesn’t plan to again. So when he is tasked with protecting and seducing Tatiana Stone, the daughter of Matthew Stone, Sector Four’s previous leader before Dallas took over.

As you can already tell, this novella is packed with politics and does a great job of making great strides in the overall plot arc. That being said, I definitely think it’s important to read this series in order. This novella doesn’t really standalone very well.

Zan and Tatiana have an explosive romance that oozes plenty of sexual tension. I found Tatiana to be a strong heroine who knew she could be a pawn in Dallas O’Kane’s plans, but chose not to be. Zan also impressed me with his ability to remain true to who he was as an O’Kane but also fall in love believably with Tatiana.

For such a short novella, a lot of the focus is on progressing the storyline and the romance. Sometimes, I thought the balance between the two shifted where the politics became too heavy in cases where I wanted the romance to really shine. But overall, Zan and Tatiana’s romance is well done even if it’s not my favorite of the shorter stories that Kit Rocha has released.

BEYOND POSSESSION is a tremendous leap towards Kit Rocha’s endgame, infusing politics and sizzling romance in an enticing mix.

I love this series so much. I just bought this one. Can’t wait to get started on it. Need to finish current read first.

I love this series, looking forward to reading this week.