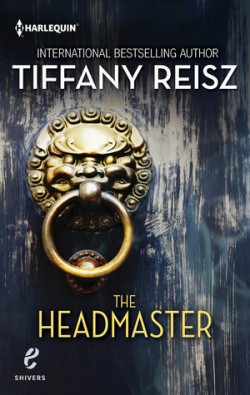 The Headmaster
by Tiffany Reisz

“Tiffany Reisz never ceases to amaze me. Just when you think she can’t conjure up something to impress you, she goes and does something like this.”~ Under the Covers

Tiffany Reisz never ceases to amaze me. Just when you think she can’t conjure up something to impress you, she goes and does something like this. As part of the Halloween special with Harlequin, Reisz has paired up with other authors for this spooky anthology. THE HEADMASTER is Reisz’s contribution to the anthology, featuring an old all-boys school and it’s sexy headmaster, Edwin.

What starts off as a simple twenty-five year old girl looking for a new job at a school, turns into something way more interesting and spooky as the book goes on. It isn’t until the end that the twists and clues all make sense in the end. Reisz really executed this flawlessly. All the clues and all the little details match up so well in the end. Though eerie, there’s also a romantic element to it as well that makes it feel more gothic.

In addition to that, I loved all the characters. Gwen reminds me of a lot of Reisz’s heroines. They are smart and very witty, adding that required humor and feistiness to her books that make them so adorable and fun. Paired with an aloof and restrained hero, Gwen definitely reminds me of a young Nora teasing her older man. Also, if you’re a fan of Sylvain Reynard’s Inferno series, then I think you’ll enjoy this story as well.

I don’t know why it took me so long to read this book but lesson learned. The next time Reisz releases a new book, don’t wait!

Thanks for the review!! 🙂

As long as it’s not a teenager in a school/college situation (for some reason that really bothers me, especially with professors/teachers !!) I’m more than happy!!

Under the Covers Book Blog
Admin
Reply to  Melanie

LOL It’s not! The heroine is twenty five years old and she’s a teacher there. Enjoy!

I love Tiffany Reisz and have bought this book, but haven’t had a chance to read it yet. I will soon though.