Join our newsletter to be the first to hear our latest news! Learn More
Home / Featured Authors / Interview and Giveaway with Lia Riley

Welcome to Under the Covers, Lia!

Thanks so much for having me on Under the Covers!

SIDESWIPED is the second book in your Off the Map series. What has been your inspiration for this series?

I’m interested in exploring how courage lies not in the absence of fear, but the trying despite it. Off the Map takes two damaged characters and invites them to travel down their personal rabbit holes to confront the parts of themselves causing pain, challenge those assumptions and ultimately grow into adults capable of lasting, fulfilling love.

Do you have any celebrities or models in mind when you think of Talia and Bran?

I mishmash faces and features in my head, but let’s say Emma Watson for Talia and a younger Gael Garcia Bernal (especially those dreamy eyes and intense stare…unf) for Bran.

We are always looking for our next book boyfriend. If you had to describe Bran in 140 characters or less, what would you say?

What was the hardest thing to write in this book?

Sideswiped is the “middle” book so it was tricky to seed, but not resolve, conflict or complete the character arcs. I wanted to show Talia and Bran wrestling with their self-actualization, ultimately make some progress, but still leave room for further development.

Let’s try something fun! We love warnings in book descriptions, but if you had to write a warning label about yourself, what would it be?

Does not come equipped with common sense or ability to adult. 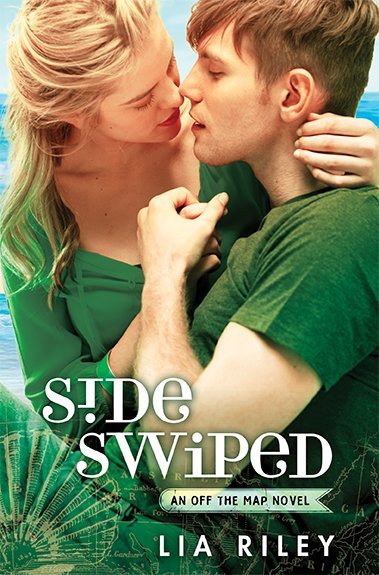 Talia Stolfi has seen more than her share of loss in her twenty-one years. But then fate brought her Bran Lockhart, and her dark world was suddenly and spectacularly illuminated. So if being with Bran means leaving her colorless NorCal life for rugged and wild Australia, then that’s what she’ll do. But as much as Talia longs to give herself over completely to a new beginning, the fears of her past are still lurking in the shadows.

Bran Lockhart knows that living without the beautiful girl who stole his heart will be torment, so he’ll take whatever time with her he can. But even though she has packed up her life in California and is back in his arms for the time being, she can’t stay forever. And the remaining time they have together is ticking by way too fast. Though fate seems determined to tear them apart, they won’t give up without a fight-because while time may have limits, their love is infinite . . .

Sometimes in order to find yourself, you need to venture off the map.

Talia and Bran broke all the rules and navigated dark and stormy emotional waters to be together and now that they finally seem to have found their way back to each other, the winds of change threaten to blow their love off course yet again…

Talia passes out hard from the travel and epic reunion sex. I’m too amped for sleep, so I lie in the dark and trace her spine. Can you love someone too much? No point being afraid, might as well jump in it with both feet. I press my mouth to her neck and she undulates, responsive even from her dreams. If miracles were real, I’d swear we were designed to fit together.

I loop my arm around her waist and hold fast, until our breathing syncs. I’m drifting off when she jerks—hard—once, twice. Her body recoils as she unleashes a lung-tearing scream.

“Talia, wake up. Come on, sweetheart, talk to me.” I clamber over her, hunching protectively. “Open your eyes. It’s Bran. I’ve got you. I’m not letting go.” I keep talking while she flays my chest like she’s drowning under ice, desperate to find a break in the surface.

“I’m right here.” I cradle her while she draws another unsteady gasp. Her hair plasters her forehead in sweaty wisps.

“Give me a minute. I’ll be fine.” She pushes herself to a half-sit and sways with disorientation. “This…this happens sometimes…panic attacks or night terrors…whatever. They seem to come when I drop my guard. Or, I don’t know, maybe it’s the meds. Those pills make me feel like a toxic waste dump.”

“Have you been bad this summer?” The muscles in my neck cord. It shreds my guts to see her hurting. I’d do anything, any fucking thing, to carry her pain. I don’t fully understand the inner workings of OCD but she’s explained that for her, the condition comes in waves. Everything will be rolling along fine, more or less, and then bang—a giant squid grips her brain. She fights hard for recovery, a warrior even when she believes she’s nothing but a coward.

“No, not really.” She grinds her eyes with the backs of her hands. “I kinda danced around the edge of the rabbit hole a few times but never fell inside.”

My muscles release some tension. “Try to go back to sleep. You need the rest. Don’t worry, I’ll keep watch, okay?”

“I’m sorry to be such a psych job. It’s totally shaming.”

Her chin tips down. “Can you talk to me for a little while? Get me out of my fuckball head?”

“Hey now, I got mad love for that head, Captain.” I kiss her brow, acting chill even though I’m scared. How can I get her to settle? Then it hits me. “I want to take you surfing again.”

“Picture yourself out there, in the water, on a board, under the shooting stars.”

“With sharks eyeballing me from the depths?”

“Nah, they’re all busy hunting sea lions or some bloody mischief. This is you, the sea, and the sky. A set rolls in. You can’t make out the wave. The board lifts and you feel the momentum building. There’s fear deep in your belly, sensible, because you can’t see what’s coming or where you’re going. You fight the self-protective instincts, give yourself over, and the next thing you know—you’re having the ride of your life.”

“Thank you.” She flips in my arms so we’re belly to belly. “I mean it. That was beautiful, really, really beautiful. I’m so excited to be here, for right now—to live in the moment. But it’s like I have this…this weird mental stutter. My thoughts keep skipping over the same annoying question like a scratch on vinyl: What will we do?” Tears spill from the corners of her eyes, course silently toward her chin. “My visa.”

Talia’s been granted a three-month student visa to complete her senior thesis in history. In all its benevolent generosity, the Australian government expanded her time in the country by an extra month.

“Don’t believe everything you think.” I wipe her damp cheeks.

“Can you tattoo that on my forehead?”

Maybe it’s my imagination, but the brass alarm clock on the dresser clicks louder.

“I’m not losing you to some shithouse immigration policy, Captain. We will be all right in the end.” I’ve no idea how the hell I’m going to solve this drama but I will figure it out. “We have to hope, otherwise we’re sunk.”

She jerks with surprised laughter.

She hiccups and covers her mouth with her hand, shoulders shaking. It takes me a second to realize she’s giggling.

“I’m funny to you right now?” This girl drives me every sort of crazy.

“I’m not laughing at you.” She works her lips together and unsuccessfully smothers the smile. “It’s—”

“Forget it.” I instinctively stiffen.

“Bran the Optimist.” She grabs my wrists, lifts my palms to her face, and plants a kiss in the center of each one. “I like this side of you.”

“Never mind. I was being dumb.”

“You were awesome.” She pecks the tip of my nose. “And for the record, I love your stupid face.”

I give her a begrudging kiss back. “I love yours too.”

Love isn’t enough of a word.

I wasted almost an entire year of my life implementing a scorched earth policy, not caring who I left burned and broken in my path.

Talia was my oasis. My salvation.

“Don’t give the visa a second thought.” I nestle her against me, rubbing her lower back in easy circles. “I’ll sort this out, I swear to you.”

Even if I don’t have the first fucking clue.

Lia Riley writes offbeat New Adult Romance. After studying at the University of Montana-Missoula, she scoured the world armed only with a backpack, overconfidence and a terrible sense of direction. She counts shooting vodka with a Ukranian mechanic in Antarctica, sipping yerba mate with gauchos in Chile and swilling fourex with stationhands in Outback Australia among her accomplishments. A British literature fanatic at heart, Lia considers Mr. Darcy and Edward Rochester as her fictional boyfriends. Her very patient husband doesn't mind. Much. When not torturing heroes (because c'mon, who doesn't love a good tortured hero?), Lia herds unruly chickens, camps, beach combs, daydreams about as-of-yet unwritten books, wades through a mile-high TBR pile and schemes yet another trip. She and her family live mostly in Northern California.

Around the BoAround the Book Blogosphere #10 — Spooky Reads, Sexy Narrators, and This Girl - Reading Books Like a Boss

[…] also interviewed Lia Riley, author of the Off the Map series.  Check out what Lia has to say about Sideswiped (Book […]