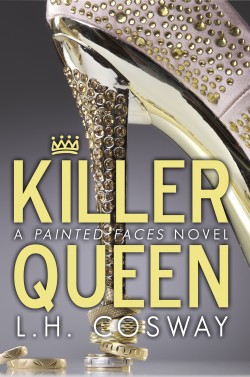 “Nicholas has the perfect blend of alpha that made me tingle all the way to my toes.” ~ Under the Covers

Just when I thought I couldn’t love Nicholas more, we get KILLER QUEEN. I would say PAINTED FACES is required reading before KILLER QUEEN because a lot of things would be better understood and followed in the original story. And then this just fills in the blanks nicely.

had wanted to get into Nicholas head the whole time I read PAINTED FACES, and he truly didn’t disappoint. He lived up to every expectation I had. He made me fall in love again, and hard. He’s such a broken man but I can’t help but love him just the way he is. KILLER QUEEN goes a bit deeper into what makes him tick, what made him be who he is. It shows how he enjoys what he does. And it broke my heart in more than one occassion when he might cry alone for the loss of his mother and the lack of connection and affection he had. Things weren’t easy for Nicholas, but he’s turned out to be an amazing man. And Fred is just the kind of woman that’s perfect for him.

I’m not usually a fan of the re-telling of a story in a different POV books, but KILLER QUEEN might just be one of my favorite books of that kind. It’s a must read for anyone who read PAINTED FACES. And both of these books are must reads for fans of unconventional heroes. Nicholas has the perfect blend of alpha that made me tingle all the way to my toes.  KILLER QUEEN had me smiling, crying and panting, and made me a very happy girl.  And even though their story ends here, the greedy fangirl in me wishes I could read about his every day life from here on out. Maybe a novella? 🙂

L.H. Cosway is a master at her craft, and that is telling stories that will touch your heart and get you so involved you will want to live in the book.  KILLER QUEEN and PAINTED FACES have done that for me.  And I wish I never had to leave.

I have to apologize if this review doesn’t sound coherent much.  That is just because I loved this book so much!

I was all for back-seat taxi shenanigans.

I’ll admit I felt like doing a Patrick Swayze and starting in with some real dirty dancing.  I could dry-fuck on a dance floor like you wouldn’t believe, and I had moves that would make even a stripper blush.

“And if you think vaginas look like flowers, you must have a very unique way of seeing them.  What do you do, close one eye and squint?”

“You should call me Nicholas more often.  It kind of makes me hard.”

When I was done with her, she wouldn’t even know the meaning of the word embarrassment anymore, because I was going to dirty all her clean right up.

I felt like all my life I’d been hungry, but only now had I become aware of it.

“Great fucking tits, Fred.  I can’t wait to suck on the other one next time.”

I knew I was never going to be the same again.

Right then, her body was my church. 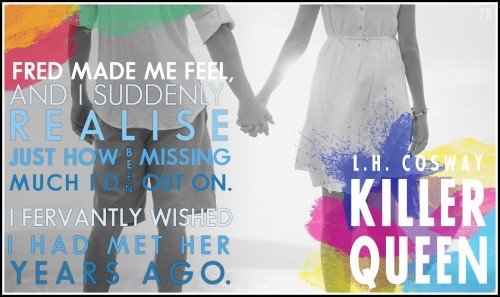 Once we arrived at the club, I was instantly bombarded by loud, garish music and hordes of people gyrating on the dance floor. Normally I preferred a less populated setting. I’d been there, done that, purchased the T-shirt when it came to the club scene, but since Fred was with me, I didn’t mind. A Lady Gaga song came on, and I dragged her onto the dance floor. She was reluctant, but I insisted. I tried to pull her body close to mine, but she manoeuvred away, and I smiled at her fondly when she began to do the robot.

She was nervous, and I thought it was adorable.

I wasn’t going to let her get away with platonic dancing, though, as I spun her around, put my hands on her hips, and brought her body flush with mine. With my front pressed into her back, I was hoping she could feel how she affected me. She remained stiff even as I tried to coax her body to move to the beat. I’ll admit I felt like doing a Patrick Swayze and starting in with some real dirty dancing. I could dry-fuck on a dance floor like you wouldn’t believe, and I had moves that would make even a stripper blush. However, Fred was already mortified by our proximity, and I didn’t want to scare her away.

“Relax,” I told her, my breath hitting the back of her neck. “Follow my lead.”

Her body became a fraction less rigid, and I preened inwardly. She was trying. She wanted this. I allowed my hand to wander up to her neck and sink into her lustrous curls. They called to me with their siren’s song, begging to be touched. I wasn’t sure what the sexiest thing about her was, but I was beginning to think her hair was taking the lead. It was so soft and silky, I wanted to sink my face into it and breathe it in. Totally creepy, yes, but there you had it. 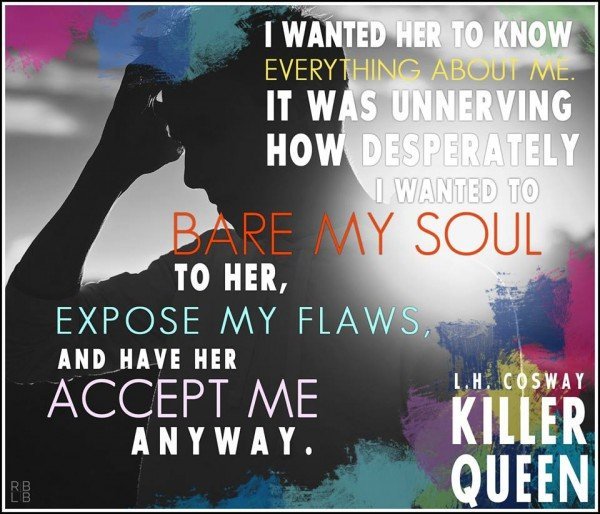 Thanks for the review, I have Painted Faces on my TBR pile and I want to read Killer Queen.