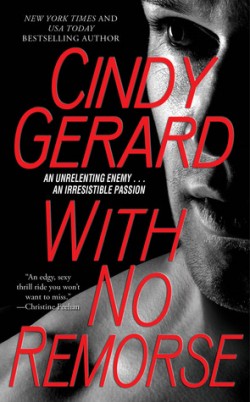 With No Remorse
by Cindy Gerard

“If you’re ever looking for some Romantic Suspense titles to read, you absolutely NEED to read Cindy Gerard’s Black Ops Inc series ” ~ Under the Covers

If you’re ever looking for some Romantic Suspense titles to read, you absolutely NEED to read Cindy Gerard’s Black Ops Inc series (BOI). Not only is there a stunning amount of action and suspense in each of these novels, but I feel like Gerard really knows her stuff about the dangerous locations and the conflicts that the characters encounter in each of the books. While so much research must have gone into the stories, it never once feels bogged down with information, politics or conflict. In fact, I think it’s one of the few romance series where the romance balances out the action. You never feel like the sex or the chemistry is contrived when the hero and heroine are running for their lives.

I’ve read the entire series already but somehow skipped out on Doc’s story for some reason. When I realized that, I made a quick turn around, knowing that I had to read this right away. Luke Colter is known as Doc, but he’s actually not a doctor. He’s a medic. After a “vacation” that has him right in the center of a shoot out, Luke must act if he wants to stay alive. He realizes that the bad men willing to kill innocents are after this boy, so he makes sure to save him before it takes the others out.

But upon further examination, he realizes that in the midst of the gunfire, the chaos and the fact that he’s trying to save himself from getting killed, he misses that the boy is actually a woman. And it’s not just any woman either. It’s internationally known supermodel named Valentina.

I know what you’re thinking? Whhhaaat? But it works so fantastically well because Valentina does not come across as uptight or weak and feeble. In fact, she puts Luke in his place a few times in this story.

What I like most about this series is that the heroine are all very strong beings. They may not be in the best position at the start of the book. In this case, Val is hiding from the paparazzi after a particularly rough break up with her politician ex-husband, when it all goes down, but their self worth and their views on themselves are never put down. Though their scared and have moments of hopelessness throughout the book, they never once give up. And I love that about Val and about each of the girls in this series.

Gerard excels at giving each of her heroes a distinct personality and purpose. I think that’s what makes readers connect with Luke so well. I loved reading about Luke’s past and a few stories of him as a cowboy. The spotlight that Gerard puts on Luke really gives him the chance to shine. I’ve always seen him as just the medic of the group, but no, Luke can get down and dirty as the rest of them. I also freaking love how they are able to handle every situation thrown at them. Imagine how thrilling it would be to watch that in real life! *swoon*

Thanks for the review, I haven’t read any romantic suspense in a while, might have to check this series out.

I love to read romantic suspense books,so this is super for me:)
Great review Annie,thank you 🙂

I haven’t read cindy gerard in a long time but her stories are good and HOT!