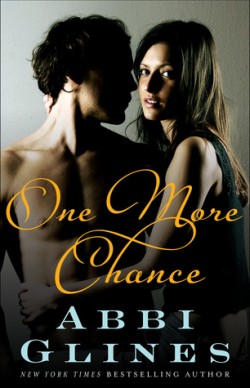 One More Chance
by Abbi Glines

“ONE MORE CHANCE is a sweeter taste of Glines’ writing, but it is no less engaging or sexy. If you’re anything like me, you’ll find yourself flipping through the pages quickly.” ~ Under the Covers

In the second instalment of Grant and Harlow’s story, Abbi Glines takes a much more sweet and heartfelt approach to this novel. While still sexy, there is a noticeable emphasis on the importance of family and the weight of decisions that one person makes.

The story starts off with Grant and Harlow separated. If you’ve read the previous book to their story, then you already know of Harlow’s big secret that was revealed. As a result, she pushes Grant away, thinking that he doesn’t want her anymore. But that’s the exact opposite of what Grant feels. In fact, he is absolutely miserable until he sees her again.

If you’re a fan of Blaire and Rush’s story, then I don’t see you having an issue with this one. Following along a similar route, Grant and Harlow are taking the next step to their relationship. But as it happens, several complications lie in their way, specifically where Harlow’s life is concerned.

Though aware of the warnings and discouragement of her family, Harlow remains strong and makes a decision for herself. She firmly believes that some lives are worth more than others, but it is her unconditional love that truly makes me admire her character.

Glines intersperses the story with a few letters which add a whole other dimension to this book. Sweet and heartbreaking at the same time, they offer comfort while also tugging on the heartstrings of readers.

I also really enjoyed Grant’s character. He’s not afraid of telling Harlow exactly how he feels and as a result, I think readers will fall harder for him. His unconditional love really comes through in the pages, adding to the beautiful story Glines has created. ONE MORE CHANCE has become my favorite Abbi Glines story so far.

It was also nice to read Kiro, Mase’s and even Nan’s POV as well! Poor Kiro has his heart bashed up one too many times and I don’t think he really knows how to handle it all. But what’s beautiful about it is that he still holds a candle to his wife, no matter that she was been gone for awhile.

ONE MORE CHANCE is a sweeter taste of Glines’ writing, but it is no less engaging or sexy. If you’re anything like me, you’ll find yourself flipping through the pages quickly.

Great review, I have only read a few books from Abbi Glines but I have numerous on my TBR pile.

ARC Review: You Were Mine by Abbi Glines | Under the Covers Book Blog