Secret origin of the Associates, confessions & no clown sex!

Little known fact: the Associates started out TOTALLY based on Charlie’s Angels. Do you remember that show? I soooo loved it. One of my favorite things about Charlie’s Angels was that the Angels had special areas of knowledge (though, I just went on Wikipedia to refresh my memory on what the knowledge was, and it didn’t say anything about that – rather, the show is referred to as “jiggle TV”. WTH! I remember the Angels as having specific areas of knowledge. Wasn’t Kate Jackson super brainy? Maybe I was too busy stuffing my face and fighting with my sisters to really pay attention. Also, Wikipedia says they put in Bosley because they worried that viewers wouldn’t accept three women alone fighting crime? Gah!)

Anyway, I made the boss of the Associates this absent figure, like Charlie, that nobody ever met. (Until the second book, when I decided he was too interesting to keep hidden. I actually might go back and stick a point of view chapter of his into the first book. That’s the beauty of self publishing, baby!! A maniacal level of control!!)

So, in my first Associates book, the spy, Cole, is really good at math and logistics. Basically, he looks at bad guy organizations as a system that you can make into an equation. I actually read a few books on logistics and systems and it was kind of fun to integrate it into the book.

In the second book, I decided to make my guy, Macmillan, a linguist who uses his skill to track bad guys. I read a boatload of books on linguistics and got super wonky about it. It was fun! But hard.

So, are you seeing a pattern? On a good day, I’m like, Wow, it’s fun to learn about these different fields of study! Other times I’m like, What the hell have I gotten myself into?!?!

My next agent is going to be a forensic botanist, where plants are used to solve crimes. Needless to say, I’ll be reading some books on plants, and I have a few people in mind to hit up with my questions.

I actually keep lists of possible areas of study for my agents. I really want to do one with an ornithologist, somebody who studies birds—like maybe crows!–but my husband laughs every time I bring it up. Which just makes me want to do it.

In addition to ornithologist specializing in crows, I have also considered the following for my spies or heroines:

Here is a list of areas of expertise I will NOT be having my spies specialize in:

So what do you think? Do you want to read about a spy with clowning abilities? Will you turn up your nose at an accountant spy? Is body language overdone? Can I make ornithology work? Do you have other ideas for me? DO tell!

Thorne McKelvey knows exactly how Nadia sees him—as a brute and a killer just kinky enough to play her sexy games. And that’s how it has to stay. Leaving her was the hardest thing he ever did, but his undercover mission could blow up at any second. No way will he drag Nadia down with him.

SHE CAN’T RISK HER HEART.

Maybe it was foolish to fall in love with her late father’s deadliest henchman, but Nadia Volkov’s not sorry; without Thorne she wouldn’t have their beautiful little boy. There’s nothing she won’t do to protect Benny, which means she must hide his identity—especially from his father.

Now Thorne has burst back into her home, searching for clues to a gangland mystery…and stirring a hunger Nadia hasn’t felt in two years. But Benny’s identity isn’t the only secret she’s keeping, and things are turning deadly. Can Thorne and Nadia trust each other long enough to stay alive and have a chance at happiness?

BUY “INTO THE SHADOWS” NOW 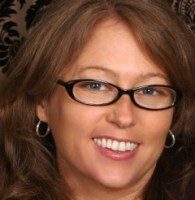 I write romantic suspense, urban fantasy, and some books that don’t have any genre at all. I’ve been published by Random House, Samhain, and self published, too. I guess I get around!

I live in Minnesota (complete with an accent that people sometimes laugh at) in an old 1920′s condo with my awesome writer husband and two cats. I love to run and also to read, even though I’m probably the slowest reader ever. And I love to eat chocolate and Mexican food, and if you invite me to your party, your cheese plate will be in even more danger than one of my suspense heroines.

Also, I use too many exclamation marks, I care deeply about animals and finding ways to help them, I work a day job as a freelance marketing writer, and I dream that someday I’ll having the time to do all the crafts in the many craft newsletters I subscribe to. But I guess I’m having too much fun throwing my favorite characters into dangerous and sometimes steamy adventures.

Carolyn is giving away a digital copy of INTO THE SHADOWS.

An accountant spy would be so cool, especially if she were a woman! A clown would absolutely have to be the villain. Too creepy!

Yes, I agree. Actually, that’s not a bad idea about the villain…..

You probably could make ornithology work. Could have a haven for the birds and the people who look after them and the people have secrets and pasts that not even their family knows about. And after watching “IT” by Steven King a few years back, there’s no way I’d be watching a clown whose a spy. Wouldn’t trust them. I’d trust a Mime before a clown.

There is something about that ornithology. And, did you know that crows recognize people and remember people who were mean to them? anyway, I could not love more that you have that parsed: trusting mimes before clowns. lol.

I’m glad that you’re here today because now I know who you are. I was a total Charlie’s Angels addict as well and remember areas of expertice. The Bosley thing makes sense if you think about the time period. You have me intrigued with the bees. Can they find a way to get rid of the wasps and hornets? I’ve always been interested in wilderness survival, but in reality I’d probably make a nice meal for a bear once I was covered in poison Ivy and Oak. I’ve got to be honest with the magician thing though…right now I’m picturing… Read more »

Thanks so much for your comment! Yes, you’re right about the Bosley thing, and lol on Penn and Teller!! So funny you’d bring them in. Rabbit, anyone?

I remember watching reruns of Charlies Angels growing up and absolutely loved that it was chicks kicking butt! I ADORE your covers! Thanks for coming by! 🙂

Thanks so much, Amber! Yeah, Charlie’s Angels rocked.

i would probably skip the clown thing…unless you were going for a ‘stephanie plum’ type story….however the others would be pretty cool…

Yes, good point!! The clown thing would actually be great in a Stephanie Plum book.

Timitra,
Agreed, a clown could be endearing, but hard to make one hot, tortured, and dangerous.

Something involving Physics could be interesting. A story involving a maniac trying to destroy the world by creating a black hole.
Please no clowns, hate them, so creepy.

Oooh, something with physics!! I hadn’t thought of that!

Sounds fantastic. The heading had me intrigued right from the start.

well… right now, I’d have to say that even if it sounds wacky on paper (haha), I trust the author have a good reason for their characters to “specialize” in the wacky and I trust that they will make it believable. So while I say instinctively no to a lot on your “not” list… who knows 😉 Point in case, I’m watching Sharknado 2 right now and it’s the most implausible, terrible movie but I love it! I think the urban tracker would be very cool… don’t know how you’d do it w/out electronics… thanks for sharing!

Hey, thanks for the vote of confidence, Erin. I guess if Sharknado works, who knows where the line is!!

The fact that this series is based on Charlie’s Angels makes me love it even more! I would really love to read a heroine that is super nerdy puzzle solving detective abilities. This sounds right up my alley!

Thanks, Ruth!! The puzzle angle *does* have possibilities.

I agree that the Clown would be creepy and I think the super nerdy puzzle solving detective abilities sounds pretty cool. The description also kind of reminds me of the tv show Leverage.

ooh, I don’t know that show, but it sounds like I should check it out.

This whole series sound interesting. I’m so glad I wondered here and set my eyes on this 🙂 I’m intrigued! (and I hate clowns 🙂 )

I hate clowns… but you make everything work so… +1 for the clowns?