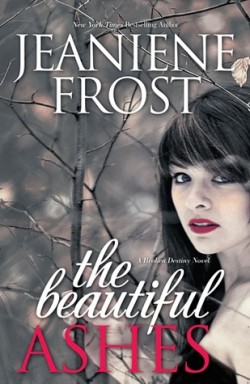 The Beautiful Ashes
by Jeaniene Frost

“THE BEAUTIFUL ASHES will introduce us to a world of myth and mayhem.” ~ Under the Covers

First things first, I want a few things to be known. I’m a fan of all of Jeaniene Frost’s books and I also read quite a few New Adult books as well. So upon hearing that Frost was going to tackle the NA genre, I was both intrigued and excited.

If you’re like me and are a fan of either, you’re going to have expectations. But what I found with THE BEAUTIFUL ASHES is that it doesn’t fit just one genre to me. Though marketed as New Adult, Frost’s writing still has the Urban Fantasy element to it that is showcased by her pacing and mythology of her story, yet what makes this book New Adult is simply the fact that our main protagonist is twenty years old. Ivy is discovering a whole other life she has never known before and is running blindly for her life for most of the book. It’s a journey of discovery for her so I can understand the New Adult angle. However, if I had to choose a genre it had to fit under, it would be Young Adult, regardless of the character’s ages. That being said, I hope when you start this book, you go in with an open mind because I think a lot of great books don’t fit into one genre anyways. If you’ve read and enjoyed Jessica Sorensen’s Shattered Promises series (which is a NA Paranormal much like this one), then you’ll love THE BEAUTIFUL ASHES.

Okay, enough about that. Let me get into what I liked about the story. Frost creates an interesting world here. Filled with dangerous demons, hallowed places and a hunt for a weapon, she doesn’t fall short when it comes to the worldbuilding. With how the book ends though, it is clear that we’ve only just reached the tip of what the author had planned. I’m expecting bigger things to come.

In terms of the romance between Adrian and Ivy, I love the prophecy that states Adrian will somehow betray her. It puts a lot of things into perspective and while the both of the make mistakes, it’s their hopefulness that they can be together in the end that is inspiring.

Some of the things I wished more of centered more on Ivy’s character. At twenty, there were times when her dialogue felt younger. She whines and says inappropriate things at times and while it adds to the comic relief, it makes her sound younger than she really is. Although I do understand that Ivy is kept in the dark for much of the book. I feel that if Zach and Adrian had informed her more about the world instead of just thrusting her into it, she would have a far more eloquent narrative. But since everything we read is from her POV, it’s hard to see outside of her head if one isn’t willing to look.

THE BEAUTIFUL ASHES will introduce us to a world of myth and mayhem. An intriguing start to what should be a promising series.

The Beautiful Ashes is out!

Thanks for the review, I haven’t read any books by Jeaniene Frost.

Well let me just put you at ease here, the reason why companies offer a “no win, no fee” policy is because the lawyers will bill the INSURANCE
of the person they are claiming against, therefore covering ALL the cost.
The leader feels that they need to serve their followers rather than force upon them what they want.
This means that it can be used in any number of
productions; common uses for stock footage are documentaries, television programmes, news items,
sports reviews, independent films, commercials, and movies.