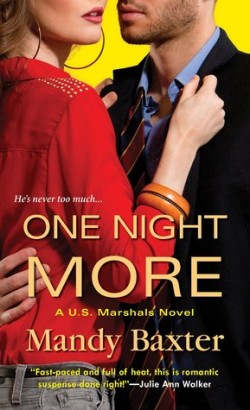 One Night More
by Mandy Baxter

“ONE NIGHT MORE is a delightful dance of suspense and steamy romance. ” ~ Under the Covers

Mandy Baxter kickstarts her U.S. Marshals series with a hot romp in the sack between her U.S. Marshal hottie, Galen Kelly and journalist heroine, Harper Allen. The night is filled with explosive chemistry but once the morning light comes, the flame is quick to burn out when Galen needs to leave for an assignment.

A year has passed and when an incident involving a well-known senator and Harper makes the news, Galen is recruited to protect her from the killer. Though both remember their night together with intense vividness, Galen pretends to not remember because it would put his job at stake and he isn’t willing to allow anyone, not even his best friend, Landon to watch over Harper. She means too much to him to do that.

However, Harper isn’t the frail little being that Galen makes her out to be. She doesn’t need protecting, though it’s probably wise that she stays behind closed doors. But Harper has a mind of her own, which definitely makes Galen’s job more difficult. I LOVED Harper. I found that her reactions to a lot of the suspenseful events in this book to be fun and endearing and quite realistic actually. Nothing seemed too over the top and I like that about Baxter’s writing quite a bit. Everything has a logical approach and as a result, I think it makes this first book a strong one to start with.

The beginning is quite easy-going as Baxter sets up the scene in the first 20% of the book. While in the end, I could understand why that initial meeting and first sexual encounter was needed to be shown rather than told in the beginning, it did feel a little bit too relaxed. I much preferred when the book hit the 20% mark as the author really sets the book into motion and we finally get Galen and Harper together again. I think it would have also made it easier for readers to understand why Galen acted the way he did when he saw and recognized Harper after a year had passed instead of getting frustrated with their communication error. Yet, nevertheless, I was completely sold on them by the end.

The U.S. Marshals series definitely takes a more Contemporary Romance approach with several good suspense aspects that kick things up a notch. If you’re a fan of Julie James’ FBI/US Attorney series, then you’ll definitely enjoy Baxter’s debut into the genre. ONE NIGHT MORE is a delightful dance of suspense and steamy romance.

Mandy Baxter lives in rural Idaho. She’s a part-time pet wrangler, a full-time sun worshiper, and only goes out into the cold when coerced. She loves black clothes, pink appliances and thinks junk food should be a recognized food group. In the summer, she can be found sitting by the lake, enjoying the view from her dock.

I think I check this book out. I’ve been wanting to check out some more Contemp books. =))