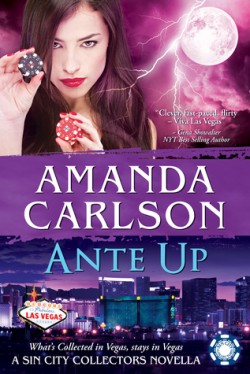 Ante Up
by Amanda Carlson

“ANTE UP dials up the action and the heat in the latest instalment of the Sin Collectors series.” ~ Under the Covers

There aren’t many authors out there who are consistently able to produce quality, full-bodied novellas but I think it’s safe to say that Amanda Carlson is one of the lucky few who is able to do this with her stories. In ANTE UP, Diesel Jones is tasked with one more assignment before he can become a Collector. As a shifter, DJ has a strange reaction when there’s a full moon out and he and his brother, Luke try their best to keep that beast at bay.

Meanwhile, Sofia Cabrera is the new witch on the block who finds herself the victim of some strange dreams. The threat isn’t one of the body, but one of the mind, which puts Sofia into a state of alarm as secrets from her friend, Ginger’s past comes back to haunt all of them.

While Amanda Carlson takes her time outlining all the major details about the incubus, shifter and witch relations into this novella, it doesn’t ever feel overloaded with information or mythology. Similarly, Carlson adds dimension to her cast of characters as previous characters come to play an important part to this story as well. I suspect that as the series goes on, more of the world will be revealed, giving readers more of a reason to be excited.

In ANTE UP, I felt as if the romance was put on the backburner for the first half of the story. It isn’t until Diesel and Sofia can no longer resist each other that they fall into temptation and when they do…damn! It’s a scorcher!

ANTE UP dials up the action and the heat in the latest instalment of the Sin Collectors series.

Up for grabs is 10 digital copies of ANTE UP

Let us know your thoughts in the comment box below!

I’m about 20% into this and I’m loving it. I think these books are great.

going on my wishlist! They sound awesome!

It’s interesting to read about an author who concentrates on novellas. I’d be curious to find out more!

I enjoy her writing…looking forward to this.

Thanks for the chance to win!
Sounds like a great read!!

I’m really living this series. The first book Aces Wild was fantastic. I’ve been really eager read this next one.

What a fascinating series! I have added it to my TBR list. Thanks for the great giveaway.

Congrats to all winners!

ARC Review: All In by Amanda Carlson - Under the Covers Book Blog