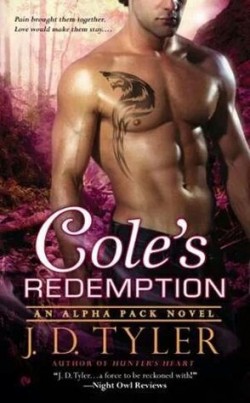 “The sense of family and camaraderie between the members of this pack makes this one of my favorite shifter series.” ~ Under the Covers

I’ve been a fan of this series from the very beginning.  I love the original concept of the shifters with psychic powers.  It adds another level to this story that’s deeper than your run of the mill shifter book.  That’s being said, I didn’t connect as much with the previous book in the series.

But COLE’S REDEMPTION was better.  Not quite what I have expected from this series in the past, but still much enjoyable.  Zander, the pack Healer, had been badly hurt in previous books and has been slowly healing.  Of course, he hasn’t recovered fully and his hearing loss seems to be a permanent thing.  Still, he’s slowly starting to get back into the way of the pack and being active.  That is until he finds his mate.

The long lost daughter of their pack leader Nick, Selene is also a wolf.  But hell bent on revenge.  I actually enjoyed seeing her go through the hate she felt for her father and what she thought he did and start understanding what really happened.  As well as taking to having a mate.

In terms of the storyline, I enjoyed the action in this one a lot. The plot was interesting and kept me listening while the pack interactions drove the story forward.  If I have to say my favorite part about this series, it’s that.  The sense of family and camaraderie between the members of this pack makes this one of my favorite shifter series.

But my favorite thing about this book in particular is the hero.  Zan is a healer and a giver.  He had so much on his plate already with his own demons from his injury and his feeling of not fitting in with his team because he couldn’t perform his old duties.  He had to learn to adapt, find his new place and purpose.  And just as he was the caregiver he is with the pack, he was the same with his new mate.  He took to her better than most.  And as damaged as she was by her own past and her own demons, he was able to heal her as well.

This might be the only instance that I won’t complain about insta-love, although this was pretty quick.  I would’ve liked to have seen a little more of a struggle.  But in the end I think these two worked well together for me.

I’m anxious to see more of Nick (and Blue!) as I think there are still too many things that are not quite making perfect sense for me about him.  And honestly, I’ve been waiting for his HEA since the first book because I just love him.

National Bestselling author J.D. Tyler is best known for her dark, sexy paranormal series Alpha Pack, and the Firefighters of Station Five series under her pseudonym Jo Davis. PRIMAL LAW, the first book in her Alpha Pack series, is the winner of the National Reader’s Choice Award in Paranormal. She's also been a multiple finalist in the Colorado Romance Writers Award of Excellence, a finalist for the Bookseller's Best Award, has captured the HOLT Medallion Award of Merit, and has been two-time nominee for the Australian Romance Readers Award in romantic suspense.

J.D.’s books regularly appear on the Neilson Bookscan, Barnes and Noble, BooksOnBoard, and Amazon bestseller lists, among others, and she was recently named by BooksOnBoard as their #1 Bestselling Romance Author.

When she isn’t writing, J.D.’s idea of a good time certainly isn’t cleaning house (sniff), bungee jumping (not in this lifetime, or the next), or camping (her idea of “roughing it” is a slow bellboy). She enjoys reading, being pampered like the diva she is, and spending time with her awesome family. J.D. lives in Texas with her two teenagers.

I really have to read this author!

I liked this one the best out of the series so far. Zan was a nice change in the typical heroes. I really want the next story after that ending.

I can’t say it was my fave. I loved Kalen!