Unedited excerpt INSIDE OUT Crystal

Part One: Guilt Crystal….I exit my San Francisco hotel room and stare down at the key that had been left for me at the front desk, reading the note one last time. My house is swarming with press. I’m in the room next to yours. We need to review the gallery business tonight. I’ll be in meetings all day tomorrow.

It’s not signed, but I know it’s from Mark. I wonder if he isn’t sure how to sign it. Mark. Mr. Compton. Master. Just the thought that he might have such an expectation has me balling the note up and clenching it in my damp palm. He doesn’t. He’s caught in a nightmare, being eaten alive with guilt over Rebecca and terrified for his mother. He’s not thinking about anything at the moment and I’ve caught him in a few weak moments where I’ve been an escape. And that’s okay. He’s hot. Sexy. Ridiculously sexy. And tormented. And so damn arrogant he could win an award I’d have thought belonged to my father, or one of my two brothers. The kind of man you sleep with and move on.

Only, I can’t move on. His family has become my second family.

I can’t go into his room. I can’t end up naked with him again. It’s starting to affect me beyond the fiery waves of passion. He’s starting to get under my skin and that’s dangerous. I am no submissive and he’s all about power and control, truly a Master in all he does, in all he commands. Underneath all that hardness, though, I’ve seen pieces of a tender, sensitive man, who has a sense of humor and a deep love for his family, his mother in particular.

I turn and take a step, but stop. Dang it, I can’t leave. That would be turning my back on someone who needs me in order to protect myself, and that’s not who I am. And this isn’t about me anyway. It’s about the police on the beach searching for poor Rebecca tonight, and it’s about a broken man who doesn’t even know he’s broken. And it’s about his ailing mother, who I love dearly, and who desperately wants him by her side. Knowing her as I do, and despite how much she wants Mark to be a part of Riptide, she’ll never forgive herself if Allure falls apart because he’s distracted by her. He says he wants me to shut it down and tie up all the loose ends.

I need to do more. I need to save it. And not just for her. For him. For the man beneath the arrogance I’ve captured glimpses of, who has captured a part of me. The one that has let me see the open, bleeding wounds he’s struggling with and denying, and so he’s unable to heal. He’s alone inside his own personal hell, telling himself he can fight it alone. But he can’t. I know this with gut-wrenching clarity.  Right or wrong, decision made, I turn back to the door. I’m going to fight with Mark, despite knowing that I’m likely going to end up bleeding right along with him, and probably without him. But life is too short for regrets. Another fact that I know a little too well. I reach up to swipe the entry card and hesitate, pressing my hands to the wooden surface. In a minute. I’ll go inside in a minute, after I catch my breath that he’s sure to steal.

Lisa Renee Jones is giving away a No In Between canvas bag.  US only. 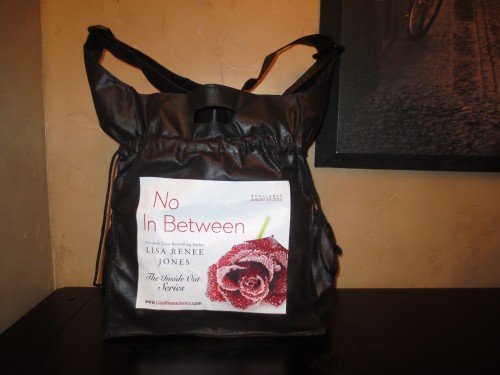 Love this series! I’ll admit it took a while for Mark to grow on me but now that he has…look out that man is hot and tortured! Looking forward to getting another look inside his head!

I love Lisa Renee Jones’s books!!! Thanks for the giveaway!

I love the excerpt!! I can’t wait to read more of Mark and Crystal!

That’s a lot of books in the series

Thanks so much for the chance to win. I love your books!

Thanx for the excerpt AND giveaway!!!!