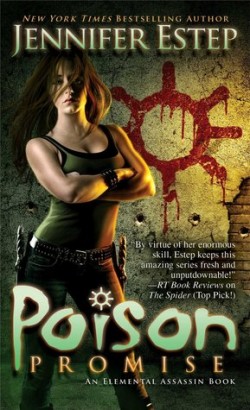 Very rarely do you find a series that gets better with each instalment. In book eleven of the Elemental Assassin series, POISON PROMISE delivers a refreshingly action-paced story featuring Urban Fantasy’s favourite assassin.

Gin Blanco continues to kick ass in this book but when her sister and cop, Bria gets her thoughts muddled on trying to capture the latest bad guy on her list, Gin wants her sister to know that taking out the bad guy isn’t just about killing, it’s also about thinking about the victims as well.

Estep places an emphasis on the crimes of Beauguard. I have to say that I’ve really enjoyed the villains in this series but so far, the current ones are my favorites. With their strong motivations, you come to believe each character despite the fact that you’re supposed to be on Gin’s side. When you have that great of a character opposite your heroine, you’re bound to have igniting tension in every scene.

Gin is faced with a proposition that definitely spices things up for her. I think this decision shows off Estep’s expert planning. Not only is each instalment fresh with its own twists and turns, but the characters remain original and the series as a whole still has places that has yet to venture to.

Additionally, Gin continues to impress me more and more. Whenever I read an Elemental Assassin book, it doesn’t seem far off from a James Bond flim. As a fan of both, I think Estep has all the right elements in all the right places. The balance is hard to strike, but I feel that Estep excels at it with this series.

POISON PROMISE is a lethal strike of ass-kicking action, mischief, that signature badassness that readers expect from Gin Blanco.

Loved this one. I agree, this series just gets better and better!