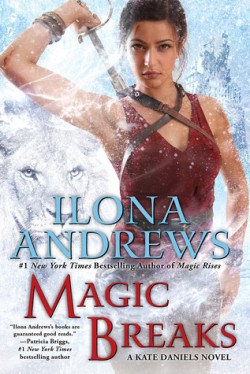 If this review could move it would basically be a happy dance punctuated with some happy little squeaks and lots of jazz hands for good measure. ~ Under the Covers

Former mercenary Kate Daniels has a lot more responsibilities now that she not only owns her own investigations business, but is also the Consort of the Beast Lord, Curran. Not to mention the ever looming threat of an attack from Roland, her father. However, the threat stops being looming and becomes pretty damn imminent where Kate comes face to face with Hugh, Roland’s warlord in Atlanta. Especially when he lays the body of a Master of the Dead at her feet, supposedly murdered by a shifter and gives her twenty four hours to bring him the culprit, otherwise war will be declared and every one she loves will be in mortal danger.

WARNING! Prepare for an review that contains more gushing than an erotica heroine’s knickers! Sorry guys at this point in the Kate Daniels series Ilona Andrews has caught me hook, line and sinker. I can’t guarantee that this review will contain anything more than drooling in written form; if this review could move it would basically be a happy dance punctuated with some happy little squeaks and lots of jazz hands for good measure.

However, there is a very good reason I am so in love with this series, it gives you an Urban Fantasy with plenty of action and excitement coupled with an interesting plot, great characters and a unique world that you can immerse yourself in. Magic Breaks continues on in this vein, with a lot of the story lines that Andrews has been building coming into fruition, including finally getting to meet Roland. The big bad. I had no idea what to expect with Roland, throughout this whole series he is the bogey man, the puppet master and meeting him would result in everyone’s, especially Kate’s imminent demise.Suffice to say that it quite what happened, which made this book and the future books far more interesting.

Now I can’t review a Kate Daniels book with out mentioning my true love, the Beast Lord, Curran. Although these books aren’t heavy on the romance and aren’t particularly steamy, the love between Kate and Curran still plays a key role in the story. And I love it. Their relationship continues to grow in strength as they survive and sometimes thrive on every situation thrown their way. As for the other characters in the book, I really hope the Andrews give them there time to shine (their own books please!) I have especially fallen for our favourite not-so-teen-wolf-anymore Derek and the ever-wicked teenage hyena Ascanio, they have been such great characters throughout the series so far, that I just want to see more of them.

I loved this book, it was packed full of action and revelation and a few shocks that have me impatiently waiting the next book, this series continues on strong  and I will be waiting with baited breath for the next book.

great review thanks for the giveaway

Nice review! Thanks for the give-away!

I cannot wait for this book to release! Each one gets better and better!

I am so forsaking jealous that you got an ARC. This had been my most anticipated book this year and I’m so excited to hear that it doesn’t disappoint. This series is by far my favorite. Kate and Curran are my dream couple and I love reading about them and all of the other amazing secondary characters. Really great review, has me even more eager to read.

Thanks for the review. I’ve heard good things about this series and I’m super bummed I missed the kindle daily deal on these books over the weekend.

Great review. I cant wait to read this book.

I can’t wait for this release. I plan on starting the audio on release day. Great review.

I’m behind on this series but I can’t wait to read this one! Thanks!

This is a series my whole family reads.

Thank you for the review! I am super stoked for this next installment in the series.

I love this series too. It completely deserved your review! Thanks for the giveaway.

My favorite series by far!

Love love love this series! Keep up the good work. Also loved the review, made me want to read it even more!

Such an amazing series!….thanks for the review suzanne

This series has been on my TBR for so long, and meeting them at RT has truly got me wanting them even more. Damn work, taking up all my reading time!

I can’t wait to read this book. I love the genius couple of Ilona Andrews. I am dying to find out what happens with Roland.

The Ilona Andrews team writes the best books on the market today!

I think all of us are on “The Edge” waiting to see what happens with Roland and the most dys-FUN-ctional couple in UF today! Can’t wait for my copy!!!!

Thank you for the giveaway!!!

I want this book so badly. My only dilemma is that it’s not going to match my other books now that the books are being published in hardcover.

Thanks for the review and the giveaway!

SO excited about the book and the giveaway! Thanks.!

Ah! I can’t wait for Magic Breaks! You’re review has definitely added to my anticipation! Been begging my local library to buy copies! Crossing my fingers for the giveaway! 🙂

Love the review! Makes me even more excited to read the book!
I agree with wanting the secondary characters to have their own books so that we can get to know them better. I loved Gunmetal Magic and the novellas with Jim and Dali.
Thanks for the giveaway.

And now I’m even more eager & excited to read this, if that’s possible. Thanks for the review! 🙂

Thank you for providing this.

Thanks for the review – now I am just that much more excited to read the book!

I can’t wait to read it. I love all of their books.

I would love a copy of the new book. I’m very excited!

Very excited 🙂 I am eagerly awaiting the pre-order

I’m excited for the next book too. The review was definitely more gushing than info about the book, but at this point in the series we all have to gush!

Five more days then I can read it for myself!

Gahhh. Every review and mention of the book makes me want to scream and reread my favorite parts (yet again xp). I can’t wait until I can get my hands on magic breaks.

Argh! This book can’t get here soon enough. Reading these raving reviews is pure torture for me (and others I’m sure) since the reviewers have read the book and I haven’t yet got my hands on a copy. Isn’t it release day yet?!