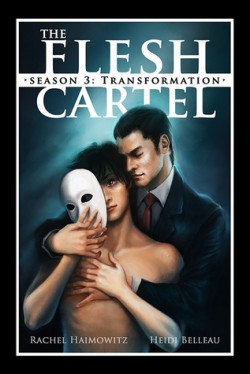 “…brilliant writing aside, this one broke me.” ~ Under the Covers

Wow – okay, so I finally found my breaking point. I thought I would have found it a long time ago, and if this series wasn’t written so brilliantly, I probably would have. But nope, brilliant writing aside, this one broke me. It went too far, and it killed me.

So the smidgen of hope that I had at the end of TRIAL AND ERRORS was of course ripped away from me at the very start of FALSE GODS. The potential escape for Mat and Dougie was thwarted by Roger, who promptly brought the brothers back to Nikolai. Punishment for Dougie is more tortuous than I could handle. I really hope that with time I can forget most of it because it was just that bothersome. The one thing I cannot understand though is how Nikolai allowed that inhumane, disgusting torture to even occur, because while he was trying to teach yet another lesson, the permanent physical harm that could have come to his precious possession was entirely feasible with the conditions into which he placed Dougie.

Thankfully nothing physically permanent did occur, but as always, it was the mental torture that puts Dougie right back into his role of Douglas, Nikolai’s slave, which of course, is probably even worse. And not only does he become yet again “Douglas,” but he fulfills that role to the nth degree, one heartbreaking word at a time.

Belleau and Haimowitz do what they always do best, though – they continue to write a psychosexual thriller like nobody’s business. But once Douglas becomes the uber-perfect slave to Nikolai, they again take this story well beyond my comfort zone, and I’m not sure my heart or my brain can take much more. The ending scene of this installment was equally as awful as the torture Dougie endures at the beginning of the book. I am really hoping that this book will be the worst of the worst, though, because I really do want to finish this series. As I have always said, Belleau and Haimowitz do some seriously good writing – almost too good. I just need a break from the really bad stuff for a little bit to find my happy place.r

Thanks for the review leigh

Thanks for the review Leigh