Welcome back to Under the Covers, Marina. Congrats on the release of From the Moment We Met

Thanks! I am so excited to be back!

For those who do not know you, please tell us a little about yourself!

I am a screenwriter turned romance novelist who has a thing for burgers, beer, and Jane Austin novels. I adore Eggo waffles, hate mayonnaise, and have a bizarre crush on James Spader. I am also a wife, a mother to a teenaged daughter and two spoiled cats, and I am diehard Hart of Dixie fan.

Could you please tell us a bit about the Napa series? Why did you want to write this series?

The St. Helena Vineyard series follows the five siblings of the DeLuca family as they each come to terms with the death of their parents, and in turn open themselves up to the possibility of love and forever. The DeLuca family was inspired by my childhood babysitter, who was the only girl in an Italian family of seven. Her brothers were 100% alpha, extremely over protective, and, since they beat the crap out of anyone who looked at her twice, made dating virtually impossible. I loved the idea of setting a series in wine country and since I lived in St. Helena for a few years, it was the perfect choice to set a series about a big, loud Italian family who were always in each other’s business and even though they irritated the hell out of one another, they were fiercely loyal.

What inspired you to write Tanner and Abby’s Story?! Did you do any special research for this book?

Abby’s story was actually what started it all—at least in my head. I love alpha-heroes, love how protective they are over those they love, and I wondered what it would be like to be the only sister in the middle of all that. I began to wonder how, like my babysitter, Abby would handle finding love when constantly being smothered with it. I knew her hero had to be someone who was an even bigger bad ass than her brothers, someone who couldn’t be pushed around by a bunch of hot-headed Italian men, but someone who could be brought to his knees by a five-foot bit of a woman. In walked Hard Hammer Tanner, former NFL god, sexiest tool belt for hire in the valley, and the one guy Abby never got over.

I have been waiting five books to finally tell their story and I am so happy to finally be able to share it with everyone.

Are there any models or celebrities that inspired your characters? If so, whom?

Not a model so much as a song. I listened to Stay by Florida Georgia Line over and over while writing this book, because I had two people who had lost so much already, and were afraid to fall again only to find themselves alone in the end. After losing her parents, her first love, and then her husband, Abby struggles to understand why she is so easy to leave behind, while Tanner struggles to prove to Abby that he isn’t that guy anymore, so this song really struck a chord with me.

Is St. Helena Vineyard the last of the series. Tell us what’s next? Any projects brewing?!

Oh, there are projects galore. My publisher picked up four more books in the St. Helena Vineyard series, these taking place a few years after FROM THE MOMENT WE MET ends. They follow the Baudouin brothers on their journey toward find love. So be ready for the stern but oh so sexy Sheriff Jonah, the smoking hot smoke jumper Adam, and Army of One soldier Dax as they join in the fun and find their soul mates. The first book, NEED YOU FOR KEEPS releases March 2015.

I have another series releasing with Grand Central November 25, 2014. For this series I went down south and tell the stories of three sexy good old boys who ooze swagger and southern charm. The first book in the Sugar, Georgia series, SUGAR’S TWICE AS SWEET, follows Josephina Harrington, a New York socialite whose perfect life is uprooted when she finds herself dumped, homeless, and broke—and the only asset she has left is her great Aunt Fairchild’s old plantation house in Sugar, Georgia. One look at the dilapidated in and Joie realized that she does need a man—one that wears a tool belt and knows a thing or two about renovations.
With three Master’s Jackets and a nasty sex scandal under his belt, PGA playboy Brett McGraw decides to return home and lay low before he does something else stupid . . . like lose his corporate endorsements. But when Brett calls on the new neighbor to settle a dispute, he’s given a tool belt and a hammer. One look at Joie’s long legs and city-girl sass and playing contractor doesn’t seem so bad. Especially if it means spending his days watching her parade around in those ridiculous heels and his nights in her bed. Too bad for him, she is done with men.

Totally off subject, you recently just came back from RT book convention. How was your experience?

RT was a blast and it was so great seeing you there…although we didn’t get a picture together L I think I ate my way through NOLA…and met so many amazing authors and bloggers and romance lovers, it was a great conference.

Who were you most excited to meet at the convention?

The readers. This was my first conference as a published author and what a rush. I met readers from Australia, China, the UK, and all over America. It was incredible to meet and talk to other romance fans about our shared passion for books and HEA.

If you could pick a drink that would best describe you, what would you pick and why? 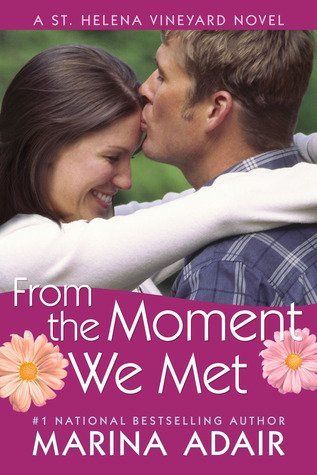 After years of designing her family’s grand wineries (and a few not-so-grand closets on the side), Abby DeLuca knows she has what it takes to be an award-winning interior designer. Newly single, Abby lands the career opportunity of a lifetime and refuses to let anything—or anyone—stand in her way. And that includes St. Helena’s most irresistible contractor, the man who makes her melt every time she sees him—even though he shattered her heart years ago.A former NFL star, Jack “Hard Hammer” Tanner now spends his days doing contract work for the beautiful women of St. Helena—and his nights doing off-the-books projects in their bedrooms. Yet the more time the sexy tool-belt-for-hire spends with Abby, the more he longs to fix her broken heart. Soon, rekindled sparks fly. But when Jack’s dream job comes calling, he faces a tough choice: building in the big leagues, or building forever with his first love.

Marina Adair is a National bestselling author of romance novels. Along with the St. Helena Vineyard series, she is also the author of Tucker's Crossing, part of the Sweet Plains series. She currently lives in a hundred-year-old log cabin, nestled in the majestic redwoods of the Santa Cruz Mountains, with her husband and daughter.

As a writer, Marina is devoted to giving her readers contemporary romance where the towns are small, the personalities large, and the romance explosive.

Marina is giving away a paperback or an audio book of FTMWM (winner’s choice)
to 2 US readers.

Thanks for the posting. Adding to my TBR.

Thanks for the post. I have the first book in my TBR pile. Gotta move it up to the top.

Good interview! I have not started this series but I love the covers and the sound of the books. I’m looking forward to checking out Marina’s upcoming “Southern” series….

Thanks, Maria. and thanks for stopping by!

Oh do check them out, I’m in love with every character Marina writes & cannot wait for the Sugar series release!

thanks for the fun interview and congrats to Marina on the new release! Thanks for sharing 🙂

Thanks for the sweet message, Erin! Glad you liked it!

hmmmm i had not heard of this series but i love small town love stories so thank you!

I love this series. I have read all the books.

This makes me happy, Leanna! Thanks for stopping by!

Thanks for the great interview! I’m adding this series to my wish list! 🙂

Thanks for having me here today, Angela! And thanks everyone for dropping by!

Fantastic interview! I love this series and I’m so excited to read this latest book 🙂 Marina Adair is an amazing author and is on my automatic buy list 😉 Woo Hoo!!!

You made me blush! Thanks for stopping by!!!

Congratulations on the release of From the Moment We Met!

It would be tough to have a bunch of over protective brothers. It sounds like an interesting story.

Awesome interview! Thanks for sharing it and for the giveaway!