Tell us a little bit about your latest release Avenge Me, the first book in the Fifth Avenue Trilogy.

Austin Treffen is a good guy, with his whole life totally together. But all of that starts to crumble when a ghost from the past is unearthed. A letter sent to his pro bono law firm implicates his father in the death of his friend ten years ago.

This sets him and his two friends, Hunter and Alex on the path for revenge. Even knowing revenge will cost Austin everything. But Austin isn’t the only person looking for revenge. Katy Michaels blames Austin’s father for the death of her sister. But when they meet it becomes clear revenge isn’t the only thing they want. Drawn together by an intense, unwanted sexual attraction Austin and Katy have to decide to either embrace love or lose themselves forever in the darkness.

What was it like collaborating on a trilogy with Caitlin Crews and Kate Hewitt?

It’s a very interesting and difficult thing to piece out a series like this. And I think it would’ve been impossible to work on books that are this tightly connected with authors who weren’t quite as generous with their time and with their willingness to share elements around so that every book had great turning point to the overall plot. Both Caitlin and Kate are very easy to communicate with, and I feel like that was essential to the success of the project. Not only that, I consider the two of them to be good friends so that made the process really fun!

Do you draw inspiration for settings from your hometown of Oregon or from other places you’ve traveled to?

When I first started writing I had done very little traveling. I believe it’s possible to write about places you’ve never seen, particularly with the wonders of Google maps at our fingertips. However, since then I’ve done quite a bit of traveling and I do very much enjoy being able to put in the details of smells, sounds, how crowded the street might be, that sort of thing.

When I write about more local settings I have the added bonus of being intimately acquainted with the lay of the land. Little details like knowing what supermarket chains are local, what color the grocery bags would be. We don’t pump our own gas in Oregon, so every station is full service. Because I live here, that something I just know without having to look it up. There’s something really nice about that.

How do you balance your daily life with your writing life?

Hmmm… Probably not as well as I should. In all seriousness, typically I work five days a week from 9 to 5. Sometimes I have a little extra time off because I’m not working on anything pressing, and sometimes when I get deep in a project I prefer to work through the weekends, or go back to my office and do some work after my kids go to bed. So I basically balance it the same way anyone with the family and a job would.

Who is your favorite character in the Fifth Avenue Trilogy?

I think it has to be Austin. He was such a decent guy, but with so much darkness buried inside of him. I found him unbearably sexy.

What is the biggest perk of being a writer?

The biggest perk is going to work in your pajamas. Seriously? I think it’s being involved in an industry to create things I love. I love romance novels, I love to read them. The fact that I get to create them daily is something that never fails to amaze and excite me. Creating new characters, new worlds, writing about love… I never get tired of it. But I also love the pajamas.

In your Cosmo Red Hot Reads book, Crazy Stupid Sex, the main character, Evie, is a multimillionaire app developer who programs her own app for landing a hot guy. What role has technology played in your life as a writer?

Hi, my name is Maisey and I have a twitter addiction. That’s a huge part of my day, and anyone who follows me (@maiseyyates) most definitely knows that. In all seriousness, I’m not sure how I would write if I didn’t have the Internet. It keeps me in contact with friends overseas, it provides a water cooler so that I can interact with “coworkers”. It helps with research, and thanks to the advent of the smart phone, allows me to carry my email with me wherever I go, so I can always be in touch with my editors.

What is your favorite type of alpha male hero?

That’s a very hard question. I love a playboy, but I also love an uptight hero. Though I think my favorite is the wounded alpha. The hero who thought himself infallible, but has suffered a major setback. I love scarred heroes, menu of walks through hell and come out the other side, not entirely undamaged. But who are fixable with the love of a good woman.

Will there be any more stories in the future about the Fifth Avenue characters? (We hope so!)

I think there are so many characters and possibilities left to explore in the Fifth Avenue world, that I would say anything is possible. Keep your eyes on the horizon. 🙂 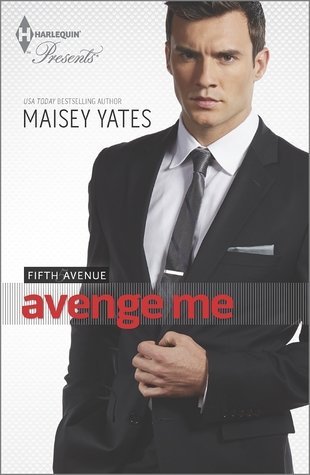 TEN YEARS AGO ONE DEVASTATING NIGHT CHANGED EVERYTHING FOR AUSTIN, HUNTER AND ALEX. NOW THEY MUST EACH PLAY THEIR PART IN THE REVENGE AGAINST THE ONE MAN WHO RUINED IT ALL. Austin Treffen was born into a world of privilege, but behind its gilded doors lies a corruption so sordid New York’s elite would never believe it—especially as his infamous philanthropic father is at its core! With everything he believed in shattered, how can Austin take down his father—risking his family name and those he loves—without any proof? Until one earth-shattering night with Katy Michaels unlocks not only their deepest, most passionate desires but also the key to bringing Jason Treffen’s reign to an end. But with an intense sexual attraction that combines a heady mix of exquisite pleasure and sublime pain, will they satiate their thirst for revenge and each other…or lose themselves forever in the darkness? 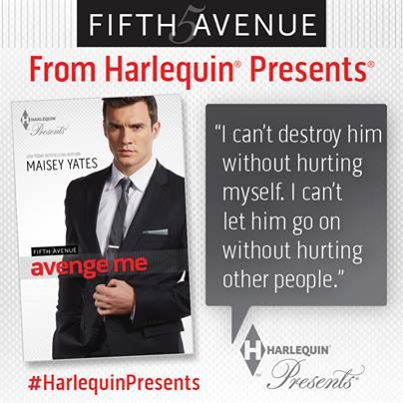 USA Today Bestselling author Maisey Yates lives in rural Oregon with her three children and her husband, whose chiseled jaw and arresting features continue to make her swoon. She feels the epic trek she takes several times a day from her office to her coffee maker is a true example of her pioneer spirit. In 2009, at the age of twenty-three Maisey sold her first book. Since then it’s been a whirlwind of sexy alpha males and happily ever afters, and she wouldn’t have it any other way. Maisey divides her writing time between dark, passionate category romances set just about everywhere on earth and light sexy contemporary romances set practically in her back yard. She believes that she clearly has the best job in the world. 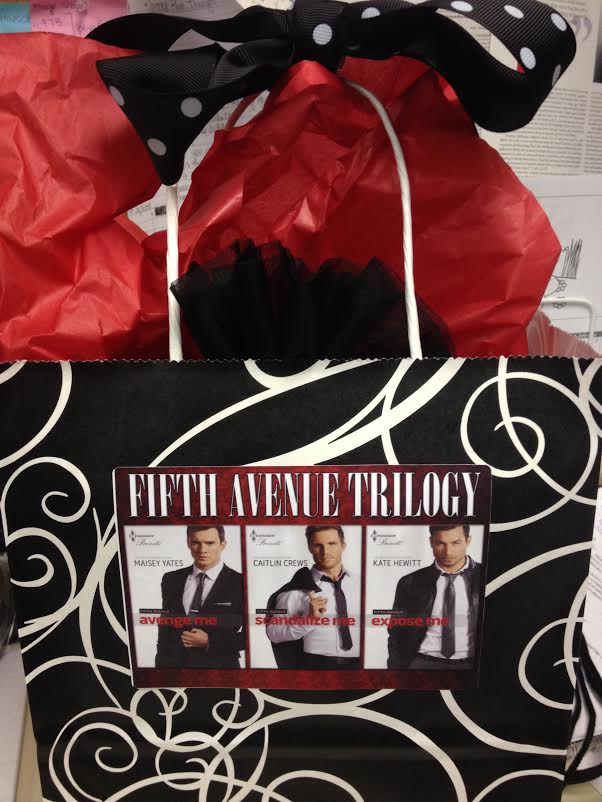 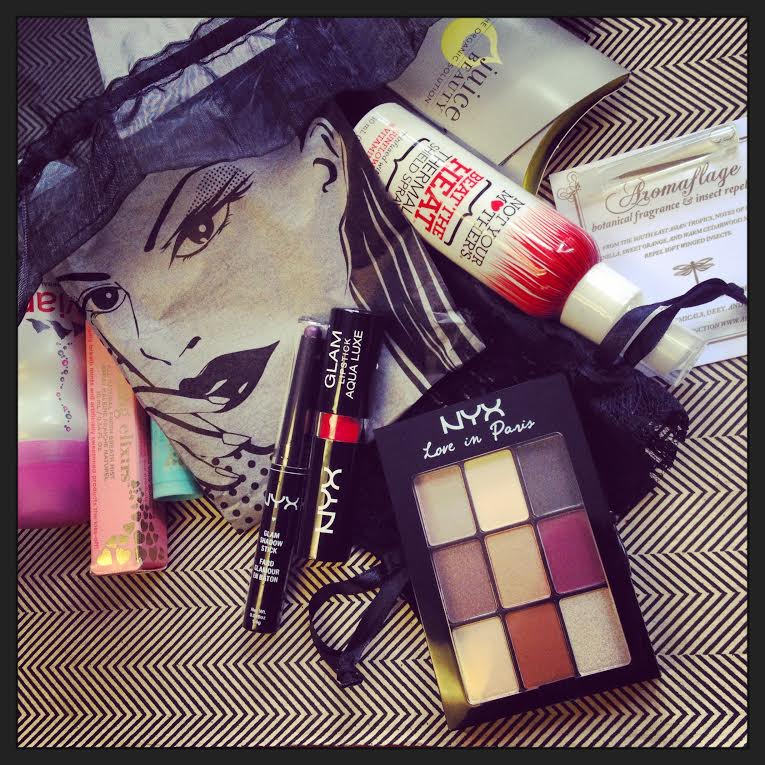 One winner will get a Summer Kit as pictured above.  This kit will contain a book as well!

great interview thanks so much

I totally agree with Maisey. The wounded alpha is also my favourite, but I don’t like the playboy one. And I secretly adore bad boys on motorbikes. I would love to read this book, because the blurb sounds interesting.

Sounds like a great book. I love that Austin works at a Pro Bono law firm.

Thanks for the great interview!
Looking forward to read Avenge Me 🙂

I would like to go to work in my pajamas. 🙂

LOL I also have a Twitter addiction, I haven’t been able to feed that addiction this week as much as I’d like to 🙁

Great interview! I enjoy learning about new authors. Thanks for sharing.

Great interview. I like her view on writing a series with other authors, and of course, getting to work in her pj’s was classic.

congrats to Maisey on the new release! This looks awesome 😉 Thanks for sharing!

Wounded alpha works for me, too! I love the chance for healing & redemption!

Those covers are fabulous! I can’t wait to read this series!

awesome interview..thanks for sharing and for the giveaway!

The books look so amazing. Wonderful interview thank you.

Great interview, it’s interesting to read a series with a collaboration of authors to see how everything comes together in the end 🙂

I’m so looking forward to reading this whole series!!!

Love the interview with Maisey, can’t wait to read Austin and Katy’s story!

Great interview. Can’t wait to read these books. They sound great! 🙂 🙂 Perfect for my vacation 🙂

What a brilliant interview. Thank you for the giveaway <3

Okay I have downloaded Take Me. I have no doubt I’ll be quickly addicted from the sounds of these!

Great interview! Thanks for sharing it and the giveaway!

great interview thank you so much

That was a great interview. Loved it. Thanks for the give away

Love the interview!!! Also thanks for the giveaway